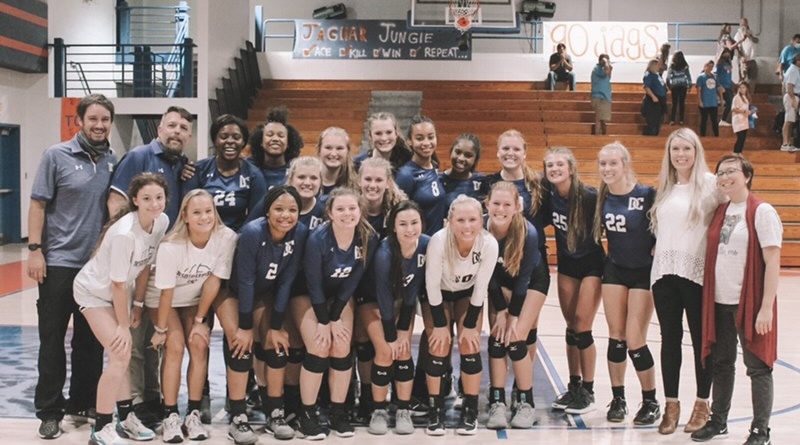 MADISON — It came down to the last set.

But in the end, it was DeSoto Central coming away with the 16-14 win in the fifth and final set and a 3-2 match win over Madison Central to claim the MHSAA Class 6A Volleyball North State Championship on Tuesday night in the all-Lady Jaguar matchup.

DeSoto Central (30-5) will face Brandon, which defeated Hancock 3-1 on the coast Tuesday, for the MHSAA Class 6A Volleyball State Championship Saturday night at 6 p.m. on this same court.

Brandon beat DeSoto Central for the 6A state title in 2017 and 2018. DeSoto Central is seeking their fourth state championship, with the last one coming in 2015.

“That was a great match between two really good teams,” said DeSoto Central coach Margaret Falatko. “We knew coming in we had to pass well, serve well and needed to execute.”

Madison Central eventually tied the match at 14-14, but DeSoto Central got a block and Lindsey Cowart served up an ace that gave the Lady Jaguars the 16-14 win.

“I told the girls we’ve been in this situation before and they had to go execute,” Falatko said. “The sets we lost we didn’t pass well … and if we don’t pass well we can’t run our offense and that’s what we try to do.”

“I talked to the seniors a couple of days ago and I told them to bring their leadership. If we needed to score a point, I wanted Armonie or Gracie to put it away, but I’m so proud of the girls,” Falatko said. “It’s exciting to play for a state championship. To get another shot at one of these, the girls have worked so hard and want this championship.”

“Both sides played their hearts out,” said Madison Central coach Valerie Thames. “Our plan was we were trying to cover their setter, but their outside hitters did what they had to do. I’m proud of the girls, they fought hard and came up short.”

There was plenty of other action around the state, as North and South State champions were crowned in nine other towns.

That championship match is set for 6 p.m. Saturday at Clinton.

The 2A Championship will feature North State Champion Walnut and South State Champ Puckett at noon in Clinton. Walnut won a close 3-2 match against Mantachie Tuesday, and Puckett eased by East Marion 3-0.