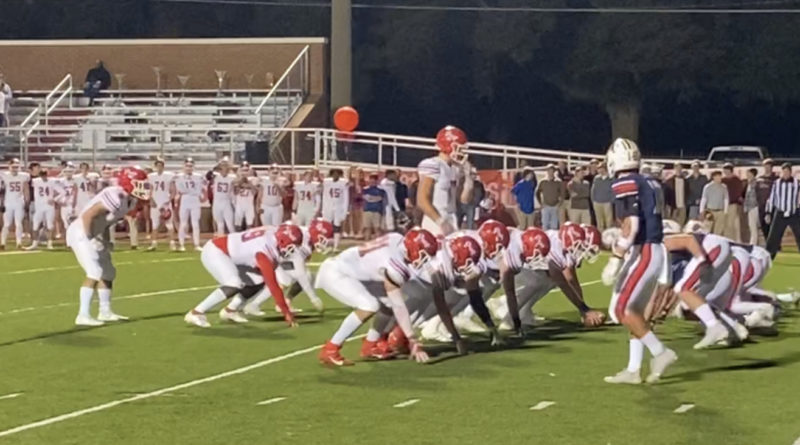 MADISON — It took Madison-Ridgeland Academy a few years to catch up with Jackson Prep, so you’ll just have to excuse the Patriots for how much they enjoyed Friday night’s 50-24 win over their arch-rivals.

Players, students and coaches were still celebrating on the field 20 minutes after the end of the game. And why not? Everything went right for MRA (8-0) on this first cool night of fall.
There were so many heroes for MRA, and most of them came on offense.

Junior Tylor Latham rushed 13 times for 130 yards with two touchdowns and forced and recovered a fumble on defense.

Quarterback Zach Beasley completed 15 of 19 pass attempts for 235 yards with two touchdowns. Not to be outdone, Rayf Vinson scored in three different goal-to-go situations running the ball out of the Wildcat formation.

“We played a great game, man,” MRA coach Herbert Davis said. “We got off to a slow start, but I’m just proud of our kids because they executed tonight. And that’s what I challenge them to do — just come out and be (ourselves) and execute. I felt like if we could do that, we could do some things. And we did.”

MRA, the defending MAIS champs, know well what it’s like to be on the other side of a game like Friday night’s. It wasn’t but two years ago that MRA finally beat their cross-town rivals, only to lose to them in the state championship rematch.

But this first matchup of 2020 wasn’t really close after the opening minutes.

Jackson Prep (5-2) held the lead twice in the first quarter — 7-0 after a score on their first drive of the game and 10-7 following a field goal on their second drive.

Prep quarterback Riley Maddox looked sharp on that opening drive, converting one third-and-long with an 18-yard pass to Thaxton Berch and, later, a 3rd-and-6 by scrambling to move the chains.

Jeffrey Ince capped that drive with a three-yard run to put Prep ahead 7-0.

Maddox finished the night with 231 yards through the air with two touchdowns and added 64 rushing yards, but it wasn’t nearly enough for Prep. These Patriots were without their top running back Matt Jones, who is still recovering from a foot injury.

“Well, we’ve got a lot of work to do to get better, because we’re not good enough right now to play with those guys,” Jackson Prep coach Ricky Black said. “You’ve just got to take your hat off to them, because they played well enough to win and we didn’t.”

Black said the game plan was to put the game in Maddox’s hands, but even as well as he played, Prep was gonna have to score 60 to win.

MRA scored at will – the Pats found the end zone on seven out of their 10 meaningful possessions in the game.

“Our offensive line played great,” Vinson said. “Zach couldn’t have done any better and everyone played great. That’s what we needed to do to win.”

Looking ahead, there’s not much left in the way for MRA to complete its 10-game schedule undefeated. Next week, the Pats travel to Presbyterian Christian (7-2), which suffered a 56-35 loss to Jackson Academy Friday. They’ll close out the regular season at home against Oak Forest on Oct. 30.

Jackson Prep will get another shot at MRA in the playoffs if they can take care of business. Black said he hopes to get Jones, his star tailback, back from injury next week, when Prep hosts Parklane Academy (4-3).