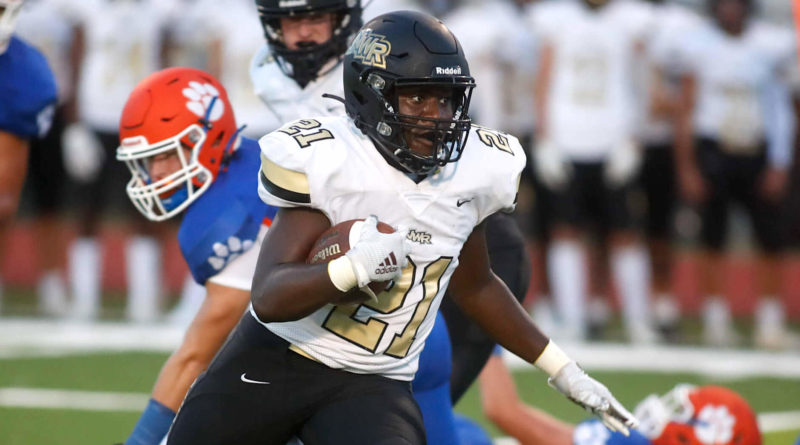 From Oxford wide receiver J’Kyvious Wortham to Northwest Rankin running back Cam Marion, there were several standout performances across the state of Mississippi on Friday, Oct. 16.

Vic Sutton accounted for both touchdowns in Madison Central’s stunning 15-9 upset of No. 1 Starkville. Sutton threw a 25-yard TD pass to Creek Robertson in the first half, then scored the game-winning TD on a 10-yard run with 4:49 left. –GAME STORY

Dorian Robinson had three rushing touchdowns — all in the first half — as the Maroon Tide rolled to a 42-13 Homecoming victory over Long Beach.

Telvin Amos ran for two touchdowns and threw for another as the Gators blanked Columbus 28-0.

Bilbo rushed for two touchdowns and caught a TD pass to lead Vancleave to a 40-28 win over Pass Christian.

Junior Tylor Latham rushed 13 times for 130 yards with two touchdowns and forced and recovered a fumble on defense in MRA’s 50-24 win over Jackson Prep.

Junior tailback Cam Marion rushed for 159 yards on 24 carries, including a key 12-yard run on third-and-7 from the Petal 27-yard-line that set up Northwest Rankin’s game-winning field goal in their 31-30 win over Petal.

Petal’s 31-30 loss to Northwest Rankin spoiled a brilliant passing game from senior Jackson Allen, who completed 32 of 53 passes for 349 yards and a touchdown pass.

Atavian Ray exploded for 169 yards rushing, including a 78-yard scoring sprint, to lead Harrison Central to a dominant 27-7 win over Gulfport in Region 4-6A football Friday night.

Holiday rushed 12 times for 157 yards and five touchdowns, passed for 313 yards and three TDs and returned a kick 77 yards to lead TCPS to a 63-14 win over Vardaman.

Foster had 6 catches for 174 yards and two touchdowns in TCPS’ 63-14 win over Vardaman.

Gibson rushed for 140 yards and three touchdowns in the Green Wave’s 35-14 win over Clarksdale Lee Academy.

Jaylon Buckley rushed 23 times for 150 yards and a touchdown in Union’s 38-33 loss to Scott Central.

Milsap rushed 30 times for 167 yards and three touchdowns in Enterprise’s 33-28 loss to Taylorsville.

Dicenzo Miller Jr. rushed 15 times for 186 yards and three touchdowns in a 24-18 loss to Clarkdale.

Buckhaulter had two touchdown catches, a rushing TD and scored again on a pick six in Hartfield Academy’s 58-20 win over Lamar.

Patrick recorded 18 tackles, including 4 tackles for loss, and a sack in Scott Central’s 38-33 win over Union. Patrick also added a rushing touchdown.

Robertson caught a 25-yard touchdown pass and had 10 tackles and a pass breakup on defense in Madison Central’s 15-9 upset of No. 1 Starkville.