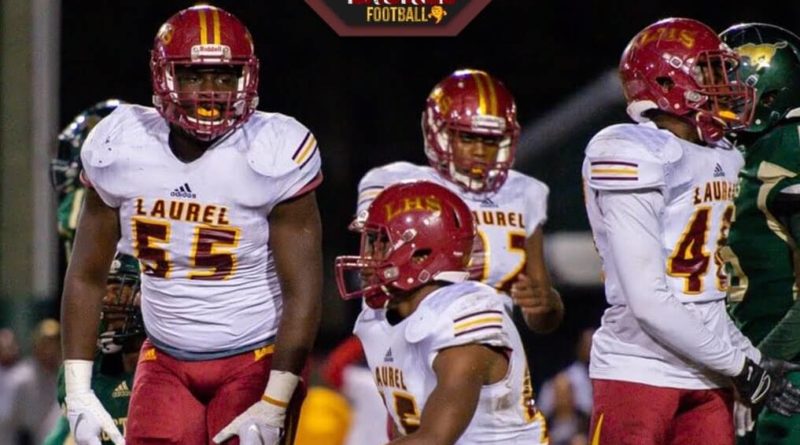 LAUREL – You know what was going through everyone’s minds when Alan Follis hit Marlon Lindsey for a 59-yard touchdown less than three minutes into Friday night’s game against Laurel: No. 4 West Jones is about to roll again.

Well, someone forgot to tell the Tornadoes.

Laurel erased an early 10-0 deficit and held one of the state’s best offenses at bay in a stunning 19-13 win over the previously unbeaten Mustangs between the Bricks at Blair Stadium.

The win was the third in a row for the Tornadoes, a team that was ranked in SBLive’s preseason Power 10 Poll before struggling to an 0-3 start with its two best players sidelined by injuries.

One of those two – Tulane commit Kanarius Johnson – made a huge play in Friday’s upset.

Following the Follis-to-Lindsey opening score, West Jones added a 35-yard field goal off the toe of Joseph Hernandez to take a 10-0 lead with 6:44 to go in the first quarter.

But Laurel responded less than a minute later when quarterback Dexter Scott hit a streaking Johnson for a 69-yard touchdown pass to trim the Mustangs’ lead to 10-6.

On the ensuing West Jones possession, Laurel defensive back Will McCullum stepped in front of an ill-advised pass from Follis and went 25 yards the other way for a pick-6 touchdown.

West Jones tied the game on another Hernandez field goal — this one from 26 yards — late in the second quarter, but the Mustangs (4-1) never led again.

The winning score came with six minutes left in the third quarter, when Scott scrambled for a 34-yard touchdown run to put the Tornadoes ahead for good.

Scott completed 11 of 23 passes for 147 yards and notched touchdowns through the air and on the ground. Johnson finished the night with three catches for 78 yards.

The West Jones defense played a solid game except for a couple of big plays by the Tornadoes as the Mustangs held Arkansas State commit Xavier Evans to only 39 rushing yards on 21 carries. Laurel ran for 65 yards on 30 attempts and ended the night with 212 yards of total offense.

“We wanted to be patient and take what they gave us,” said Earnest.

Laurel played even better on defense. The 391 yards of total offense they gave up might not seem like much to write home about, but the Tornado defense kept Follis and the Mustang offense from converting on 10 of the 11 third downs they faced, picked off four passes and got two turnovers on downs.

“They made several plays, but the bottom line is we as coaches have to do a better job,” West Jones coach Scott Pierson said. “We cannot keep climbing this turnover mountain every week.”

Follis, one of the state’s best quarterbacks, finished the night having completed just 14 of his 33 pass attempts for 196 yards, one touchdown and threw all four picks.