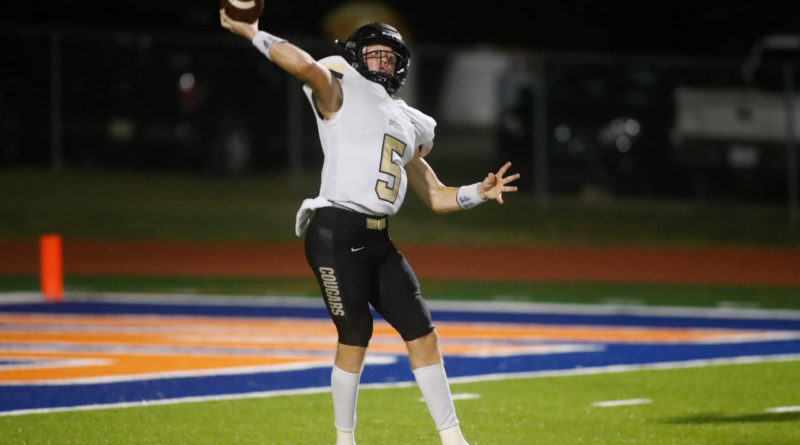 PETAL – Northwest Rankin doesn’t usually come up in conversations as a championship challenger in Class 6A this season.

The Cougars served notice that they intend to make themselves heard in Region 3 after winning a thriller over Petal 31-30 Friday night at Panther Stadium.

Christian Baglione’s 21-yard field goal as time expired gave Northwest Rankin the victory and kept the Cougars tied with Oak Grove for first place in the region at 4-0 (6-1 overall). Petal dropped to 3-4 overall and 1-3 in the region.

“Any time you can come down to Petal and win a football game, I think it’s big,” said NWR coach Toby Collums, who has the Cougars back in the playoffs after a sub-par season in 2019 that saw them miss out on the postseason. “(Petal) is so well-coached, always right there at the end of the year with a chance to win the region and play for South State. So, it’s a big win for us, for sure.”

Northwest won on a gut-check drive in the final two minutes of the game after the Panthers had regained the lead on a 27-yard Nate Jones field goal in a back-and-forth struggle that saw the teams trade the lead four times.

Senior quarterback Caleb Parten converted passes of 12 yards to senior Jordan Cavitt and an 18-yard completion to Haden McKee on a third-and-10.

“The whole game, we played terrible; we didn’t play our brand of football,” said Parten, who was an efficient 11 for 23 for 149 yards and two touchdown passes, both to Cavitt. “That last drive, we’re down by two, we knew what we had to do.

“We’ve done that all year on everybody; nobody’s really stopped us. When we got down there, we just said, ‘let’s do what we always do, drive down and win the ball game.’ I think we’re the best team in the state. If we play our game, I don’t think anyone can beat us.”

The heavy lifting, though, was done by junior tailback Cam Marion. The 6-foot, 192-pounder wasn’t much for fancy footwork, but he ran straight ahead for 159 yards on 24 carries, including a key 12-yard run on third-and-7 from the Petal 27-yard-line that gave Baglione an easier kick.

Petal’s loss spoiled a brilliant passing game from senior Jackson Allen, who completed 32 of 53 passes for 349 yards and a touchdown pass.

His main targets were senior Jeremiah Robinson, who caught 12 balls for 155 yards and senior tight end Garrett Barger, who had 10 catches for 77 yards and the touchdown.

“Our backs are up against the wall, and we’re going to have to win these next three games to give ourselves a chance to make the playoffs,” said Petal coach Marcus Boyles. “I’m extremely proud of our guys; they fought hard.

“We felt like we needed to throw the football, that that would give us the best chance to win.”

Petal also had a huge advantage in time of possession, owning the football 30 minutes and 21 seconds of playing time to 17:39 for NWR.

But the Cougars made the most of the time they had the ball. After Parten was picked off on NWR’s first possession, he came back with a 16-yard scoring strike to give the Cougars the early 7-0 lead.

Petal responded with a 13-play, 79-yard drive with Allen hooking up with Barger for a 6-yard score. The snap for the PAT was bobbled and Jones was unable to get off a kick.

Northwest made it 14-6 when Marion barreled in from 4-yards out early in the second quarter. But the Panthers came right back with a nine-play, 65-yard drive, with Allen running it in for the score from a yard out. Colby Carlisle ran the conversion to tie the game 14-14.

The Panthers grabbed their first lead at the end of the first half, when Jones converted on a 31-yard kick, and Petal then took the opening kickoff of the second half and 73 yards in 14 plays, consuming nearly half of the third quarter, with Robinson scoring on a 1-yard run.

Parten connected on three passes to Cavitt of 15, 25 and 28 yards on a brisk four-play, 73-yard drive, the last for the score.

Petal had two long drives in the fourth quarter – the Panthers converted an amazing 13 of 21 third downs for the game – but settled for field goals both times.

And between those possessions, NWR had a five-play drive for Marion’s second score on a 3-yard run to set up the game’s final fireworks.

“He’s been a mainstay for us all season,” said Culloms. “He’s a hard runner, a hard-nosed kid who’s just a joy to coach.

“It was big for us to hold them to field goals down there, because I don’t think we stopped them very many times.”

The Cougars have home games remaining against Pearl and Oak Grove, with a trip to Meridian sandwiched between those games. Petal is at Meridian next week, then finishes the season with home games scheduled against George County and Terry.