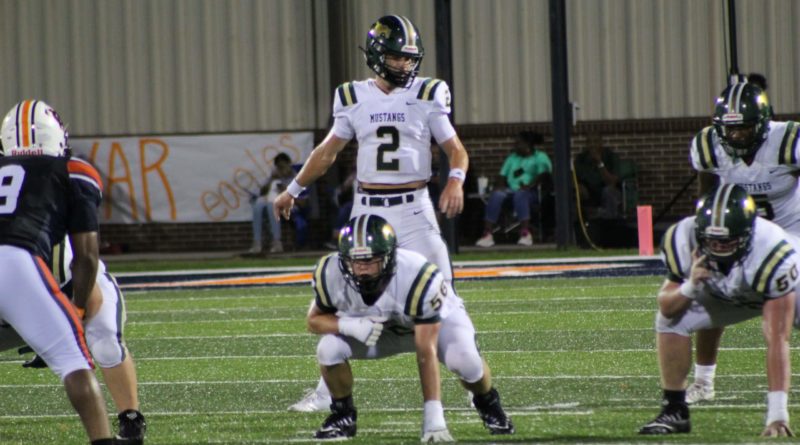 LAUREL – West Jones showed off its offensive versatility Thursday night, mucking out a 35-21 victory over Taylorsville, in a neighborhood scrap that was put together thanks to the COVID-19 pandemic.

The Mustangs, ranked No. 5 in the SBLive Power 10 and third in the Class 5A rankings, improved to 4-0 overall; Taylorsville, the top-ranked team in Class 2A, lost for the first time this season after four-straight victories to open the season

West Jones was coming out of a 14-day quarantine this week, resulting in three weeks without playing, and it showed. The Mustangs turned the ball over four times on three fumbles and an interception, and they were penalized 11 times for 97 yards.

“We got our linemen back on Tuesday, and practiced,” said West Jones coach Scott Pierson. “Our timing was a little off and we weren’t as sharp as we needed to be. But we were able to establish our running game, which we needed to do under the conditions.”

Indeed, a steady rain fell for most of the game and it hampered both offenses. But West Jones was able to establish a ball-control offense that churned out 254 yards on the ground.

The Mustangs set the tone the first time they had the ball, after their defense stopped the Tartars on a fourth down at the West Jones 41-yard-line.

West used 18 plays and more than eight minutes off the clock to get into the end zone on a 1-yard run by Kendorean Russell, the first of three scores by the senior goal-line specialist.

But the heavy lifting was done by senior Kentrel Pruitt, who carried six times on the drive. For the game, Pruitt finished with 92 hard-earned yards on 21 carries.

Taylorsville answered with a four-play, 50-yard scoring drive, capped by a 2-yard run by senior quarterback Ty Keyes. But the wet conditions made things tough for the Tartar leader, who was picked off twice.

“Once the ball got wet, it was hard to throw,” said Pierson. “So our game plan was to run as much as we could.”

The Mustangs took the lead for good on the ensuing possession as Joshua McDonald burst through the middle of the line and dashed 53 yards for a score. Russell made it 21-7 on a 4-yard run after the defense recovered a Tartar fumble at the 10-yard line.

“They’re a very good team, very well-coached,” said Taylorsville coach Mitch Evans. “Our kids fought hard, but we made some mistakes at key points in the game that hurt us.”

The Tartars got back in the game midway through the third quarter, cashing in an 11-play, 46-yard drive, with Jeffrey Pittman scoring from 4 yards out.

Pruitt gave the Mustangs another two-touchdown lead on a 7-yard run, but Taylorsville answered with its best play of the night, a 74-yard bomb from Keyes to Arterious Miller early in the fourth quarter.

After missing the previous PAT, the Tartars were successful on a pass from Keyes to Miller for the conversion.

But the West Jones running attack was too much in the fourth quarter, and this time it was quarterback Alan Follis who had the big runs, carrying for gains of 9 and 16 yards before Russell capped the scoring with a 2-yard run.

With the two schools just 15 miles apart, this might be what it takes to renew what was once a spirited rivalry, before West Jones grew to 5A size.

“We play them in baseball, basketball, every other sport, so this is a rivalry I’d like to see renewed,” said Evans.

Both teams will be on the road next week as they belatedly open region play. Taylorsville will be at Enterprise-Clarke in Region 5-2A, while West Jones is at Laurel in a Region 3-5A clash.