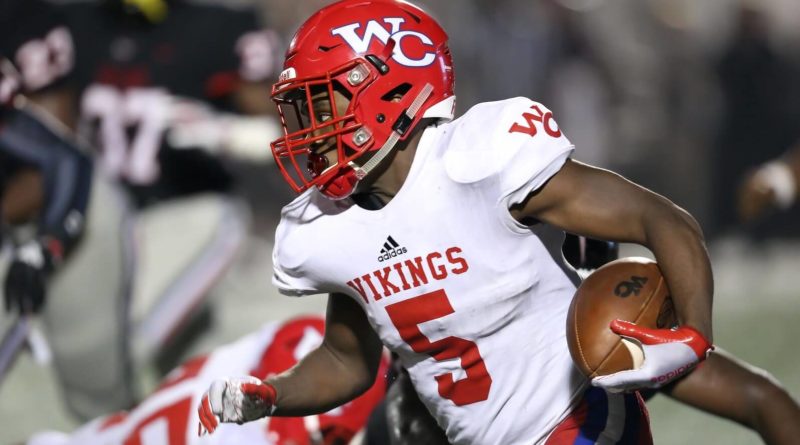 VICKSBURG — It was obvious early on Thursday night that No. 7 Warren Central and No. 9 Madison Central were in for one of those defensive slug-fests here at Robert Morgan Stadium.

Luckily for the 11 brothers from Warren Central — a self-ascribed title adopted by these Vikings — that was the plan from the get-go.

Warren Central did just enough on offense and capitalized on Madison’s miscues on the way to an 8-0 win to remain unbeaten and move to 2-0 in Region 2.

“(This defense) is really fun to be around,” Warren Central coach Josh Morgan said. “We don’t have a hero defense, they just love each other and they play for each other. They’ve been fun to coach, fun to meet with and fun to watch.”

Warren Central (5-0) picked up all the points they needed to win on the first drive of the game. Madison Central (5-2, 2-1 in Region 2) had quarterback Kentrick Thompson and the Viking offense stopped at their own 40-yard line, but drew a flag for illegal participation on the punt and gave Warren Central a fresh set of downs near midfield.

They cashed in 10 plays later with a 38-yard field goal from Josh Griffin to take the 3-0 lead.

With Madison Central’s starting quarterback Tate Collins on the sidelines in a knee brace, the Jaguars struggled to do anything against the quick Viking defense.

They started converted wideout Creek Robertson under center, and actually had some success early, driving from their own 20-yard line to the Warren Central 34 without completing a pass on their opening drive. But senior Matthew Huerkamp’s 51-yard field goal attempt came up just short, and the Jags never came close to putting points on the board again.

Madison Central’s final three possessions in the first half ended with a strip-sack fumble, a punt and an interception.

It didn’t get any easier in the second half, as Madison Central punted three times, turned it over on downs and threw another interception that set up Warren Central’s second field-goal from 22 yards out to extend the Vikings’ lead to 6-0.

Madison switched quarterbacks after the second interception, and actually had a chance to win the game late. The Jaguars got the ball back with just under one minute to go, pinned deep in their own territory with no timeouts. That’s when Warren Central senior Lawrence Madison burst through the line and sacked MC’s retreating backup quarterback Vic Sutton in the end zone for the safety that sealed the win.

“We are what we are,” Morgan said. “We kind of craft what we do around (our linebackers) because they really run to the ball well. We’re just trying to find a way to be successful and they’ve bought in to what we’re doing.”

Morgan might be right that they don’t have any heroes on defense, but that wasn’t the case Thursday night. Senior corner Tevin Bell recorded both interceptions on really athletic plays, and outside linebacker Jashun Thompson was all over the place, recording several stops behind the line and recovering the lone Jaguar fumble.

Bell, who was on Warren Central teams that lost to Madison Central in 2019, 2018 and twice in 2017, said it felt great to get that monkey off their backs.

“This is a good win,” Bell said. “But I feel like we can beat everybody. I feel like the team that we have is amazing. We’re so tight and close together, I just feel like I could go to war with anybody with these boys.”

The loss was brutal for Madison, which has now been shut out twice in its last four games. The rain poured the entire game, making it difficult for either team to throw the football, and the Viking defense won the battle at the line off scrimmage and shut down the run all night.

The Jaguar defense was magnificent in defeat. They held Warren Central to 161 yards of total offense.

The road doesn’t get any easier from here, either. The Jags host top-ranked Starkville next week before hitting the road to Batesville to take on South Panola.

Warren Central gets a week off before hosting Clinton on Oct. 23. A win in that game would clinch a playoff berth, but these Vikings have set their goals much higher.

“That was a good one, but we do it every week,” Bell said. “We hold every team we play to one or two touchdowns a week, so this one is just another one up there.”