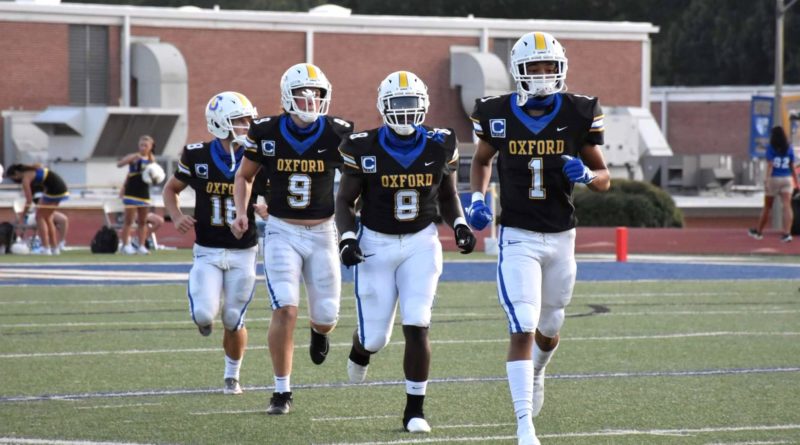 Oxford coach Chris Cutcliffe didn’t mince words about his disappointment after his team had to overcome a slow start and come from behind to beat Southaven last week.

Friday night’s 39-7 win over Lewisburg completely changed his tune after the Chargers (4-0) didn’t waste time on either side of the ball, jumping out to a 39-0 lead by halftime.

“We played better early in the game there is no doubt about it,” said Cutcliffe.

Oxford was also helped by a great performance by both their defense and special teams, which accounted for two blocked punts, including one that gave the Chargers the ball on the Patriots’ 5-yard line.

After a scoreless first couple of drives, Omar Howell opened the scoring for Oxford with a 3-yard touchdown run in the first quarter, and the Chargers added a two-point conversion to go up 8-0.

Oxford continued to run their two-quarterback system, rotating sophomore Trip Maxwell and junior Michael Harvey every series. They found success for most of the half, with both quarterbacks accounting for two touchdowns each.

The score does not tell the whole story for Lewisburg in this game. The Patriots (2-3) had a great opening drive which including a big run by Senior Blake Speed which put his team inside the Charger red zone. But the Patriots missed a field goal, and that proved to be their best shot at putting points on the board until late, then Jason Hoffman’s fourth-quarter touchdown run. Speed showed tremendous heart out there not given up at any point during the game no matter the score and he even intercepted an Oxford pass in the end zone on the opening drive of the second half.

Harvey said after the game that they were helped offensively by the fact that Lewisburg runs the same type of defense as we do so we understand the looks more than others.

“Our goal is basically to go fast and do what we do and make sure to not over contemplate things we just try to do what we do,” Harvey said, adding that he was glad to get his first career rushing touchdown because he has been waiting for that call to be made near the goal line.

The question going forward for Oxford after their first four games is the quarterback situation, which involves the sophomore Maxwell and the junior Harvey.

“We have played both guys all year and they have both played well consistently and we plan to continue playing both of them.” Cutcliffe said, pointing to the continuing unknowns of Covid as one of the reasons for keeping the two-quarterback system in play.

Oxford (4-0) will face another Desoto County team next week as they travel to Desoto Central. Lewisburg (2-3) will host Hernando as the Patriots are still searching for their first district win.