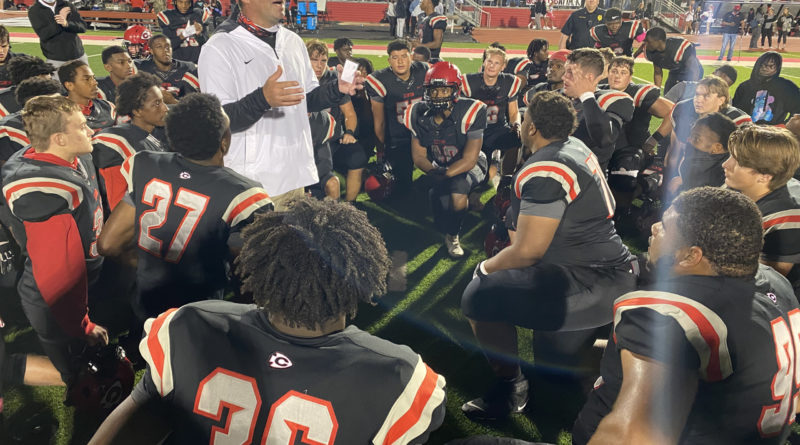 CLINTON – Clinton quarterback Caleb Miller couldn’t hide his excitement following his Arrows’ 24-21 win over No. 6 South Panola Friday night, even as he was getting medical attention for a nasty cut on his right hand.

On Friday night in Clinton, it certainly was.

Miller and the Arrows stole the momentum back from the Tigers with a suffocating drive to run out the final six minutes and hold on for an absolutely huge win on senior night in Clinton.

Boswell’s right to be proud, because Friday night’s win didn’t come easy. Victories over the Tigers never do, and the Arrows nearly learned that the hard way.

Despite trailing by a field goal, South Panola had all the momentum headed into the final 5 minutes of the fourth quarter here at Arrow Stadium.

After putting together long, back-to-back touchdown drives, the Tigers kicked it back to Clinton and needed one more defensive stop to have a chance to win.

Luckily, the Clinton offense saved its best tricks for the final act.

After a couple of runs that went nowhere to open the drive, Miller found Carsson De Young over the middle for a 12-yard gain on third-and-8 to give the Arrows a big first down.

After South Panola burned two timeouts to stop the clock following two more short runs, Miller used the hard-count to get South Panola to jump offsides on a 4th-and-2 near midfield.

Finally, facing another 4th-and-2 at the Tiger 26, Miller called his own number on a option read play and dove ahead for a five yard gain to seal the victory.

“We have not played a good game since our season opener,” Miller said. “And we felt like with how uncertain the season is and senior night being so early tonight, we thought ‘What do we have to lose?’ Everyone was counting us out because we haven’t played well, but we knew our potential was so much better than we had played, so we decided to come out here and shock the world.”

Miller was excellent. He tossed two touchdown passes in the first half, and used his legs to convert several key first downs in the second half that helped kill the clock. He completed eight of his 14 pass attempts for 113 yards and carried the ball 13 times for 73 yards.

Clinton opened the second half with a solid drive, and kicker Elliot Nixon’s 38-yard field goal put the Arrows ahead 17-6 with seven minutes to go in the third quarter.

It was a dog fight from that point on.

South Panola responded with a 13-yard touchdown drive – capped by a one-yard run from Landis McKinney – to cut the Clinton lead to 17-14.

Clinton came right back with a six-play, 53-yard touchdown drive that Montavious Warren capped with a 1-yard dive to put the Arrows ahead 24-17.

Not to be outdone, South Panola quarterback Anterrio Draper marched the Tigers 80 yards and found Cameron Wright on a jump ball in the corner of the end zone to trim the Clinton lead back to three, 24-21.

But the Tigers (3-2) couldn’t get that last stop when it mattered.

“We didn’t come out hot and we ended up playing catch-up all night,” South Panola coach Ricky Woods said. “Bottom line is that we didn’t play well tonight and you can’t do that against good teams like Clinton. We’ve got Germantown next week, and it we don’t play better, we won’t beat them either.”

For Clinton, Friday’s win couldn’t have come at a better time. The Arrows were coming off back-to-back losses to Northwest Rankin and Madison Central, and a loss would have made them 0-2 in Region 2 games. With Greenville and Murrah not playing, wins in the league are at a premium.

“It’s huge,” Boswell said. “Tonight is the only thing we know for sure right now. We don’t know anything about next week or the week after that, but we’ve got to get ready for a good Germantown team coming in here in two weeks and we’ve got to be ready for that one too.”