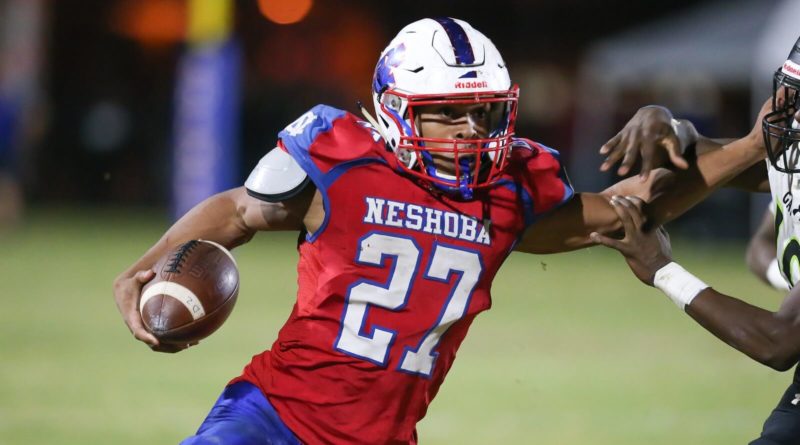 VICKSBURG – The Neshoba Central offense scored all of its points in the second half as the No. 4 ranked Rockets rolled up a 34-6 victory over the Vicksburg Gators on Friday night.

The game was played at Warren while Vicksburg’s stadium at City Park is undergoing a renovation.

Neshoba Central now stands at 5-0 overall and 2-0 in the District 2-5A standings. The Gators dropped to 1-5.

A tough Vicksburg defense and a penalty flag thrown every time Neshoba Central made a long gain kept the Rockets off the scoreboard in the first half.

The score stood at 0-0 when the second half opened but it didn’t stay that way for long,

Neshoba Central took the second half kickoff and started at their 44-yard line. On first down, Jarquez Hunter ran 38 yards to give the Rockets a first down on the Gators’ 18-yard line. On the next play, he carried it the rest of the way into the end zone for a touchdown. Hunter Baretta booted the extra point and the Rockets led 7-0 with 30 seconds gone in the third quarter.

Vicksburg went for it on fourth down and the Rocket defense held at their 45-yard line.

Nine plays later, Hunter scored again on a six-yard run. Bavetta’s kick was good and the Rockets led 14-0 and that’s how it stood until the fourth quarter.

Defensive lineman Maxton Woodward covered a fumble and returned it to the Vicksburg seven-yard line. Two plays later, quarterback Eli Anderson ran the ball into the end zone on a five-yard run. Bavetta’s kick was good and the Rockets led 21-0 with 10 minutes left in the game.

Vicksburg scored its only points when Lawrence Sullivan caught a 76-yard TD pass. The extra point try failed and the Gators trailed 21-6 with five minutes left.

The Rockets took the ensuing kickoff and drove 57 yards for a touchdown. Anderson scored on a four-yard run. The extra point try failed and the Rockets led 27-6 with 4:34 left.

Hunter tacked on a one-yard TD run late in the game to give him 91 career touchdowns.