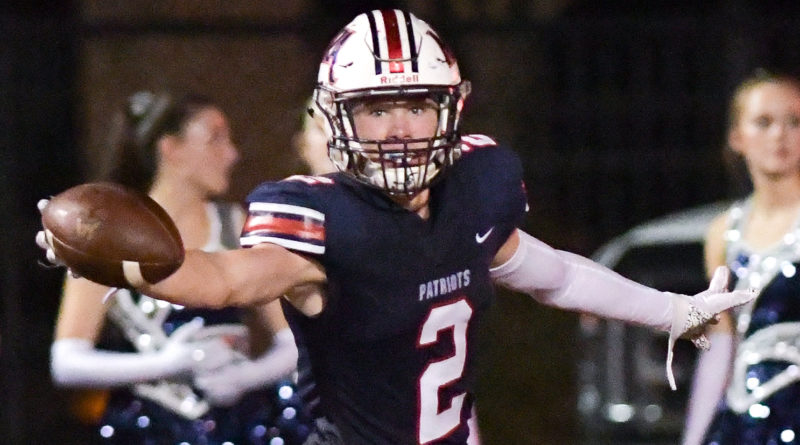 Herbert Davis set a few goals for developing a consistent football program at Madison-Ridgeland Academy when he took over in January of 2014.

He wanted to implement a junior high program that was consistent with the varsity program, and he wanted to expand off-season workouts to truly develop players. He also wanted to bring MRA its first state championship and then set the program up for consistent success year after year.

MRA is undefeated at 6-0 headed into a Week 7 matchup with a good Parklane Academy (3-2) team. They are explosive on offense and stingy on defense. They have already dispatched highly-touted Trinity Christian out of Cedar Hill, Texas, beat Jackson Academy, shut-out Philadelphia High and beat the reigning 4A champs from the MHSAA – Corinth – by 34 points on the road.

If Vegas had odds on high school football games, the Patriots would be two touchdown favorites over Parklane. If they had odds on winning an MAIS state championship, they’d be 2-to-1 favorites.

When Davis took over in January of 2014, MRA was a program that just couldn’t get over the hump.

The Patriots had experienced some success, but not when it counted in the playoffs. It had lost eight-straight to Jackson Prep, which was in the heat of a string of championship seasons that lasted nearly a decade under Ricky Black.

MRA was still considered “the other Patriots” in the Jackson Metro Area.

“That was the biggest hurdle when I first got here,” Davis said. “They had won so much and beaten so many good MRA teams over the years. They made us elevate to that level when I first came in the league, because nobody played harder than them and we knew we were going to have to match them at some point.”

They eventually did, but it wasn’t easy.

Davis implemented a speed-training and weight-lifting program for the junior high team. He went out and scheduled teams like St. Stanislaus, St. Martin and Briarcrest Christian (out of Tennessee) and took on games at Philadelphia and Taylorsville. They started getting better, but it’s not like the change came overnight.

As crushing as that loss was, MRA linebacker Stone Blanton, who was a freshman on that team, said the program had already turned the corner.

“That season taught me a lot about how to be a football player,” Blanton said. “We had great senior leadership from guys like John Cartwright, Sam Shufelt and Ridge Futral. They took me under their wing and taught me and the younger guys how to work hard and stay humble. I wouldn’t be the player I am now if it wasn’t for those guys.”

They started expecting to win, and then they did: In 2019, MRA finally put Prep away in the regular season and in the state championship, winning comfortably in both games.

Now, Davis – who is battling stage 5 kidney failure and awaiting a transplant – is closing in on achieving his lasting goal at MRA: turning that breakthrough season into a dynasty.

After pulling out a 27-26 win over Deion Sanders’ Trinity Christian team in the season opener, the Patriots have only given up four touchdowns and have beaten Copiah, Jackson Academy, Bayou, Philadelphia and Corinth by double digits.

Within a couple of years, MRA has gone from a program who scheduled games against big teams to get better to the team the big programs are trying to schedule to get better.

Todd Lowery, who led Corinth to a state title last season, said he’s never seen a team as disciplined as MRA in their 51-14 win over his Warriors (2-2) on Sept. 25.

“They are a team that does the little things right and thoroughly,” Lowery said. “And not just doing the little things, but doing it with great effort, everything they do. They didn’t just show up and play that way, that’s a coached thing. What I saw is an example of great coaching. On top of it, you’ve got the talent that they’ve got … shoot.”

There are still big games left on the slate. After Parklane this week, the Pats have two big home games against Hartfield Academy (5-1) and Jackson Prep (3-1) before wrapping up the regular season with a road game at Presbyterian Christian (5-1) and a home date with Oak Forest Academy (0-3).

Davis said winning a second-straight state title is definitely on his bucket list, and Blanton said that’s exactly what they aim to do.

“It wasn’t always like this, but we expect to win at this point,” Blanton said. “We have two goals: to go undefeated and win a state championship, and we won’t accept anything less than that.”