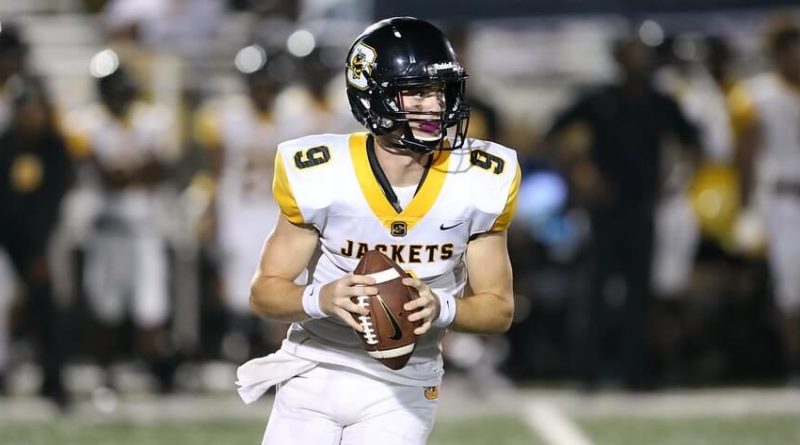 BATESVILLE — For nearly the entire first half, it looked like we were going to have a barn burner between No. 1 Starkville and No. 3 South Panola.

That was before Luke Altmyer and the Yellowjacket offense took over.

The Florida State commit led Starkville back from a slow start and an early deficit to rout the Tigers 38-20 Friday night.

“We got off to a slow start with a couple of fumbles early,” Altmyer said. “But this team is battle tested, we’ve faced adversity – we played West Point early on. I’m proud of our guys. We scored a bunch of points and our defense played outstanding.”

The win moved the top-ranked Yellowjackets to 4-0. South Panola fell to 3-1 with the loss.

The final score may look lopsided, but Starkville was anything but dominant in the first half.

South Panola went three-and-out on the opening kickoff, but Starkville’s usually sure-handed receiver Stacy Robinson couldn’t corral the punt, and Tiger junior Ethan Johnson fell on the live ball to set the Tigers up with a first down at the Starkville 32-yard line.

Altmyer fumbled it away on the next possession when the ball slipped from his hands on what appeared to be a pump fake near midfield. The groans started coming from the Starkville sideline, but coach Chris Jones urged everyone to stay calm.

“A lot of it was early-game jitters,” Jones said. “We’ve got a lot of young kids who are new to this situation. We dropped a couple of balls I thought we should have had, but again, we have to just stay calm, trust the process and move on to the next play.”

And that’s exactly what they did.

But South Panola responded with a touchdown of their own – a 31-yard pass from Draper to senior wideout Christoin Bobo – and tied the game at 14-14 with the two-point conversion on a run by D’mariun Parteet.

That’s when the momentum swung for good.

Altmyer led the Jackets 68 yards in 46 seconds and hit senior receiver Kobe Larkin from six yards out for his second touchdown with just nine seconds left in the first half.

It took them four plays to score on the opening possession of the second half – a 35-yard run from Altmyer – and the two-touchdown deficit was just too much for South Panola to overcome the rest of the way.

“We know what we’re about,” Altmyer said. “We’re a confident group. That was a huge drive there to end the half. We never shied away from our confidence. We’re winners here at Starkville.”

Altmyer completed 15 of his 26 pass attempts for 201 yards and three touchdowns, adding 83 yards on nine carries, with the one scoring run.

“I’m just glad he plays for my team,” Jones said. “I think he’s the best in the country and we’re really watching something special right now.”

Howard finished the night with nine carries for 99 yards and one score.

As solid a win as it was for the Jackets, it was just as rough on the Tigers.

Not only did they lose their first game of the season, they lost one of their best players – junior defensive end Jalen Kerby. Kerby suffered a broken leg in the process of making his third tackle of the night – he had already recovered a fumble as well – on a short dive by Altmyer in the first quarter.

“You hate it for him because he’s a great kid and a great player,” South Panola coach Ricky Woods said. “What’s really hard about it is that he came back from two big injuries last year to be ready for this season, but that’s the game.”