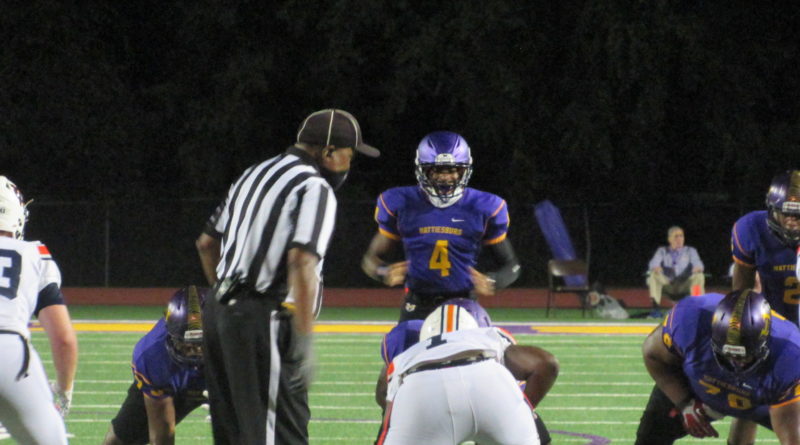 HATTIESBURG – The Hattiesburg Tigers scored three touchdowns in a two-minute span just before halftime, and that was enough to get past Wayne County, 20-10, here Friday night at D.I. Patrick Stadium.

It was the opening Region 4-5A game for both teams, and Tiger head coach Tony Vance couldn’t hide his excitement after the game.

“We had  tremendous effort  tonight against a really good football team,” Vance said. The Tigers (3-1) trailed the War Eagles, 3-0, with a little over six minutes to play in the opening half when Jaquez Andrews scored on a 2-yard run to give the Tigers a lead that they never gave back.

The touchdown capped a nine-play drive that was jumpstarted by a 30-yard punt return by Joshua Jones that put the Tigers in business at the War Eagles 41-yard line. The point-after kick failed, but Hattiesburg was up 6-3 at the 6:04 mark of the second quarter. The big play in the drive was a fourth down completion from Tiger quarterback Jordan Willis to Jones that was good for 13 yards.

Following the score, the Tigers recovered a short kickoff at the War Eagles 41-yard line. Five plays later, Andrews scored on a 14-yard run to give the home team a 12-3 lead with 5:03 to play in the half. The key play in the drive was a facemask penalty against the War Eagles on a third down play.

Tigers defensive back Makel Jones intercepted a War Eagle pass on the first play after the kickoff to set up the Tigers at their own 43-yard line. On the first play, Willis hit Tabais Hinton on a 57-yard pass to increase the lead to 18-3 with 4:11 to play in the opening half.

Joshua Jones came up with an interception and returned 45-yards on the second play after the kickoff as Hattiesburg set up shop at the War Eagles 49. Six plays later the Tigers moved to the shadow of the Wayne County goal line but failed to score on a fourth down pass play inside the 5-yard line on the final play of the half.

“I thought Jordan (Willis) made plays when he had to tonight. I was very proud of his play,” stated Vance. Willis hit on three fourth down passes on the night to keep scoring drives alive.  Willis threw for 140 yards.

Wayne County, who in the first period took advantage of a Chayce Daniels fumble recovery, turned the Tigers’ turnover into a 29-yard field goal by Nathan “Gator” Busby at the 5:04 mark.

The drive started at the Hattiesburg 39-yard line as the War Eagles moved to the Tigers’ 12-yard line in eight plays. Wayne County‘s only touchdown came with 9:22 to play in the game when they drove 60 yards in seven plays to score on Kelnevius Walley‘s five-yard run. Walley ran the ball six times in the drive, but the key play was a third-down pass from backup quarterback Cam Holifield to wide receiver Joseph Abney for 14 yards.

The Tigers added a safety with 1:48 to play as they  pinned War Eagles back inside their own 1-yard line. The Tigers defense held Wayne County to 90 yards rushing and only allowed 50 yards passing.

“I believe our non-region schedule has better prepared us for tough games like tonight,“ added Vance.

“We struggled tonight,” Gandy said. “It was an emotional game for our players, and I really don’t think we were mentally into it. We did have some key injuries, but in the end, we did not play well enough to win.”

Hattiesburg will travel to Pascagoula next week, while Wayne County (1-3) heads down I-59 to Pearl River Central.