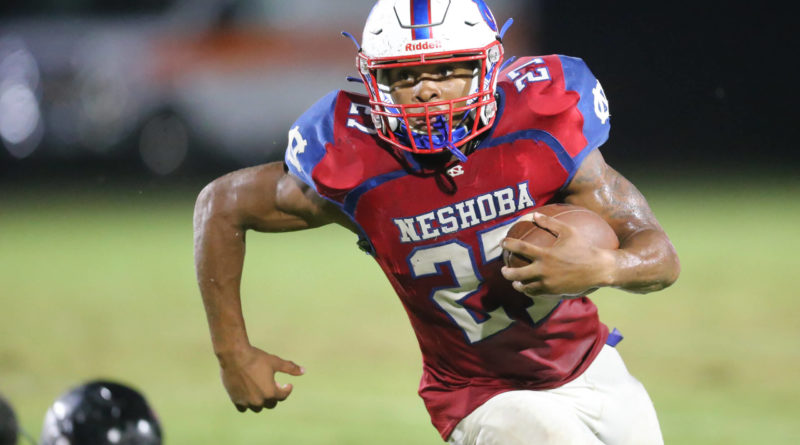 From Neshoba Central running back Jarquez Hunter to Oxford linebacker Tristan Shorter, there were several standout performances across the state of Mississippi on Friday, Sept. 25.

Altmyer threw for three touchdowns and ran for another to lead No. 1 Starkville to a 38-20 win over No. 3 South Panola. Altmyer completed 15 of his 26 pass attempts for 201 yards and three touchdowns, and added 83 yards and a TD on nine carries.

Shorter had two interceptions, including a pick-six, to lead Oxford to a 31-28 come-from-behind win over Southaven.

Kabe Barnett threw 5 touchdown passes in the first three quarters as Oak Grove cruised to a 59-24 win over George County.

Jack Tannehill kicked two field goals, including a 37-yard boot with 3:47 left to lift Oxford to a huge 31-28 comeback victory over Southaven. The Chargers trailed 28-8 midway through the third quarter before rallying. Oxford has won 16 straight games dating back to last year.

Parnell had a big game on the ground in Pascagoula’s 38-7 win over Pearl River Central, rushing 16 times for 200 yards and a touchdown. He also threw for one touchdown.

Justin Walley rushed for three touchdowns in D’Iberville’s dominant 35-0 victory over Biloxi. Walley finished with 84 yards on seven carries, scoring on runs of 14, 15, and 22 yards — his first and third scores coming on fourth down. He added four catches for 39 yards, converting one fourth down.

Taylen Smith’s pick-six proved to be the difference as Warren Central’s defense held Germantown just three points in the second half in a 23-10 victory. After Germantown’s Monterrius Walker recovered a Warren Central fumble on the Mavericks 12-yard line, Smith batted a Colton Gardner pass up the air, came down with the interception and ran seven yards to the end zone to put the Vikings up 21-10 with 9:32 left in the fourth quarter.

Lee led Moss Point to a wild 56-50 win over Stone High, completing 25 of 32 passes for 432 yards and five touchdowns. He also rushed for two TDs.

Deion Smith had three catches for 83 yards and two touchdowns and one carry for 34 yards in Jackson Academy’s 41-0 victory over Pelahatchie.

Howard had nine carries for 99 yards and a touchdown – a game-changing 73-yard TD run — in Starkville’s 38-20 win over South Panola.

Bray Hubbard ran for two touchdowns and threw for another to lead Ocean Springs to a 27-10 win over Hancock. Hubbard finished 10-of-14 passing for 185 yards, and he rushed 14 times for 65 yards.

Swann carried the ball 16 times for 122 yards and three touchdowns in Poplarville’s 27-7 win over St. Stanislaus.