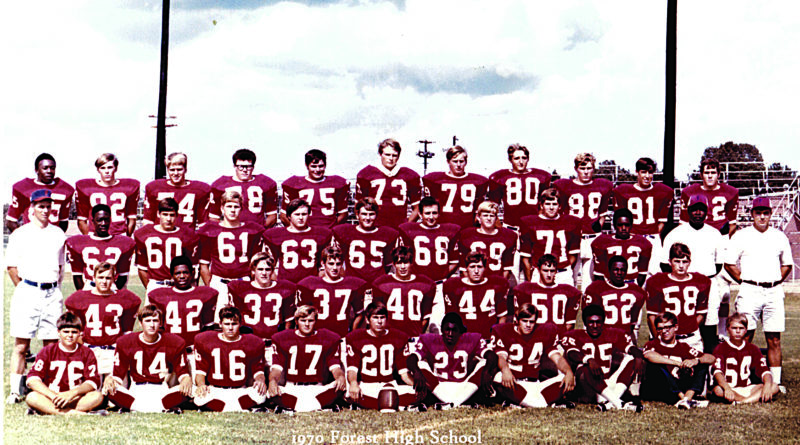 Members of the 1970 Forest Bearcats recently traveled from across the United States to be reunited as a team and share memories of an unforgettable championship season a half century ago.

Despite many challenges, the 1970 Forest High School football team captured the Little Dixie Conference championship with a perfect 11-0 record.

Assistant Gary Risher was named the new head coach. He selected Billy Ray Dill as his first assistant, and when it was announced the Forest schools would be fully integrated, Risher approached the late James C. “Bo” Clark, head coach of the “Black Bearcats” at E. T. Hawkins School, to join his staff.

These Bearcats depended on a strong rushing attack and a stout defense throughout the season. Forest won the North Little Dixie Conference title by rallying to defeat undefeated Morton 10-7 at Panther field. Quarterback Mike Massey’s 43-yard field goal – his only field goal attempt the entire season – proved to be the winning margin.

The day of the Little Dixie Conference championship game – held at L.O. Atkins Field in Forest – Risher’s infant son Robin became seriously ill and was rushed to a Jackson hospital, where he was diagnosed with a form of meningitis. That meant Risher had to be quarantined and could not be with his team for the championship game.

A special phone line was set up so Risher could communicate with his assistants throughout the game.

The result? Forest broke away from a close contest to score twice in the final period for a 22-10 victory and claimed a second-straight LDC title.

Members of that special Forest team gathered together for the first time in five decades to be honored during halftime of the Forest/Florence game Friday, Sept. 18 at Atkins Field.

Joining team members for the special ceremony were family members of deceased players, cheerleaders, as well as representatives of the 1970-71 All-Superior Band, school administrators and faculty members from that championship season.

The team member who traveled the farthest to participate in the celebration was Edmond Harvey, who drove from Las Vegas and picked up teammate Lee Evans in Shreveport.

Why did he travel so far to attend the celebration?

“This was a team I loved and I wanted to pay my respects to everyone, “ said Harvey, who was a junior offensive end on the team. “We worked hard … very hard … and it was tough during those two-a-day workouts in August. I just looked at the practice field and got nervous, again. But those tough workouts were worth it and resulted in a championship season.”

Evans, also a junior on the team who played offensive end and defensive back, said what he remembers most about the championship season was that “we were a team and played well together. Everyone got along and we had great coaches.”

Mike Massey, who lives in Ridgeland, said attending the 50th anniversary of a special season is just that: special.

“It means a lot to me,” he said, “You don’t get many opportunities like this. It’s huge … it’s big! And I still remember everything about that year. It was a great season … a great time in my life.”

Dea McCrory Irby, one of the Bearcat cheerleaders that season, flew from Durham, N.C., just to see longtime friends and participate with other cheerleaders in the halftime ceremony. They performed “Two Bits” prior to the Forest Band’s playing of the school’s fight song, “Anchors Aweigh.”

“Why did I come home for this special event?” she asked. “It’s simple … this is home. This is where I am from. These are my roots. The people who helped make who I am live here. They are the influences of my life.”

She added, “And of course, being able to cheer on the Bearcats one more time is very special to me. Leading the team onto the field with the other cheerleaders will be another special highlight of my life. It is very comforting and very welcoming … to be home again.”

Lee Dukes, who lives in Ridgeland, said seeing longtime friends and reminiscing about special times at Forest High is the reason he chose to attend the night’s activities. Dukes, a senior wide receiver, also served as student body association president. He represented the team in providing remarks during the ceremony, and recognized deceased team members – Billy Thompson, Dave Gibson, J. W. Clark, Elbon Johnston, Raymond Robinson, Tug Ledford and Howard Chambers, and asked for a moment of silence in their honor.

Twins Ricky and Randy Dilley were juniors on the championship squad. Ricky, who lives in Southaven, played fullback and Randy, a defensive back, resides in Forest.

“I am here to celebrate our championship season that no one predicted we would have,” said Ricky. “We were not expected to win but about half the games we did. We did not have a whole lot of talent but we were accustomed to winning after the 1969 team’s success and did not know how to quit.”

Randy added, “It’s great to see old buddies again and just reminisce about the fun times we had. It’s been very cool. I am just proud to be a part of this team and celebration.”

Phyllis Reynolds Dilley, Ricky’s wife, was a senior member of the All-Superior Forest High School Band during the 1970-71 school year. A flute player who later switched to cymbals at the request of band director Doug Harvel, said being invited with other band members to attend the special ceremony is wonderful. “We appreciate the invitation and look forward to being with our championship team during the halftime ceremony.”

Willie Bowie was a junior wide receiver and return specialist on the championship squad. He continues to reside in Forest.

“I feel the same way I did 50 years ago,” Willie said. “I still have wonderful memories. We pulled together to win a championship and I am glad we can still pull together to celebrate! The highlight of that year for me was simply having the opportunity to get out there and play football. We played as a team and everybody had the same goal.”

Wanda “Tutti” Calhoun Carter drove from Boynton Beach, Fla., to join other cheerleaders participating in the special celebration. She also came to see her brother Jackie Calhoun being honored with other members of the 1970 team.

Bob Smiley was an offensive guard on the 1970 squad. He lives in Laurel. He provided his thoughts on the championship season.

“Being here means a lot to me. … Our team did not have a lot of great stars but we had a lot of unity, a lot of camaraderie and we sure worked hard in practice! We had great coaches that we respected, and they respected us a players. It was a good combination. We worked well together.”

Martha Marler Eppstein was a senior cheerleader for the 1970 Bearcats. She lives in Forest.

“This (event) is very special to me and I look forward to walking onto the field with the Bearcats and cheering with the other cheerleaders at halftime. We had a special team in 1970 and our coaches were absolutely amazing to put the first integrated team together and win a championship.”

Rodney Russell, who continues to live in the Forest area, was a senior lineman on the championship squad. His response is similar to other team members.

“It’s just great to be back with my brothers that I went to battle with,” Russell said. “We were not expected to do a lot our senior year because of the success of the 1969 team and the many players that graduated. We did not have a lot of superstars on our team but we all depended on each other and trusted each other to get the job done. We did not think anybody could beat us. Not that we were cocky or that good, we just expected to win.”