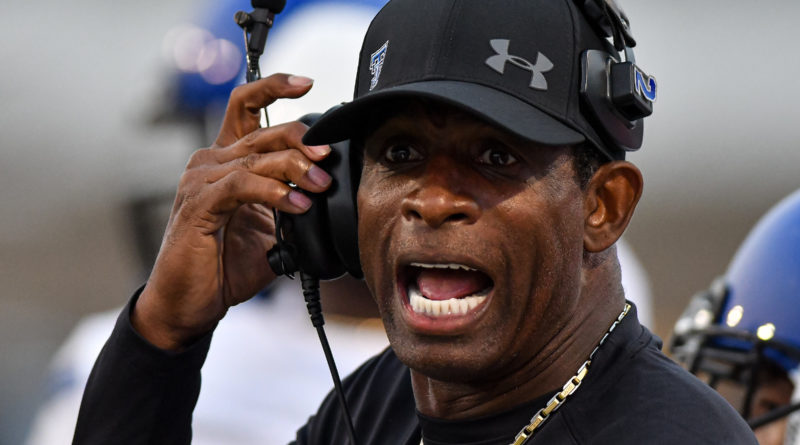 Newly minted Jackson State football coach Deion Sanders has made no secret he wants to overhaul the current Tiger roster, and that means he’s got one big sell to offer potential recruits: playing time.

Sanders, 53, addressed recruiting Mississippi athletes at his introductory press conference Tuesday, just 24 hours after he was introduced as Jackson State’s next coach.

Wearing a JSU blue blazer, and sporting his trademark smile, Sanders said he intends to land some of the best players in the country, but especially wants to bring in talent from the Magnolia State.

“There’s plenty of talent right here in Mississippi,” Sanders said. “The trick is keeping that talent in the state.”

Sanders started his recruiting blitz Monday night, when he sent out offers to some of the top prospects in the country. Among those players, according to 247sports.com, is Louisiana’s top prospect – five-star Houma Terrebonne blue-chipper Maason Smith. He also offered the nation’s No. 1 juco cornerback De’Jahn Warren (currently committed to Georgia) and the No. 2 juco linebacker, former Scott Central star and current Mississippi State commit Navonteque Strong.

Sanders is banking on the college football reverberations from the Black Lives Matter movement and the summer, in which we’ve seen some elite recruits listing Historically Black Colleges and Universities among their top choices.

Despite a history that includes four NFL Hall of Famers, Jackson State, like its fellow HBCUs, has not gone toe to toe with the big boys in the Southeastern Conference in terms of recruiting in more than two decades.

But that’s started to change recently.

Warren told one reporter last night Jackson State was “100 percent” in the running to be his college destination.

According to 247sports.com, the No. 1 high school football prospect for 2021 has Howard University – an HBCU in Washington, D.C. – in his top-5 list. It remains to be seen whether Mississippi’s top talent will be as easy to sway.

Whatever happens, it’s certainly an exciting time to be a Mississippi recruit. High school prospects might get an in-home visit from Ole Miss’ Lane Kiffin, Mississippi State’s Mike Leach and Jackson State’s Deion Sanders in the same week.

And it’s only getting wilder: reports from multiple outlets Tuesday morning say Sanders’ staff at Jackson State will include Hall of Famer Terrell Owens as wide receivers coach and Hall of Famer Warren Sapp as defensive line coach.

The Tigers are coming off a 4-8 season in 2019 after finishing 3-4 in SWAC play. JSU kicks off its spring season at home on Feb. 19 against Division II Edward Waters.