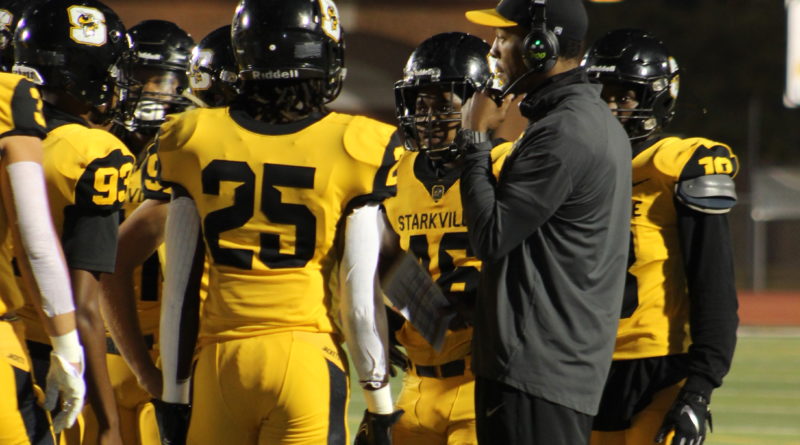 But this game was closer than the final score would indicate.

Trailing 14-0 at halftime, the Wildcats did not go away quietly and were driving to cut the deficit to one score before Starkville’s Braylon Burnside ended any hopes of a Meridian rally with a red zone interception.

Starkville was led by the quarterback-receiver combination of Luke Altmyer and Stacy Robinson. The duo connected on three of Altmyer’s four passing touchdowns on the night.

Jordan Mitchell provided the clinching touchdown as he got the start at running back in place of the injured Amariyon Howard. Mitchell also sparked the Starkville offense with a 61-yard run early in the second half.

The Yellow Jackets defense played well despite being on the field for most of the game due to the running attack shown by the Wildcats. Starkville’s secondary also were on their game with three interceptions, including one on the opening possession of the game that set up their offense with great field position.

But Robinson stole the show with his superior play. The senior wideout has proven to be an early season favorite target for Altymer.

“I know coach Jones and Luke are going to put me in the best position out there to make plays,” said Robinson.

The Wildcats were helped by the play of freshman Daniel Hill who showed he will be a force to be reckon with in the coming years. Hill played multiple positions on the offensive side of the ball and got the ball in a variety of ways. The Wildcats also got great contributions from Junior duo Jonathan Vaughn and Niqundre Smith.

After the game, Starkville coach Chris Jones said his team is still trying to find its footing in a young season.

“We are still just trying to get better,” Jones said. “We didn’t have a spring or a summer, and we are trying to find our identity, create our identity and made sure that we put an emphasis on running the ball.”

“We need to work on the little things: ball security, missing tackles, and dropping balls,” Jones said. “Just the little things that you may get out in the spring or the summer. Focus must be on execution and getting better on Monday, Tuesday, Wednesday and Thursday.”