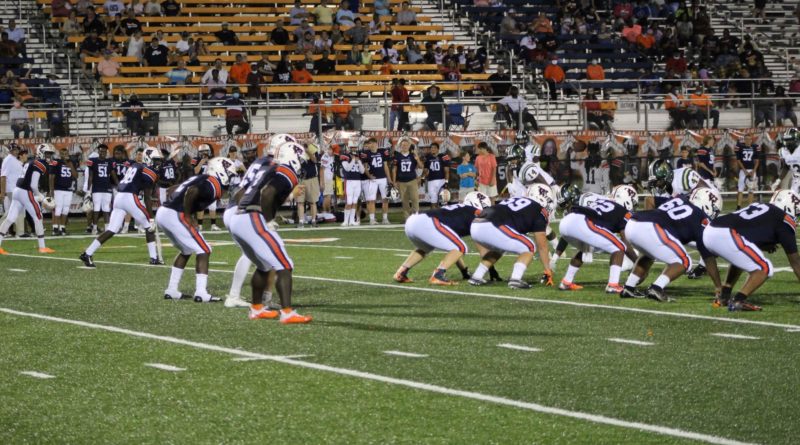 Laurel (0-3) took advantage of two War Eagles first-half fumbles and then hit a 93-yard pass play to jump out to a 21-3 lead early in the second quarter. The War Eagles were able to score midway through the second quarter and then added two short touchdown runs by quarterback Sebastian Chafin in the third period to record their first win of the season and first win for their first-year head coach Kevin Gandy.

Wayne County did have some anxious moments in the final seconds of the game as Laurel missed a 39-yard field goal attempt. The Tornadoes had stopped Wayne County on a fourth down play minutes earlier, and then LHS quarterback Dexter Scott hit his “Dandy Dozen” receiver Kanarius Johnson on a 45-yard pass play, setting Laurel up at the War Eagles’ 25-yard line. Four plays later, the field goal attempt was wide left, giving the War Eagles the win.

“It feels great to get that first win, but I am prouder of these players. They were resilient and played hard for 48 minutes,” stated Gandy.

The War Eagles had battled two Top 10 teams in D’Iberville and West Jones and because of their own self-inflicted wounds entered this game 0-2. Turnovers were costly in both losses for the War Eagles. On this night, their game began much like the pervious two games as they lost two fumbles and one interception in the opening half when Laurel took advantage of two of those miscues to bolt out to the 18-point lead only 16 minutes into the game.

Kiron Benjamin put Laurel up 7-0 with a 17-yard touchdown run after WC had fumbled the ball deep in their own territory. Wayne County immediately responded as they drove from their own 20-yard line to the Laurel 8-yard line before settling for a 25-yard field goal by Nathan Busby with 44 seconds to play in the opening quarter.

Four minutes later, Tornadoes defensive back Dmark Smith picked up a loose War Eagle football and ran 48 yards to increase the LHS lead to 14-3 at the 8:44 mark of the second period.

Laurel was backed up in the shadow of their goal post at their own 6-yard line on their next offensive series. Two plays later, Dexter Scott hit Kanarius Johnson on a 93-yard bomb that upped the home team’s lead to 21-3 with 6:08 to play in the half.

Wayne County returned the favor on the first play after the kickoff as Chafin hit War Eagles running back Shadamien Williamson on a 65-yard pass play to close the gap to 21-10 with less than six minutes to play in the half.

Later in the period, Chafin ran 2 yards for a score after Wayne County took over at the Laurel 20-yard line when a Tornado punt attempt went astray.

“I told the kids at halftime that we can’t keep turning the ball over so let’s go out and play a perfect game, and if we do that we will win this game,” said Gandy.