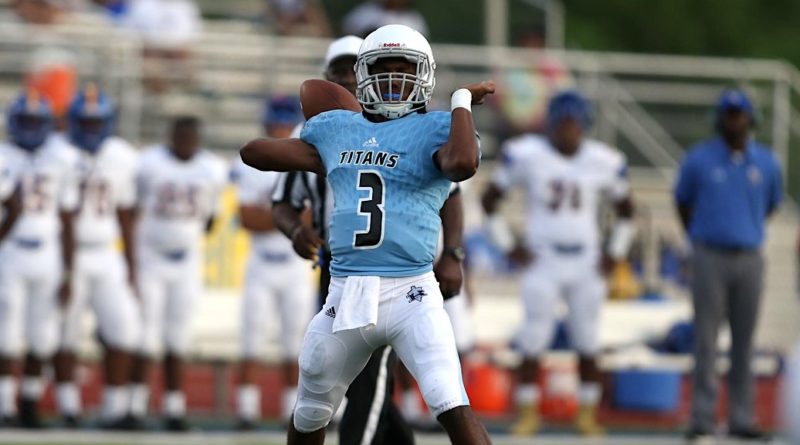 Madison County is experiencing a football renaissance of sorts. Germantown and Madison Central are both off to great starts, but there’s another team from the area that you just can’t sleep on these days.

After opening the season with back-to-back wins over 6A opponents, the Ridgeland Titans have emerged as a serious contender in Region 2.

The offense is clicking behind quarterback Zy McDonald, who has completed 33 of 54 passes (61 percent) for 593 yards and eight touchdowns without throwing an interception.

Receivers like Louisiana-Monroe commit Richard Mays (11 receptions, 294 yards) and sophomore Ayden Williams (11 receptions, 200 yards) have emerged as big-play targets, but guys like Antwoine Brown are contributing in the slot as well.

It’s all paced by junior tailback Donovan Ball, who has averaged 6.2 yards per carry and 118.5 yards per game against the 6A defenses of Pearl and Terry.

“We’ve really raised our level of focus on the offensive side of the ball,” McDonald said. “We had a lot of players coming back that played a lot last year, but we seem to be more determined to win games and dominate, because we know we can do it.”

That confidence comes with success, which first-year Ridgeland coach Sam Williams brought to the table when he was hired to helm the program after three years at Pelahatchie.

“I think any time you take over a program, there’s no guarantee of the level of talent there,” Sam Williams said. “One great player or two great players doesn’t make a football team. But this program won eight games last season and had a chance to get a couple more, so we knew it was possible to win here.”

Williams said he had already identified some leaders – like McDonald, who is being recruited by UL-Lafayette – but said he’s been inspired by some of the other kids on the team that have stepped up.

While the offense was already potent, the improvement on the defensive side of the ball is the main reason for the renewed optimism.

The Titans gave up 62 points to Pearl in Week 3 last season. In this year’s season opener against those same Pirates, they gave up just 14.

“I think most of the credit has to go to the coaches for doing a good job of getting us prepared,” Chandler Williams said. “We have worked harder on getting locked in for games, but we’ve gotten better at linebacker and we’re really doing a good job against the run, which was kind of our weakness on defense last year.”

There’s reason to believe the recent success isn’t just a flash in the pan, either. Sam Williams points to a strong sophomore and freshman class as evidence that the program could remain a real contender for at least the next couple of years. They face an uphill battle taking down Neshoba Central (2-0) for the region crown this season, but you can bet they’ve got that Oct. 23 road game circled on the schedule.

But first things first – the Titans face another huge challenge this Friday night, when they travel back to Rankin County to take on another 6A opponent – Northwest Rankin. The Cougars (1-1) are coming off a big win over Clinton and present the biggest challenge to the Ridgeland defense to date.

Sam Williams, who previously served as an assistant coach at Northwest for four years, said he knows how tough an out the Cougars are likely to be.

“(NWR coach) Toby Collums is one of my best friends,” he said. “I know his team is going to be well-coached and they’ve got some explosive players on both sides of the ball. In a lot of ways, they are a lot like us. It will likely come down to who executes.”