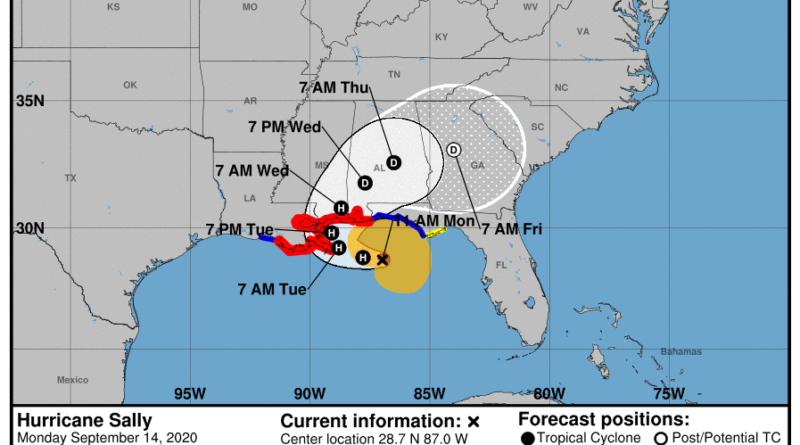 The storm currently bearing down on the Mississippi Gulf Coast known as Sally was upgraded to a Category 1 Hurricane shortly after noon on Monday.

The storm has stalled over the Gulf of Mexico, and is currently moving north-northwest at around 7 miles per hour. It is currently expected to make landfall in the early hours of Tuesday morning.

Mississippi Governor Tate Reeves on Monday issued a state of emergency, and urged all Mississippi residents south of Jackson, and particularly south of Hattiesburg, to prepare for the worst.

“While it has ticked to the east and slowed overnight, it is still anticipated that we will bear the brunt of this storm,” Reeves said. “If you are south of Jackson – and particularly if you are south of Hattiesburg – now is the time to prepare.”

Schools are currently monitoring the storm and making decisions on how to proceed, but many have made decisions.

In most cases, football practice has also been canceled, which means games originally scheduled for Friday night could be postponed to later in the weekend as the situation changes.

Check back here for updates regarding cancelations and postponements.

Update (4:45 p.m. Monday): Governor Tate Reeves tweeted this afternoon that South Mississippi residents in low-lying areas need to make plans to evacuate immediately. The Associated Press is reporting that the storm has strengthened to a Category 2 storm, with heavy rainfall and sustained winds in excess of 100 miles per hour.

Update (6:35 p.m. Monday): Reports late Monday afternoon had the storm shifting east, with the the Mobile (Ala.) area now projected to take the brunt of the storm. A strong surge and flash flooding are still possible on the Mississippi Gulf Coast. The Mississippi Department of Transportation Monday afternoon advised coastal residents to finalize plans tonight.

Update (10 a.m. Tuesday): Forecasters say the storm has weakened overnight. It now has sustained winds of 85 miles-per-hour, but could bring rains from 10 to 20 inches along the coastal counties, with some areas experiencing as much as 30 inches of rain.

The projected storm surge has been reduced from nine feet to seven feet.

Update (6:30 p.m. Tuesday): With the storm moving further to the east and weakening it now appears that flooding will not be significant enough to close schools through the end of the week. As of Tuesday evening, all the schools contacted by Scorebook Live plan to play at their regularly scheduled time on Friday night. We will have further updates if that changes.