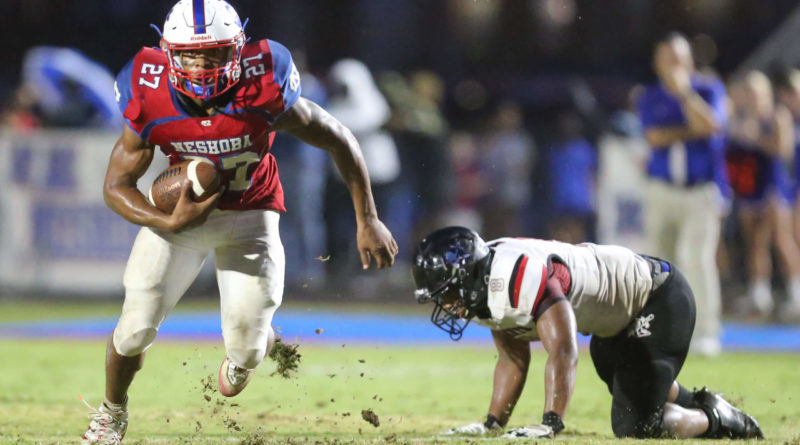 Here are the top performances that caught our attention across the state on Friday, Sept. 11. Did we miss someone? Tag us on Twitter or Instagram @sblivems and let us know. We’ll update the post with more top performances as they are submitted by readers.

Tate Collins did just enough with his arm, completing 11 of 18 passes for 80 yards with two touchdowns, but he put on a show with his legs, rushing 12 times for 141 yards and two scores in Madison Central’s 35-7 win over Pearl. — GAME STORY

Hunter had 17 carries for 113 yards and three touchdowns in Neshoba Central’s 42-14 win over West Lauderdale. But it was his play on defense that turned the game. On West Lauderdale’s opening drive of the third quarter Hunter scooped up a fumble and scampered 47 yards to the house to give the Rockets a 21-7 lead. — GAME STORY + PHOTOS

Barnett was 12 of 18 for 221 yards and three touchdown passes, plus he ran for another score, in Oak Grove’s 66-27 win over Hattiesburg. — GAME STORY

McNeal had a game for the ages in Choctaw County’s 50-18 victory over East Webster. He hauled in three receiving touchdowns on offense, then scored two touchdowns on defense on pick sixes. He finished the game with four interceptions.

Mays had six receptions for 144 yards and a touchdown in Ridgeland’s 48-18 win over Terry.

Shanklin scored on touchdown runs of 29, 26 and 10 yards to lead Noxubee County to a 33-13 victory over Philadelphia. — GAME STORY

Bilbo rushed 25 times for 188 yards and four touchdowns and converted a two-point try in Vancleave’s 27-7 win over Long Beach.

Moore was electric on Friday night, hauling in three touchdown passes in the first quarter of Harrison Central’s 46-7 win over Pascagoula. Moore finished with 155 yards receiving.

Tita-Nwa had an outstanding two-way game in DeSoto Central’s 27-21 win over Pontotoc. He had five receptions for 117 yards on offense while also recording seven tackles, two pass breakups and an interception on defense.

Keyes accounted for six touchdowns — three passing and three rushing — to lead Taylorsville to a wild 56-42 come-from-behind victory over Seminary.

Sanders had 27 carries for 239 yds and four touchdowns in a 41-33 win over Tupelo Christian Prep.

Robinson had 12 carries for 202 yards and three touchdowns in Germantown’s 45-12 win over Tylertown.

Miller had 18 carries for 189 yards and two touchdowns in Kemper County’s 46-20 win over Raymond.

Perkins had two touchdown runs and also scored on a 31-yard fumble recovery return to lead Raleigh to a 24-6 victory over Bay Springs.

Jones rushed for three touchdowns in the first half as Jackson Prep built a big lead and cruised to a 42-8 victory over Adams County Christian.

McCully had 14 carries for 130 yards and two touchdowns in Nanih Waiya’s 41-33 victory over Tupelo Christian Prep.

Betts rushed 17 times for 103 yards and a touchdown and added two receptions for 23 yards in Corinth’s 24-23 loss to Olive Branch. He also had seven tackles on defense.

Hubbard rushed 10 times for 279 yards and 3 touchdowns and added 9 tackles and a sack on defense in Mount Olive’s 44-34 loss to Clarkdale.

Surrette was 6 for 6 on PATs and had a 30 yard field goal. He also had a touchback on the only kickoff that he was allowed to kick deep in Water Valley’s 45-0 win over Bruce.

Harris had four catches for 119 yards and two touchdowns in Petal’s 38-12 win over Laurel. He also had two interceptions and a forced fumble on defense.

DeAndre Smith threw for 295 yards and four touchdowns and added a rushing touchdown to lead Greenville Christian to a 50-7 victory over St. Joseph.