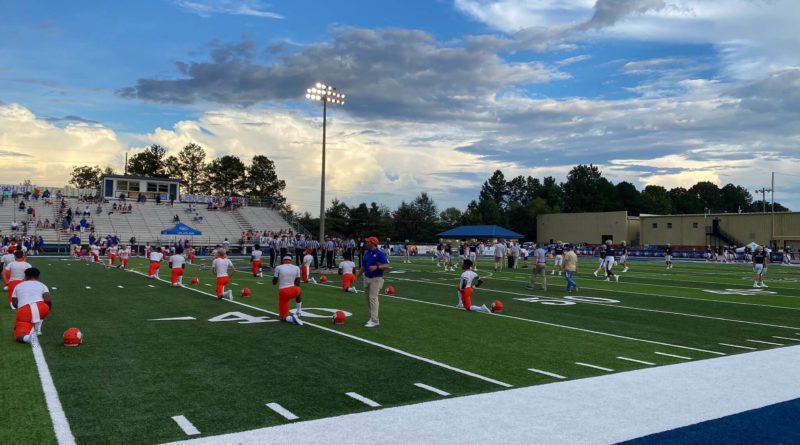 PEARL – Madison Central has been a program on the cusp of a championship since 2014, but 2020 is starting look like it could be the year of the Jaguar.

After hanging on for a closer-than-expected win over Northwest Rankin in Week 1, the Jags completely dismantled Pearl Friday night, sinking the Pirates 35-7 here at Ray Rogers Stadium.

The Jaguar defense, led by twins Joseph and Josiah Perryman, was as-advertised. They held the Pearl offense to 138 yards of total offense and forced one turnover on a tipped-pass interception from corner B.J. Washington.

“We had a bust or two on our kickoff team… but our defense played really well,” Madison Central coach Anthony Hart said. “That’s an experienced group of guys, and coming in (to the season) we felt good about what we can do on that side of the ball. But we can continue to get better with each week, and that’s what we’re going to try to do.”

The offense is still a work in progress, but it’s starting to gain an identity. That starts at quarterback with Tate Collins, the gangly 6-foot-3 junior who earned the starting job in fall camp and hasn’t looked back.

After rushing for two scores in that first game against Northwest Rankin, Collins added two more Friday and tossed a couple of first-half touchdown passes – one to receiver Creek Robinson and the other to the Jags’ big tight end Blake Gunter.

Collins did just enough with his arm, completing 11 of 18 passes for 80 yards with the two touchdowns, but he put on a show with his legs, rushing 12 times for 141 yards and two scores.

The first-year starter’s second-consecutive strong performance has apparently earned him his teammates’ confidence.

“Tate’s done an amazing job being a leader for us,” Gunter said. “He’s getting smarter with every game, his reads are getting a lot better and I think he’s just going to keep improving as we move through the season.”

Madison Central running back Duke Arnold had the other Jaguar touchdown – a 24-yard run in the second quarter. He finished the night with eight carries for 49 yards.

Pearl’s big 240-pound running back Jamari Thompson was the lone bright spot on offense, rushing 21 times for 99 yards before leaving the game late in the fourth quarter with what looked like a concussion following a big hit.

But outside of Johnson’s kick return, the Pirates didn’t get any big plays out of their most explosive players. The Pirates biggest play of the night – a 57-yard run from sophomore tailback Jaquavien Shoto, was called back for holding.

“They have a good ball team,” first-year Pearl coach Justin Hunter said. “I think the played harder than we did in the first half, and their players made plays… we’ve got nowhere to go but up, and I fully expect us to be a lot better next week.”

While Pearl heads back to the drawing board, Madison Central will start preparing for another road trip to Rankin County – this one to Brandon to take on the winless Bulldogs (0-2).

If the Jags keep improving the way Hart thinks they can, they’re going to be tough to beat.

“I feel like this is our year,” Joseph Perryman said. “I know last year we lost in the first round, and that was disappointing, but I feel like this year is the team that can go to the state championship.”