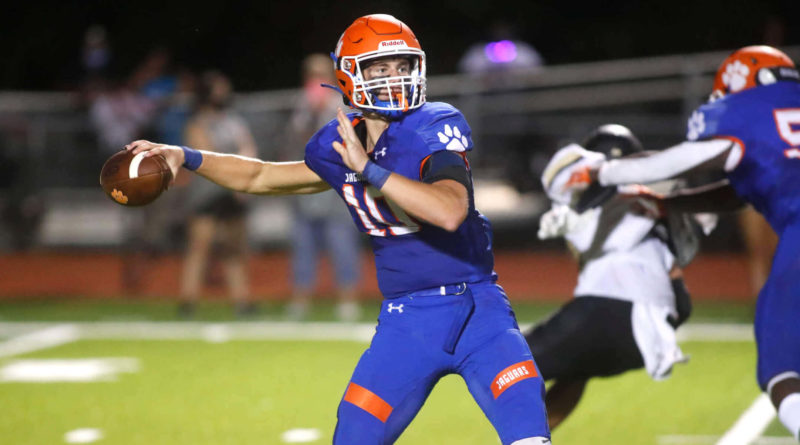 Here are the top performances that caught our attention across the state on Friday, Sept. 4. Tag us on Twitter or Instagram @sblivems if we missed anyone. We’ll update the post with more top performances as they are submitted by readers.

Mustangs quarterback Alan Follis was 13 of 19 for 253 yards and four TD passes to lead West Jones to a 35-6 win over Raleigh.

Jarquez Hunter, arguably the state’s best running back, carried the ball 32 times for 179 yards and two TDs to lead the Rockets to a season-opening win.  — GAME STORY

South Panola QB Anterrio Draper scored the game-winning TD with 7:52 to play and the Tigers held their breath as Hernando drove to the South Panola 25-yard line and missed a 42-yard field goal with 1:55 left as they held on for a 14-13 win.

QB Luke Altmyer scored on a 74-yard TD run on Starkville’s first offensive play and the Yellowjackets went on to build a 19-point lead before holding off a late West Point rally. Despite battling leg cramps, Altmyer finished with 315 yards passing and two TDs through the air.  — GAME STORY

Tate Collins rushed for a pair of touchdowns to lead Madison Central to a 31-20 win over Northwest Rankin.  — GAME STORY + PHOTOS

The Mississippi State commit rushed for 103 yards and two TDs on just 12 carries and caught five passes for 42 yards in Starkville’s 40-28 win.

Pittman did it all Friday with four touchdowns through the air and another on the ground in Magee’s 34-0 win over Collins.

The senior had a once-in-a-career type night with three interceptions in Hattiesburg’s 26-12 win over Laurel.

Triplett carried the ball five times for 107 yards and a touchdown and added two receptions for 49 yards and another TD in Caledonia’s 44-33 loss to Amory. He also picked off a pass on defense.

Irving started his sophomore season off with a bang, completing 25 of 32 passes for 432 yards with four passing touchdowns and another on the ground in a 35-14 win over Hancock.

Maffett was 5-for-5 on PATs and booted the game-winning 23-yard field goal in overtime to lift Pontotoc to a 38-35 win over New Albany.

Grant rushed for 130 yards and two touchdowns to lead West Lauderdale to a 49-28 win over South Jones.

Harris hauled in touchdown catches of 55 and 66 yards to lead Petal to a season-opening 35-14 win over Brookhaven.

Flanagan was key in Hernando’s near-upset of No. 3 South Panola, reeling in seven catches for 158 yards.

Vinson rushed for two touchdowns to lead MRA to a 20-10 victory over Jackson Academy.