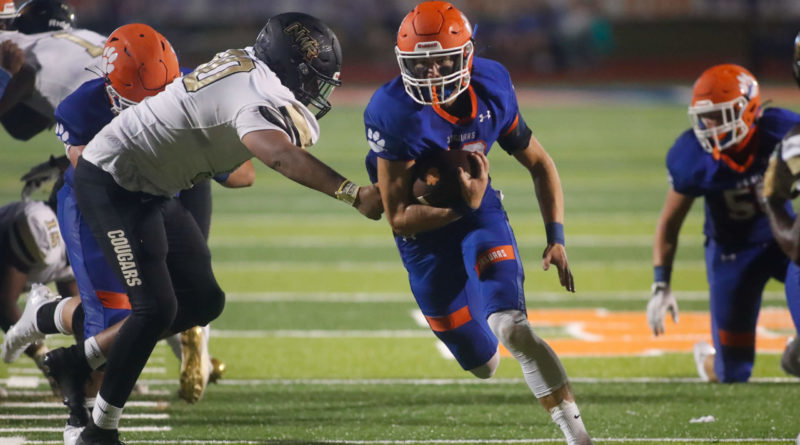 MADISON — High school football, COVID edition, kicked off in “The Jungle” Friday night in front of a modest, mask-wearing crowd. And the home fans were treated to a win as Madison Central opened the 2020 season with a 31-20 victory over Northwest Rankin.

Madison Central came out looking to establish the run, handing the ball to senior running back Duke Arnold on their opening drive. The drive eventually stalled and the Jaguars settled for a field goal to take an early 3-0 lead.

Northwest Rankin responded by giving the ball to junior running back Cam Marion, who looked like Derrick Henry most of the night, carrying multiple defenders on several plays. Northwest Rankin drove the length of the field, but Creek Robertson intercepted quarterback Caleb Parten’s pass in the red zone, ending the threat.

Northwest Rankin eventually got on the board on a 30-yard TD pass from Parten to Tuck Rowland late in the second quarter, giving the Cougars a 7-3 halftime lead.

In the second half, Madison Central quarterback Tate Collins did more damage with his feet than his arm, scoring twice on runs of 15 yards and 5 yards. Collins’ touchdowns gave the Jags momentum and fueled the defense.

“We started out a little slow but we were able to get things going,” said Madison Central coach Anthony Hart. “We were not sure exactly what they would do, but we adjusted well. I’m proud of my guys.”

Madison Central outside linebacker Joseph Perryman was a thorn in the side of the Cougars the entire game, recovering a fumble and constantly applying pressure.

As Madison Central started to pull away, Northwest Rankin seemed a little gassed and starting pressing. Parten threw another interception, then Arnold put the game out of reach, scoring two touchdowns.

On the final play of the game, Parten connected with Jordan Cavitt for a 36-yard touchdown.

The Cougars came into the game with heavy hearts, dealing with the tragic loss of linebackers coach Kelby Bowman who died in August. Before the game, there was a moment of silence for Bowman.

“I think it was important to get football started because it means so much to the state of Mississippi and the people of the metro area,” said Northwest Rankin head coach Toby Collums. “And I think they saw some good football at times. It was kind of a prize fight and in the second half we kinda wilted a little bit.”

Northwest Rankin will host Clinton next Friday while Madison Central travels to Pearl.