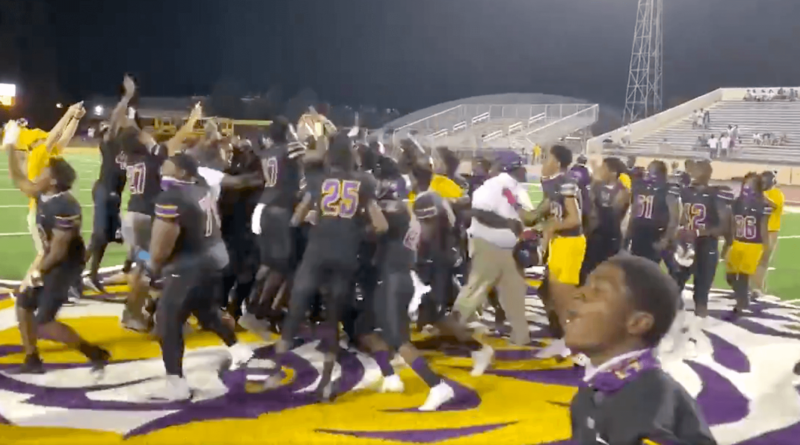 HATTIESBURG – There was much confusion on the field at D.I. Patrick Stadium following the Little Brown Jug game between Hattiesburg and Laurel.

The two teams – unable to shake hands because of COVID-19 protocols – stood on either sidelines barking at each other. Hattiesburg coach Tony Vance stood near midfield with a confused look on his face, gazing at the Laurel sideline and trying to keep his guys at bay.

When Laurel coach Ryan Ernest handed it to Vance a minute or so later, the Tigers went wild.

And why not? It’s not every day you upset your rival by double digits, as Hattiesburg did Friday with a stunning 26-12 win over the Tornadoes.

“I’m so proud of our guys,” Vance said, beaming ear to ear following the celebration with his team. “It means so much to us to get the trophy back after losing it last year and they’ve worked so hard to prepare for this game.”

Hattiesburg took advantage of eight turnovers at the expense of their rivals, who would have easily been a heavy favorite if Las Vegas laid the odds – even with the injuries the Tornadoes had coming in.

Laurel’s star tailback Xavier Evans made the 30-minute ride down Interstate 59 with his team, but didn’t suit up. If that wasn’t bad enough, star wideout Kanarius Johnson went down with an apparent knee injury on the first drive of the game.

“I’m not sure how many teams in this state could lose their two best players and still compete with a team the caliber of Hattiesburg,” Ernest said. “That makes it tough.”

With Evans and Johnson on the sideline, the Hattiesburg defense went to work.

The Tigers snagged five interceptions, forced and recovered two fumbles and forced one turnover on downs.

“We just played really well as a team,” said Hattiesburg defensive back Walt Thompson, who had three interceptions alone. “I just seemed to be in the right place at the right time tonight. I can’t explain it. I just tried to make my reads and play my guy.”

The Hattiesburg defense held Laurel to 56 total yards of offense in the first half and helped the Tigers build a 14-0 lead at the break.

After a scoreless first quarter, Hattiesburg senior quarterback Jermaine Powell tossed two touchdown passes in the second. He hit a 21-yard fade in the back of the end zone to senior Josh Jones, then he found Elvin Jackson on a short out-route, and the junior scooted past two defenders, dodged another and outraced the rest on a 43-yard touchdown.

The score remained 14-0 Hattiesburg until the 8:53 mark in the fourth quarter, when Laurel quarterback James Crosby completed his first pass of the night – a 32-yard scoring pass to Keanu White.

Hattiesburg blocked the extra point attempt, which made it 14-6.

Things got more interesting a few moments later when Laurel got a quick 3-and-out and blocked the punt off the foot of Hattiesburg’s punter, giving the Tornadoes the ball at the Hattiesburg 19.

They had a chance to tie it following junior Kiron Benjamin’s 9-yard touchdown run two plays later, but the two-point conversion attempt – a run up the middle – got stuffed by the Hattiesburg front seven.

Hattiesburg tailback Jaquez Andrews housed a run from 40 yards out on the ensuing possession to put the Tigers ahead 20-12. Sophomore Makel Jones put the game away moments later with a 30-yard interception return.

Vance – a Hattiesburg High class of 1994 graduate who played in this series himself – knows a little about what the trophy means to his guys.

He posed for a photo with Hattiesburg Mayor Toby Barker at midfield before reminding everyone that he’s still keeping score.

“That’s six out of the last seven against those guys,” he said. “We’ll take that all day.”