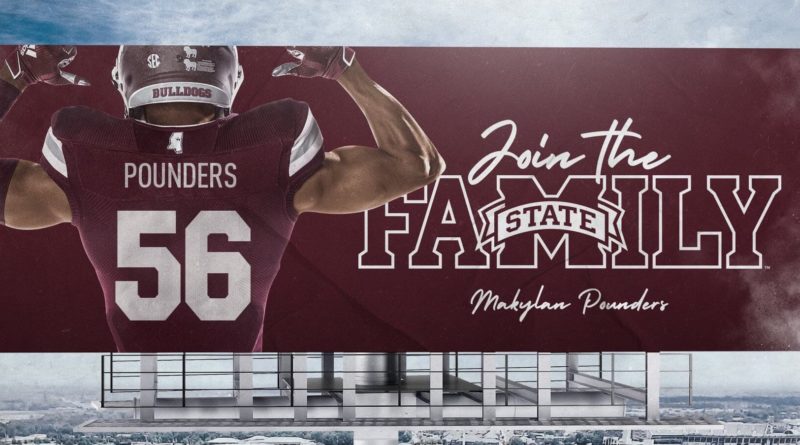 To kick off the 2020 high school football season we’re taking a look at the top players in Mississippi, position by position.

Here’s a look at the top offensive linemen in the state.

He doesn’t get the love the guys from the bigger programs get, but college recruiters have certainly taken notice of big 6-foot-5, 295-pound offensive guard Makylan Pounders.

Pounders is ranked as a 3-star prospect and the No. 51 overall guard in the country for the class of 2021, according to 247sports.com.

The 14th-ranked recruit in Mississippi for the class of 2021, Pounders committed to Mississippi State back in April.

Tackle Gabe Cavazos saw his stock soar after putting together a solid junior season at Lake Cormorant. Growing to 6-foot-5 and 290 pounds didn’t hurt him, either.

Cavazos is rated as a 3-star prospect and the No. 102-ranked tackle in the nation for the class of 2021.

The No. 20 overall recruit for Mississippi this year committed to Mississippi State in early August.

South Jones’ splendid 6-foot-4, 310-pound tackle Reid Gavin makes most of the defenders he faces a non-factor, and that’s helped him garner some accolades off the field.

The No. 31 overall recruit for the state of Mississippi committed to South Alabama back in June.

Another guy who saw his stock rise in the eyes of college recruiters last season was Madison Central’s 6-foot-2, 315-pound center Cam Richardson.

Richardson doesn’t have a rating from either of the big recruiting services, but college coaches have taken note. He currently holds offers from Jackson State, Alcorn State, Morgan State and Southeast Missouri State.

The first entry on our list from the junior class is 6-foot-6, 290-pound Presbyterian Christian tackle Carter Edwards.

Edwards is already rated as the No. 56 tackle in the nation for the class of 2022, according to 247sports.com, and the sixth-ranked recruit for the state of Mississippi.

Edwards earned his first SEC offer (from Ole Miss) prior to his junior season.

If you are looking for a tackle who is capable of taking on multiple defenders on nearly every down, you could do a lot worse than 6-foot-6, 320-pound Gautier lineman Bryson Hurst.

Hurst is a junior who doesn’t have an official rating from the recruiting services, but he’s a guy opposing coaches have to gameplan around.

Petal tackle Caleb Taylor is a guy that should pick up plenty of offers to play at the next level during his senior season. At 6-foot-4 and 340 pounds, he’s certainly got the size.

Although he has not been evaluated by the recruiting services, Taylor is a multi-year starter for Petal and one of the biggest reasons (literally) that the Panthers were able to roll for 3,195 rushing yards in 2019.

Petal coach Marcus Broyles, who has coached a lineman or two in 27 years, called him a natural leader and said he’s one of the best he’s had.

At 6-foot-7 and 275 pounds, Lewisburg’s Scott St. Aubin could be on this list on sheer size alone. St. Aubin has started both ways for most of his career, but will move primarily to offensive line this year.

Lewisburg coach Matt Gehrke said part of the reason for the move was that St. Aubin was starting to get more attention from college recruiters looking at him as an offensive lineman.

St. Aubin has not been evaluated by the recruiting services, but he picked up an offer from East Mississippi Community College in late July.

Another guy who is flying under the radar is 6-foot-3, 291-pound Brandon junior Peyton Dooley. Dooley, a guard, is a multi-year starter for coach Tyler Peterson.

Dooley was a force inside for Brandon as a sophomore last season, helping the Bulldogs to an average 4.1 yards per carry in Brandon’s pass-happy offense.

It’ll be interesting to see who jumps on Dooley first, because he’s going to be a player for someone at the next level.

How do you get around a guy who is 6-foot-6 and 365 pounds? The most common answer is “you don’t.” But that’s exactly what opposing linemen face when they match up with Magee junior guard Zyrus Craft.

Craft has not been evaluated by the recruiting services, but already holds offers from Ole Miss, Mississippi State, Jackson State and Alcorn headed into his junior season.