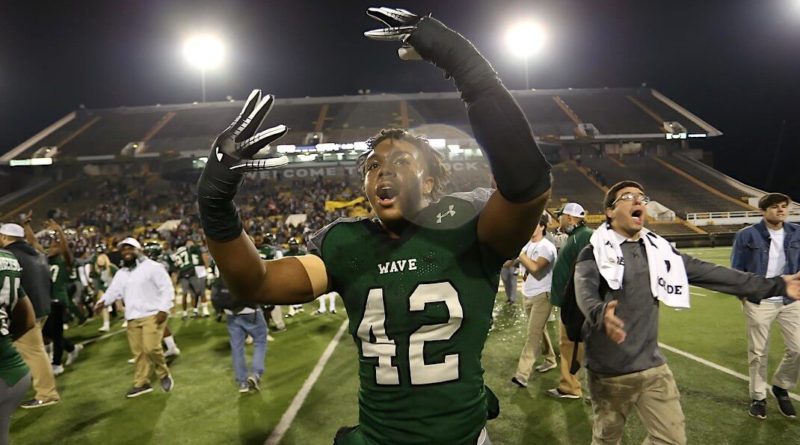 To kick off the 2020 high school football season we’re taking a look at the top players in Mississippi, position by position.

Here’s a look at the top defensive linemen in the state. (Feature photo by Keith Warren)

Sumrall has not produced a ton of big-time college talent in the past, but defensive tackle Cole Daniels is as solid of a prospect as you’ll find in the Pine Belt. At 6-foot-2 and 290 pounds, he’s an aggressive interior lineman with good size.

Daniels put together a solid junior season with 60 total tackles, including 13 in the opposing backfield, with two sacks.

The 3-star prospect is currently rated as the No. 29 overall player for the class of 2021 in Mississippi and the 102nd-rated interior defensive lineman in the country, according to 247sports. He committed to South Alabama back on April 1.

The second University of South Alabama commit on our list is Horn Lake defensive tackle Thurman Rayborn. Like his future teammate Cole Daniels from Sumrall, Rayborn has great size at 6-foot-2 and 320 pounds with a high motor.

As a junior, Rayborn recorded 12 tackles behind the line and put together a highlight reel that is 7.5 minutes of pure domination.

He’s currently rated as the No. 34 overall prospect for the class of 2021 and the 117th best defensive lineman in the country, according to 247sports.

The next guy on our list hasn’t missed many meals. How else to explain how Columbia junior Jaheim Oatis grew to 6-foot-6 and 350 pounds?

Oatis was on college recruiters’ radars long before he entered high school. The 4-star prospect posted a photo of himself with Alabama Crimson Tide coach Nick Saban just before his 8th grade season.

Rated as the No. 2 overall prospect for the class of 2022 in Mississippi, Oatis still holds offers from LSU, Alabama, Georgia, Mississippi State and Ole Miss, among others.

Another junior on our list is Germantown’s huge defensive end Zxavian Harris. At 6-foot-6 and 300 pounds, Harris has surprising speed off the edge that has garnered a lot of attention headed into his junior season.

He was credited with 62 tackles as a sophomore, recorded eight sacks and blocked one field goal and one punt.

The 3-star prospect is rated as the No. 3 overall prospect for the class of 2022 in Mississippi and holds offers from Auburn, Florida State, Ole Miss and Mississippi State, among others.

Louisville has produced some great players over the years, and 6-foot-4, 240-pound Ty Cooper will soon join that list.

As a junior, Cooper was credited with 63 total tackles, including a whopping 21 stops behind the line of scrimmage with nine sacks.

The 3-star prospect is rated as the 22nd-highest ranked recruit for Mississippi’s 2021 class, according to 247sports. He holds offers from Mississippi State, Ole Miss, Southern Miss, Colorado and Tennessee, among others.

West Point has a slew of FBS talent, but few have the kind of upside 6-foot-3, 230-pound senior defensive end Jaquarius Thomas possesses.

As a junior, Thomas recorded 80 tackles and six sacks and helped West Point to a fourth-straight 5A state championship.

He’s getting looks from Ole Miss, Mississippi State and Tennessee, among others, and has already garnered offers from several junior colleges, including East Mississippi.

Maxton Woodward is another Neshoba Central prospect who has flown somewhat under the radar, but should be a household name in Mississippi before his high school career is over. At 6-foot-2 and 330 pounds, he’s the ideal size for a defensive tackle and plays the part to perfection.

Woodward was credited with 77 tackles – including eight behind the line – and forced one fumble and recovered three others as a sophomore.

Although he’s yet to receive a rating from recruiting services, Woodward already holds an offer from Southern Miss and has garnered interest from several other schools.

Folks in Mississippi might not know the name R.J. Moss, but they soon will. Moss transferred from Belle Chasse, Louisiana following his sophomore season and at 6-foot-4 and 250 pounds, he’s going to make an immediate impact with Biloxi.

“He’s a good kid who makes good grades and answers every question with a ‘yes sir’ or ‘no sir,'” Biloxi coach Katlan French said. “We haven’t seen him in action in a game yet, but we can’t wait.”

Although he doesn’t have a rating from the recruiting services, the junior defensive end has picked up offers from Arkansas, Mississippi State, Ole Miss and Southern Miss in the past two weeks.

Smith was a force for Biloxi last season, racking up 69 tackles – including seven behind the line – with three sacks, a forced fumble and one recovery.

It’s no surprise that the Provine’s big 6-foot-6 junior defensive end received his first Power 5 offer a couple of months prior to what was supposed to be the start of his junior season.

The surprise is that the first offer came from Arizona State and not one of these colleges a little closer to home. As a sophomore in 2019, Russell was credited with 46 total tackles – including 11.5 behind the line of scrimmage – with seven sacks and one forced fumble.

Mississippi State has also shown interest, but it will be interesting to see what effect Provine and the rest of JPS canceling football this season will have on Russell’s development and recruitment.