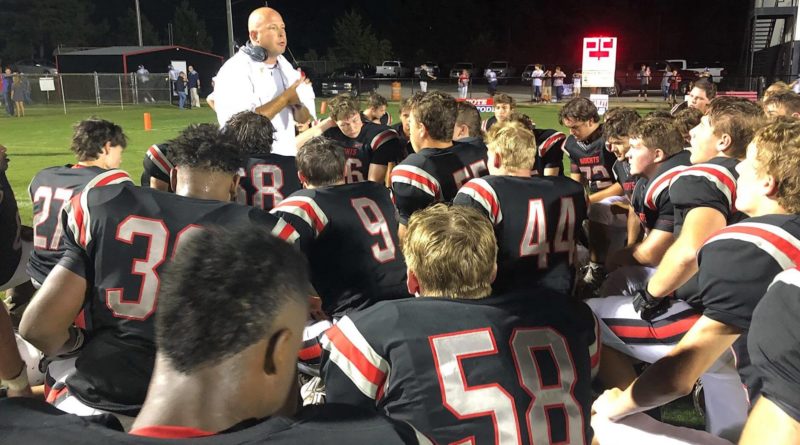 Here is an inside look at the 2020 West Lauderdale Knights football team.

West Lauderdale was a young team on the cusp of making waves in 4A last year, and there’s plenty of reason to think the Knights will be right in the thick of it in 2020.

Coach Brock Clay lost just nine seniors off of a team that went 8-5 despite outscoring opponents 352-173. The Knights only have nine seniors again this year, but the young talent that was forced to play key roles now has a year of experience under its belt.

“We’re young again,” Clay said. “But we have a lot more experience now than we did at this time last year and I have a tremendous amount of confidence in the guys we have coming back.”

The Knights’ success could hinge on whether or not the offense gels with a new quarterback under center. Sophomore Jackson Parker will take the reins after spending his freshman season at receiver.

Parker is a dual-threat guy with good speed who led the team in receptions as a junior with 37 catches for 450 yards and four touchdowns.

“He could have started last year,” Clay explained. “But we had senior Eli Bryan, who was more than capable, and we felt like Jack gave us our best option at receiver. Now that Eli has graduated, Jack is the natural fit at quarterback, and we expect big things out of him.”

The staff is counting on junior Wyatt Castle to step into Parker’s role at receiver. Castle is not a huge target at 6-feet and 170 pounds, but flashed his potential last year with 20 catches for 258 yards and four touchdowns in his first year with the varsity. Sophomore Brett Busbea is also back after missing most of his freshman year due to injury.

The real weapon on offense for West Lauderdale is junior tailback J.J. Grant, who Clay feels is one of the best at his position in the state. Grant is a third-year starter who averaged 6.2 yards per carry last year on the way to a 1,492-yard season with 18 touchdowns.

He’ll be running behind an offensive line that returns three starters – center Lane Williams, right guard Javaion Merrell and right tackle Will Withers. Williams is a sophomore who started last season as a freshman and Merrell and Withers are both seniors who are multi-year starters already.

On defense, the Knights return a slew of talent in the front seven and several key pieces in the secondary.

Defensive tackles Commondre Cole and Eli Bates both started as sophomores last season. Cole, who has tremendous upside at 6-foot-3 and 275 pounds, finished the season with 77 total stops, 11 tackles for a loss and four sacks. Bates was credited with 46 tackles, with 11 of them coming in the opposing backfield.

“Those two are as good as any two we saw last season,” Clay said. “Commondre is the guy everyone is talking about, and with good reason, but Eli was right there next to him last season and did an excellent job for us. We’re really excited to see what they can do this season.”

Coaches are also excited about the improvement of sophomore defensive end Jordan Gowdy, who played important snaps down the stretch last season as a freshman. He’ll start opposite junior Peyton Coleman at the other end position, but those two will rotate a good bit with junior Chris Griffith and senior Dylan Williams.

At linebacker, junior Dillon Williamson is back after recording 51 stops as a sophomore, and senior Mick McNeil logged 60 tackles despite splitting playing time.

On the back end, the team’s leading tackler Zach Walker has moved from linebacker to safety, which Clay thinks better fits his size and playing style. Walker played several different positions for the Knights last year, and excelled in all of them with 123 stops and nine tackles for a loss.

Junior Dillon Brown is the other safety. He was an all-region selection last season after recording 91 stops. Clay has several good options at corner, led by the trio of sophomore Jaden Kirkland and juniors Bradon Epting and Jordon Nix.

“The kids have responded really well this off-season and through these first weeks of fall practices,” Clay said. “We just have to keep up this same level of consistency. I feel like the teams that do the little things right the most are the ones that are going to see success this season, so that’s our focus.”