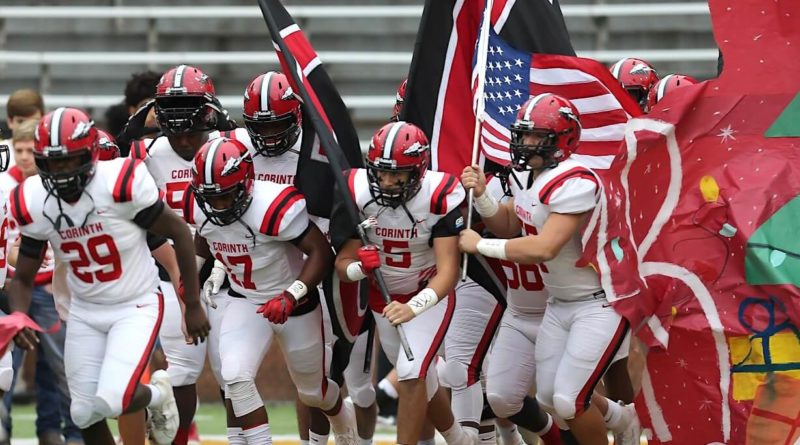 Here is an inside look at the 2020 Corinth Warriors football team. (Feature photo by Keith Warren)

When Todd Lowery first got into coaching in the 90’s he remembers how South Panola was the program that set the standard for the rest of Mississippi and across the Southeast.

Since he arrived at Corinth in 2016, Lowery has been trying to establish the same kind of winning culture. The Warriors have improved in each season since. After winning four games in 2016, they won seven in 2017 and went 11-3 in 2018. Last year, the Warriors ran roughshod through the playoffs on their way to the program’s first-ever state title.

“It wasn’t like this was a losing program before I got here,” Lowery said. “Corinth had lost three years in a row in the first round of the playoffs, and we had to adjust the schedule to get us ready for postseason play. We started to schedule tougher games, and the players bought in. It really started clicking about halfway through that second season.”

The Warriors have been rolling ever since, but now comes the hard part – maintaining that level of dominance, South Panola-style.

“I told our guys when we first got back started after last season that last year’s team was good, but that’s last year,” Lowery said. “To become that powerhouse program, you have to keep it going year after year, despite the turnover on the roster.”

And although the Warriors had a fair amount of turnover, there’s plenty of talent waiting in the wings.

That starts at quarterback, where Lowery has spent the offseason trying to find a replacement for departed senior D.T. Sheffield. Sheffield was a dual-threat guy who thrived in Lowery’s Wing T offense, passing for more than 1,200 yards, rushing for 900 more and accounting for 36 total touchdowns.

He’ll be tough to replace, but the Corinth staff thinks they’ve found a gem in sophomore Brawner Cregeen (pronounced Cre-jeen). Cregeen has decent size at 6-foot-1 and 210 pounds, and Lowery likes his footwork.

“He’s also got a cannon,” he said. “He works hard and does everything that’s asked of him and then some. He just needs a couple of games under his belt.”

Corinth has enough support around him to let the sophomore develop, too.

The Warriors return four of five starters on the offensive line, and although that one was Samford signee Cooper Frazier, the four returning starters are all seniors – Dalton Hurley, Parker Little, Dominic Singleton and Jonathan Shanks.

Last year’s leading rusher Tameron Patterson is gone, but Lowery said he’s excited about the prospect of rebuilding the running game around senior Nazarius Jones. Although he played mostly on defense at the corner position last season, Jones averaged 10.5 yards per carry on 55 attempts last season with five touchdowns.

“He’s just one of those special, special players,” Lowery said. “I wanted him on offense last year, but we had so many good backs and we needed help in the secondary.”

Asked if he’ll still play some corner this season, Lowery doesn’t hesitate: “No, that sucker is a running back.”

The real question mark is at receiver, where the loss of Calvin Jones and D.K. Gains has left the Warriors without a returning player with more than 10 receptions. Cayden Betts, Corinth’s Swiss army knife of an athlete, could help here. He caught just seven passes last season, but four of them went for touchdowns. Betts will also serve as a second option at tailback.

“Cayden is a kid that’s already been offered by Navy,” Lowery said. “He was an all-state safety last year and played a ton of snaps on offense. He’s a super-smart kid who studies the game. He’s lean at 6-3 and 205 pounds and he’s a legit 4.6 (40-yard dash) guy.”

He’s also a leader on the Warrior defense, which held opponents to just 13.4 points a game a year ago.

It’ll be hard to match that effort in 2020 without stalwart defensive lineman Deshaun Brooks, but there’s hope. Dominic Singleton, who also starts on the offensive line, looks ready to step into that nose tackle position, and senior Elgin Harris is back after recording 61 stops as a junior last year. Brandon Pham looks to hold down the other defensive end spot, but will likely also play some outside linebacker.

Everyone in Corinth is excited to see what comes next for linebacker Jay Cummings as well. Cummings started at middle linebacker as a freshman last year and turned in a stellar season. In addition to the 80 total tackles, he also forced a fumble and recovered two others. Sophomore Chris Rodgers has made the transition from safety to the other outside linebacker position.

Aside from Betts, the Warriors also return a good bit of experience in the secondary.  Senior Braxton Curlee started half of last season at safety, and senior Christian Barber is back at the other corner spot.

“I’m extremely confident in this group of guys we have this year,” Lowery said. “We had a big class of seniors last year, and we were successful. I tell our guys all the time: this team hasn’t achieved anything yet. We’re going to find out whether we were a flash in the pan or if this is a consistent, winning program.”