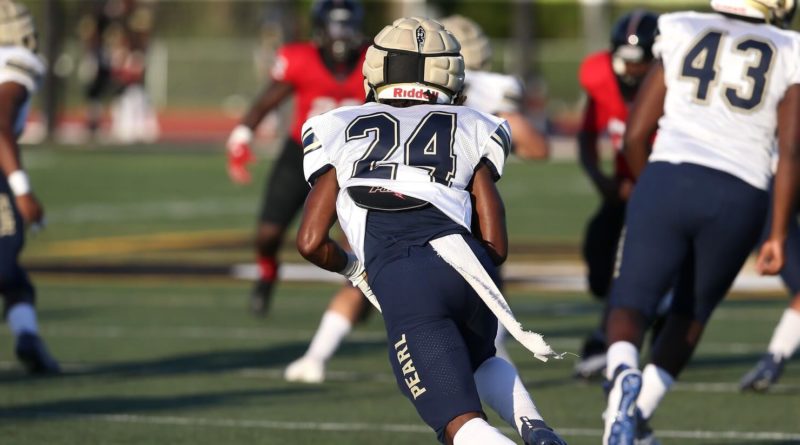 Here is an inside look at the 2020 Pearl Pirates football team.

It’s never easy taking over for a beloved head coach, but the transition has gone fairly smoothly for first-year Pearl coach Justin Hunter.

Hunter was promoted from offensive coordinator to head coach with the departure of John Perry, who led the Pirates on that remarkable 16-0 state-championship run just three years ago in 2017.

Hunter would love to pull off a similar run of his own, and he’s got a great nucleus of guys to work with in his first year.

“We’re inexperienced in more than a couple of spots, but I’ve got great kids that work their tails off,” Hunter said. “They love football and each other. They’ve been waiting their turn to play, and they are about to get it, because we lost 18 of our 22 starters to graduation.”

The good news for the Pirates is they do have experience at key positions on offense.

Quarterback Shade Foster didn’t play much as a junior, but went through his trial-by-fire as a sophomore in 2018. After injuries ravaged the roster, Foster stepped in and completed 63 percent of his 165 pass attempts for 1,039 yards with 12 touchdowns and eight interceptions.

“We had no choice but to throw him out there, even though he wasn’t ready,” Hunter said. “He responded by doing just a great job for us, and he’s grown as a player and has become a natural leader since then.”

Pearl also returns versatile athlete Jerry Johnson, who burst onto the scene as a freshman on that 2018 team with Foster. In two seasons, the junior has caught 95 passes for 1,047 yards and nine touchdowns at receiver and averaged 8.7 yards on 49 carries as a tailback with eight more scores.

“His nickname is J-bird and he’s our best player,” Hunter said. “We had to ask him to play some defense last season last season, and he was one of our best on that side of the ball too, just an incredible athlete. As he goes, we go.”

Pearl will have new starters across the board on the offensive line, but Hunter said he’s excited about the group under line coach Nathaniel Worrell. Right now, there are six players – Reid Grantham, Colby Spence, Hayden Jackson, Connor Foye, Connor McHenry and Bradley Keenan – competing for the five starting spots.

“We knew we were going to be inexperienced up front,” Hunter said. “But I feel good about that group under Nathaniel, because I watch them work and he gets every ounce of everything they’ve got, and they’ve taken on his personality.”

Tight end Leo McIntyre, who has great size at 6-foot-3 and 260 pounds and can run, rounds out the offense.

On defense, Pearl has a lot of young talent that will try to replace a slew of starters.

Up front, senior Charles Stevens is back having started all of last year and receiving significant playing time in 2018 as a sophomore. Junior Jeremy Jackson played a lot as a sophomore, and appears ready to step into a starting role as well.

At the second level, Hunter has moved Trystin Carpenter, who served as an H-back on offense last year, to middle linebacker. He’s hoping the 6-foot-2, 200-pound junior will anchor the defense.

“He’s really leaned into the leadership role on that side of the ball,” Hunter said. “He’s the kind of guy that you could go out there and practice for five hours and he’d be ready for more… just a relentless work ethic.”

Corner Marcus Mosely is the only experienced player returning in the secondary. He was forced into action due to injuries last year, but the track star’s speed and athleticism showed what he is capable of doing.

For a team that is looking to replace so many starters and rebuild depth at practically every position, Hunter said staying healthy will be key.

“We’re going to be fine, despite all the new faces,” Hunter said. “What killed us last year was the injuries. We got banged up early and it had a domino effect throughout the season. You can’t really control that, but as one of the smaller 6A schools in the state, it’s important for us to have all hands on deck.”