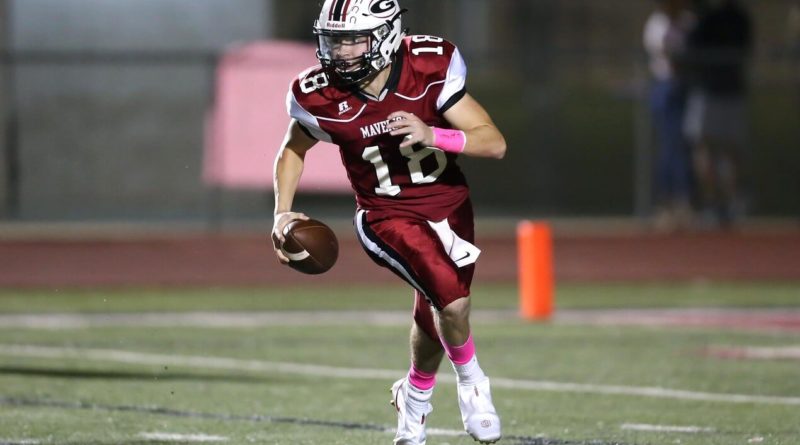 Here is an inside look at the 2020 Germantown Mavericks football team.

Germantown leapt into the 6A ranks last season with mixed results.

The Mavericks suffered through what-could-have-been games and moral victories that remained close in the second half, but couldn’t get over the hump against the big boys in Region 2.

“We made a little noise and did some things,” coach Tim Shramek said. “But it’s a tough division with a lot of really good teams that are coached by really good coaches.”

This offseason, unprecedented in so many ways, comes at a pivotal time for the Germantown program. When the pandemic hit, Shramek challenged his team to stay vigilant and keep each other accountable.

“Our guys responded well to the summer workouts in a limited capacity,” he said. “From what I can tell, everyone has improved. Like a lot of other teams, we’re probably not as strong as we’d like to be. But there’s a lot of excitement and our guys are working hard. We feel like we could be pretty good, but that doesn’t mean a whole lot in Region 6-2A, where you can be good and go 2-5.”

The biggest problem Germantown ran into last season was the lack of explosive plays on offense. The Mavericks were steady, averaging 271.5 yards of offense per game over the course of the season. But that didn’t translate into points in key games – in its five losses against region opponents, Germantown averaged just 11.4 points.

There’s reason to think that will change in 2020, thanks to a slew of returning starters who are a year older and a year stronger.

That group starts with the backfield trio of quarterback Colton Gardner and tailbacks Nick Barnes and Branson Robinson. Gardner is coming off of a solid junior season in which he completed 46 percent of his passes for 1,448 yards with 10 touchdowns and 11 interceptions. Barnes and Robinson combined for more than 800 yards and 15 touchdowns, with Barnes doing the heavy lifting.

At receiver, juniors Jarrett and Tykwon Wade are back after combining for 36 catches for 341 yards and four touchdowns. If Cole Burton, Jayden Hart and Monterio Walker can smoothly transition to bigger roles, that unit will be better, despite losing its top two targets from a year ago.

“We have two really good running backs and a really good quarterback,” Shramek said. “We’re young at receiver, but we’ve improved there as well. Our offensive line is always good.”

The Mavs were also solid on defense a year ago and should be again in 2020.

It all starts up front with junior lineman Zxavian Harris – a 6-foot-6, 315-pound four-star college prospect who already holds offers from Florida State, Ole Miss, Mississippi State, Tennessee and a slew of other big-time college programs. He lines up at end, and pairs well with senior Chris Sanders, who has the ability to line up at outside linebacker and provide an edge rush.

Junior linebacker Devin Arrington is starting to draw interest from college scouts following his 111-tackle sophomore season, and senior John Lewis is back after recording 53 stops in just eight games as a junior.

“That may be our most improved unit,” Shramek said. “We’re going to end up being two-deep in the secondary with guys who we can plug in at any time.”

Senior Dylan Wasson is back for his senior year having handled all the kicking duties for the Mavericks as a junior.

Shramek said identifying leaders on the team is an annual priority, but said the COVID-19 situation has made that job a little easier.

“That’s what has been funny thing about this situation,” Shramek said. “Kids in the old days, taking part in the summer workouts and practice was something they dreaded. Well since the virus, the attitude is totally different. Now they get to go to practice. I think every kid has a whole new outlook. So, that has in other ways, built a culture of a bunch of leaders and everyone being positive.”