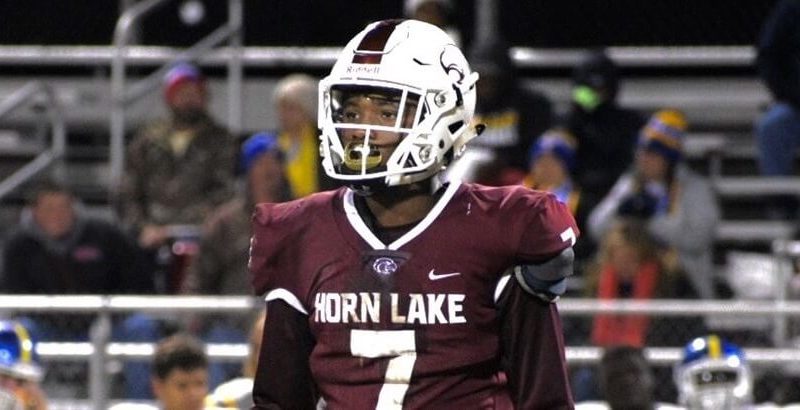 Here is an inside look at the 2020 Horn Lake Eagles football team.

When a school replaces its retiring head coach with one of his long-time assistants, it usually eases the transition. But that hasn’t been Mitchell Harville’s experience since he took over for Brad Boyette at Horn Lake.

“Every day is a journey,” Harville explained with a laugh. “And because I don’t do anything easy, adding in the COVID-19 protocols has made things interesting, for sure.”

In a sort of baptism-by-fire, Harville had a fraction of his original roster on hand for the first day of practice in pads on Aug. 17, with several players opting for the online-learning experience, which means no football.

Horn Lake is down to two returning starters on offense and six on defense after the attrition, but that hasn’t dampened the optimism around the 2020 season. And why should it? The Eagles still have plenty of talented players.

The offense is sure to center around one of the best, junior Jarnorris Hopson, who spent time at quarterback, running back and receiver last season and will likely do the same this year.

“We plugged him in all over the place last year and he got us to the playoffs,” Harville said. “I don’t know what it is, but whatever it is, he has it.”

When Hopson isn’t lined up at quarterback, that job will likely be filled by junior Trinton Conder or senior Kris Higginbottom, who are still competing for the job.

The offensive line is completely up in the air after the one starter the Eagles had returning opted for online learning.

Whoever fills those roles will help pave the way for Hopson and Horn Lake’s returning starter at tailback, Jamario Harris.

“We’re going to have a brand new line, and I’m not sure who is going to play up there just yet,” Harville said. “We haven’t really seen the guys get after it in pads, but I know we’ve got some young, inexperienced guys with a lot of potential.”

The X-factor for Horn Lake on offense is likely tight end Jalen Lipscomb, a converted wide receiver Harville admits is playing out of position.

The situation on defense is much more solidified headed into preseason practices, and that starts up front.

At 6-foot-3 and 320 pounds, senior Thurman Rayborn is one of the best nose guards in the state. The coaching staff is hoping senior defensive end R.J. Whitehead (6-foot-3, 230 pounds) can give the Eagles a pass rush off the edge.

Dylan Bullard returns at outside linebacker after starting all 12 games as a sophomore last year, and senior Kylan Isabell returns as the starter at middle linebacker. Xavier Simmons, who missed most of the 2019 season, will likely get the start at the other outside ‘backer position.

Senior corner Charles Thomas is the lone returning starter in the secondary, but backup quarterback Rashard Daniels has successfully made the transition to defense and will likely man the other corner spot in his junior year. The safety positions are still up for grabs, and could start out as a rotating group of several players.

“We’ve got some guys, particularly on defense, that could really take off this year,” Harville said. “We are still trying to develop some depth behind that first 11, but right now, we look like we will be pretty solid.”

“You just can’t sleep on any of these teams up here. We have to be 100 percent prepared going into every game, especially with the numbers the way they are.”