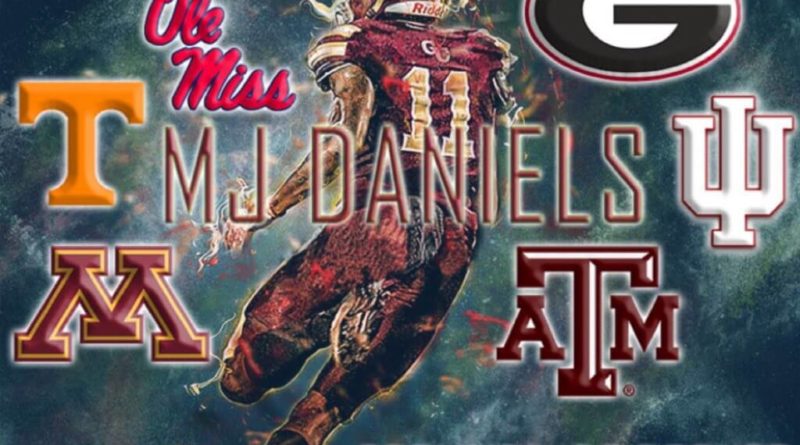 With the 2020 high school football season just around the corner, we’re taking a look at the top players in Mississippi, position by position.

Here’s a look at the top defensive backs in the state:

When you talk about size and strength, few defensive backs in the state have share the stature of George County’s 3-star corner prospect M.J. Daniels. At 6-foot-3 and 185-pounds, the rising senior is as big or bigger than most wideouts he lines up against.

He rose through the recruiting ranks last season, when he was credited with 23 tackles – including 18 solo stops – and recorded four interceptions. He’s currently rated as the No. 27 overall corner prospect in the country for the class of 2021.

Daniels holds offers from at least 12 different schools, including from Georgia, Texas A&M and Auburn, as well as all three of Mississippi’s FBS schools. He de-committed from Ole Miss in June and, as of mid-July, he remains uncommitted.

There are several excellent cover corners on this list, but D’Iberville’s Justin Walley is right up there among the best. At 5-foot-10 and 170 pounds, the 3-star defensive back prospect is rated as the 53rd best cornerback in the nation for the class of 2021.

The rising senior has been starting since he was a freshman and has taken on a bigger role for the Warriors each season. Walley has six career interceptions in 33 games and has been credited with 163 tackles, including 74 last season. He also forced seven fumbles and blocked two punts and a field goal last season.

Walley remains uncommitted despite holding at least 11 FBS offers from all three in-state schools as well as Auburn, Baylor and Memphis, among others.

If you’re looking for a versatile playmaker who can do it all, Holmes County athlete Corey Ellington is that guy. Ellington projects as a safety at the next level, but at 6-foot-3 and 185 pounds, the 3-star prospect would be considered one of the state’s top receivers if that was the only position he played.

In addition to averaging 17.9 yards on 48 receptions with 15 touchdowns last season, Ellington also recorded seven interceptions and was credited with 40 tackles in 13 games and played on all the special teams units.

Ellington held at least nine offers when he pulled the trigger and announced he was committing to Mississippi State on April 30.

The first player on our list from North Mississippi is Lafayette County’s 6-foot, 175-pound 3-star corner Brendan Toles. The athletic rising senior saw limited time in his sophomore year, but worked his way onto the radar of many college recruiters with a breakout junior season.

In 11 games last year, Toles recorded one interception and was credited with 52 total stops. He was instrumental in helping the Commodors to a 9-2 regular season record and a playoff win over Holmes County Central.

The No. 150 overall cornerback prospect in the country (according to 247sports.com) is currently committed to Louisiana Tech, but still holds offers from at least eight other schools, including Mississippi State and Tulane.

The only junior on our list is the second from Holmes County. The 5-foot-11, 150-pound Khamauri Rogers is currently rated as the No. 6 cornerback for the class of 2020 and a 4-star prospect by 247sports.com.

Rogers caused all kinds of problems for opposing receivers in his sophomore season. He was credited with breaking up 22 passes and recorded four interceptions to go along with 46 tackles. Fun fact: he also serves as the team’s punter, and averaged better than 41 yards on 30 punts last year.

With more than 27 offers, it seems like every school in the country is vying for Rogers’ services at the next level. He’s already committed to LSU, and picked the Tigers over a slew of other SEC teams, as well as Arizona State, Florida State and Miami.

Few safeties in the past couple of years have generated the interest that Biloxi senior Elijah Sabbatini has. At 6-foot-1 and 195 pounds, the 3-star recruit is an absolute thumper who can also cover.

Sabbatini started creating buzz as a sophomore, when he recorded 88 total tackles, including six for a loss, with one pick, a forced fumble and three blocked field goals. He was even better as a junior, tallying 93 stops with two sacks and three interceptions.

Sabbatini held no fewer than 15 scholarship offers from FBS schools when he committed to Ole Miss on June 29.

The next entry on our list is new to Mississippi but has a name that is synonymous with great cornerback play. At 5-foot-10 and 170 pounds, Jackson Academy’s Lardarius Webb, Jr. has lived up to the name of his father – former Baltimore Raven Lardarius Webb – and is currently rated as a 3-star recruit by 247sports.

Webb transferred to JA from Beauregard High in Opelika Alabama after recording 51 tackles and three interceptions in his junior season.

Webb committed to Nebraska on July 7, but has also generated interest from several schools in Alabama and Southern Miss, where his father played before transferring to Nicholls State.

We know, we know: Neshoba Central’s Jarquez Hunter is going to be a running back at the next level. That doesn’t change the fact that the 5-10, 185-pound bruiser is also undoubtedly one of the best pass defenders in the state.

In addition to being one of the best tailbacks in the state, Hunter also recorded 72 tackles and four interceptions and was credited with six pass break-ups last year. That came after 81 tackles and two interceptions in his sophomore year.

Hunter holds offers from at least 15 different schools, including Auburn, Ole Miss, Tennessee and Southern Miss, but they all want him as a tailback. If he didn’t play on the offensive side of the ball, he’d still have plenty of offers.

The next entry on our list – 6-foot, 170-pound Hernando corner Jay Ware – has flown under the radar due to injuries. The rising senior was beginning to garner some serious attention from FBS schools when he suffered a shoulder injury that sidelined him for most of his junior season.

Despite playing in just nine games as a junior, Ware recorded 22 tackles and two interceptions. He was also credited with six pass break-ups.

Ware’s recruitment has been hampered by the COVID-19 pandemic as much as anyone’s. After battling back from injury, he wasn’t able to attend summer college camps and currently does not hold any FBS offers. Ware hopes to change that with a big senior year. Said one coach: “If it was not for the injury and the virus, Jay would be on everyone’s list.”

Nanih Waiya’s 5-foot-10, 170-pound safety Austin Sanders may not play for one of Mississippi’s bigger schools, but when you play a huge role in back-to-back state title games, you’re gonna get noticed.

Sanders showed the physicality he brings to the free safety position as a junior last year, when he was credited with 76 total stops and one interception and helped the Warriors to a win over Lumberton in the 1A state title game. That performance came one year after he sealed the 2018 state championship game with the sixth interception of his sophomore season.

As with past athletes from smaller schools in Mississippi, Sanders is currently being overlooked.