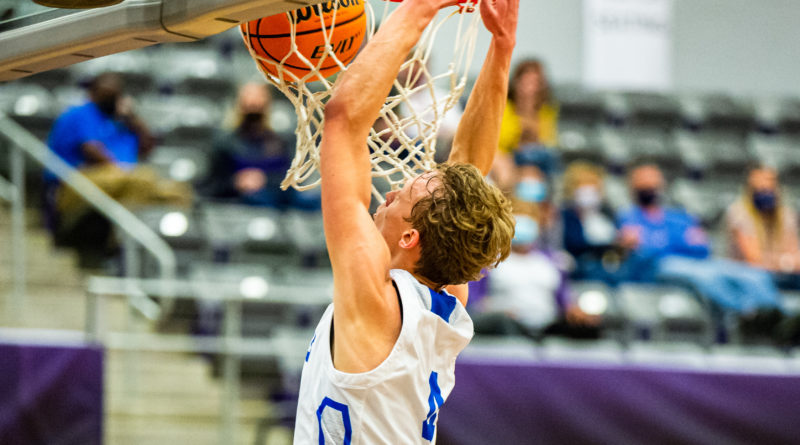 Berget drained six three-pointers as Hancock knocked off Sleepy Eye St. Mary’s 65-53 in the semifinals. The 6-foot-1 senior is averaging 14.1 points per game.

Thompson is averaging more than 25 points and 10 rebounds as a junior. The 6-foot-7 forward had 20 points and 19 boards in the semifinals.

Matti, a 6-foot-2 sophomore standout, is averaging 17.3 points, 3.4 rebounds and 3.6 assists. The Vikings blew past Badger/Greenbush-Middle River 79-53 in the semifinals.

One of the state’s top uncommitted seniors, the 6-foot-3 Slaathaug poured in 34 points during Hayfield’s semifinal victory. He is averaging 25.5 points, 4.8 rebounds, 4.2 assists and 1.6 steals.

The 6-foot-5 Klug scored a team-high 14 points in the semifinals as Caledonia, which hasn’t won a state title since 1997, stunned Minneapolis North 60-55. Klug is averaging 13.1 points and will play college baseball for North Iowa Area Community College.

Privet is averaging 13.1 points for balanced Caledonia. The 6-foot-8 senior will play in college for Northern Michigan.

The 6-foot Dufault is averaging 20.4 points for Waseca, which rolled past Fergus Falls 72-58 in the semifinals. Dufault will play Division I college basketball for St. Thomas.

One of five finalists for Minnesota Mr. Basketball, Morgan is averaging 22.7 points this season. The 6-foot-9 big man turned down an offer from Iowa to play for North Dakota State.

The 6-foot-5 Williamson is a Minnesota State Mankato commit who averages 15 points for Waseca, which is trying to win its first state title since 1918.

Hoskins filled up the stat sheet with seven points, three rebounds and four assists as Alexandria stormed back to defeat Richfield 66-64 in the semifinals. Hoskins, a 5-foot-11 guard, recently committed to play football for P.J. Fleck at Minnesota.

Alexandria’s leading scorer, the 6-foot-5 Roderick had 12 points, three rebounds, seven assists, two steals and a block in the semifinals. The Bemidji State signee has Alexandria in the state final for the first time since 1943.

Aligbe would put up monster numbers on nearly any other team in the state, but the 6-foot-6 junior is averaging a modest 11.2 points per game for loaded Minnehaha Academy. Aligbe, a four-star recruit, is No. 125 nationally in the 247Sports composite rankings.

Son of rapper Master P, Miller followed a recent trend among some top-level recruits by committing to HBCU Tennessee State over offers from bigger programs. The 6-foot-3 guard is averaging 11.2 points.

The 2021 Naismith Boys High School Player of the Year and the consensus No. 1 recruit nationally, Holmgren put up 25 points and 16 rebounds in Minnehaha’s semifinal rout of 3A power DeLaSalle. The 7-foot Holmgren remains uncommitted and could follow former Minnehaha star Jalen Suggs to Gonzaga.

A four-star recruit in the Class of 2022, Holloman checks in at No. 55 nationally in the 247Sports composite rankings. The 6-2 guard also is a coveted football recruit and is averaging 20.3 points, 4.6 rebounds, 9.1 assists and 4.4 steals on the basketball court.

The 6-foot-4 senior is averaging 7.8 points, 6.3 rebounds, 1.5 assists and 1.9 steals for defensive-oriented Cretin-Derham Hall, which defeated Maple Grove 54-42 in the semifinals. The Raiders won the 2018 state championship in their most recent title game appearance.

Mendez is a three-sport athlete who will play college football for North Dakota State College of Science. The 5-foot-10 senior guard is averaging 9.1 points, 3.1 rebounds, 1.9 assists and 1.6 steals.

A 6-foot-1 guard who will play college basketball for Minnesota State-Moorhead, Beeninga is averaging 14.8 points during his senior season for Wayzata, which routed Shakopee 72-43 in the semifinals. Wayzata is one win from claiming its first state title since 1959.

Bjerke stands 6-foot-9 and has excellent touch around the rim. He holds an offer from St. Thomas and is averaging 14.4 points.

One of the state’s top juniors, Heide is a four-star prospect and rated the nation’s No. 97 overall recruit in the 247Sports composite rankings. The 6-foot-6 swingman is averaging 17.9 points.