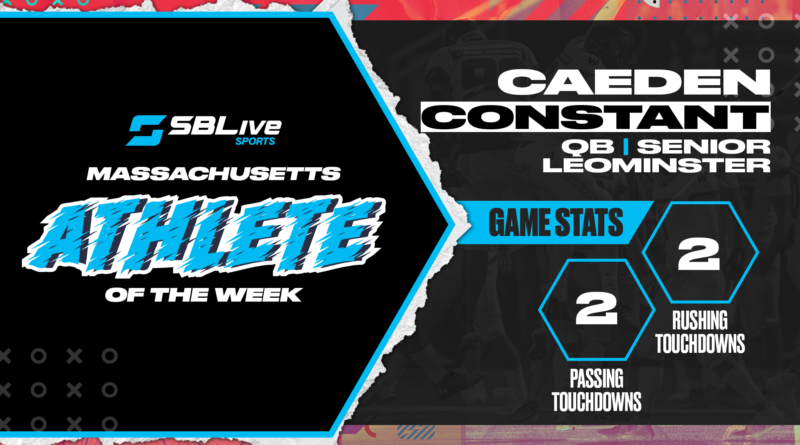 Congratulations to Leominster quarterback Caeden Constant for being voted SBLive’s Massachusetts High School Athlete of the Week for Nov. 22-28!

The senior accounted for four touchdowns – two passing and two rushing – to lead Leominster to a 32-0 win over Fitchburg.

Constant received 51.57% of the vote, beating out St. Bernard’s Damien Jones, who finished with 45.2%. Algonquin’s Paul Ramos finished third with 2.19% and South’s Angelo LaRose finished fourth with 0.18%. There were over 26,000 votes tallied this week!

Abney rushed for 130 yards and three touchdowns in a 44-8 win over Ayer-Shirley.

Burke carried the ball 21 times for 137 yards and two touchdown in Quaboag’s 22-7 win over Ware. He also racked up 16 tackles on defense.

Colon-Martinez rushed for 78 yards and two touchdowns in Tantasqua’s 20-16 win over Shepherd Hill.

Dimond rushed for three touchdowns and threw for another TD to lead Grafton to a 35-7 win over Millbury. Dimond finished with 267 yards of total offense.

Faulha carried the ball 27 times for 362 yards and five touchdowns to lead Quabbin to a 34-0 win over Gardner.

Haire returned a kickoff 85 yards for a touchdown in Doherty’s 38-7 win over Burncoat.

Hostage accounted for five touchdowns – three passing and two rushing – to lead Algonquin to a 49-0 win over Westborough.

Jones rushed for 137 yards and four touchdowns and intercepted three passes to lead St. Bernard’s to a 48-14 win over St. Paul.

Lambert ran for two touchdowns and passed for a third TD to lead Oxford to a 41-14 win over Bay Path.

LaRose carried the ball 15 times for 189 yards and three touchdowns to lead South to a 50-6 win over Worcester North. His performance put him at 2,905 rushing yards for the season, which is a Massachusetts single-season state record.

Manu Jr. returned a kickoff 76 yards for a touchdown and rushed for a 12-yard TD in Worcester Tech’s 32-14 win over Abby Kelley.

Mero rushed for three touchdowns, threw a TD pass and kicked a field goal in a 34-31 loss to Auburn.

O’Sullivan passed for a touchdown and rushed for a TD to lead Shrewsbury to a 14-13 win over Wachusett.

Ramos carried the ball 10 times for 102 yards and a touchdown and caught a touchdown pass in a 49-0 win over Westborough.

Salmon rushed 19 times for 312 yards and four touchdowns in Nashoba’s 47-19 win over Clinton.

Worthington caught 9 passes for 128 yards and a touchdown in a 22-7 win over Ware.