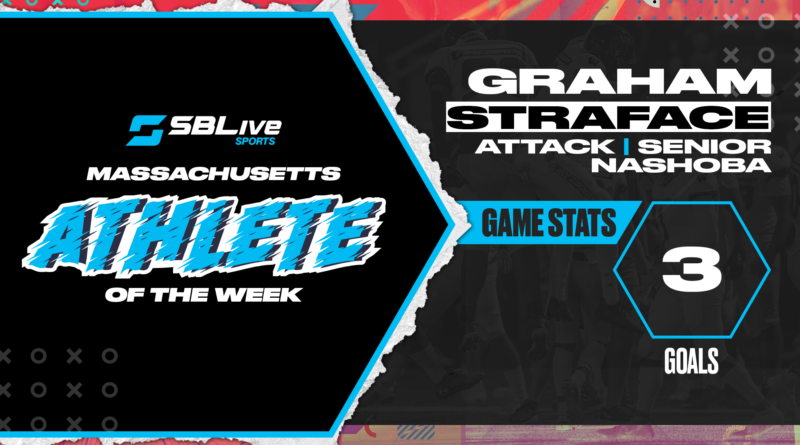 The senior recorded a hat trick to lead Nashoba to a 7-1 victory over Algonquin on Oct. 8.

Straface received 51.7% of the vote, beating out Norton volleyball’s Kate Andy who finished second with 47.06%.

Kelly totaled 26 kills and added five service aces and two digs to lead Mansfield to a 3-1 victory over Canton and a straight-set victory over Attleboro.

Gosselin scored two goals to lead Hopedale to a 4-1 win over Notre Dame Academy on Oct. 8.

Dutkewych scored a goal and added two assists to lead Bromfield to a 5-0 win over Oakmont on Oct. 7.

Borges carried the ball 18 times for 102 yards and two touchdowns in Marlborough’s loss to Fitchburg.

Boyce rushed for 225 yards and a touchdown and threw for 90 yards and two touchdowns in a 28-20 OT loss to Grafton.

Dimond rushed for 115 yards and three touchdowns and passed for 141 yards and one TD to lead Grafton to a 28-20 overtime win over Northbridge. The TD pass turned out to be the game-winner in overtime.

DiTavi rushed for 101 yards and two touchdowns in Maynard’s 32-0 win over Groton-Dunstable.

Gray rushed for 168 yards and two TDs to lead Oakmont to a 27-0 win over Hudson.

Holmes ran for 113 yards and two touchdowns and passed for 70 yards and a TD to lead Ayer-Shirley to a 36-13 win over Quabbin.

Humphrey rushed 30 times for 196 yards and three touchdowns to lead West Boylston to a 35-14 win over Tyngsboro.

Jean-Jacques returned an interception 85 yards for a touchdown and caught a 19-yard TD pass in a 22-14 win over Lexington.

Lockbaum returned an interception 80 yards for a touchdown in Doherty’s 28-14 loss to Wachusett.

Marshall scored three touchdowns in Ayer-Shirley’s 36-13 win over Quabbin. His TDs came on a 60-yard punt return, a 27-yard reception and a 46-yard run.

Murphy passed for 207 yards and a touchdown in Reading’s 26-17 win over Woburn. The touchdown pass was the 45th of Murphy’s career, which broke the school record for career TD passes.

Oquendo ran for 260 yards and three TDs to lead Fitchburg to a 42-34 win over Marlborough.

Peters rushed for two touchdowns in Shrewsbury’s 30-13 win over Nashoba.

Shaw rushed for 200 yards and three touchdowns to lead Governor’s Academy to a 49-27 win over Brooks.

Wolfendale threw for 420 yards in a loss to Governor’s Academy on Saturday.