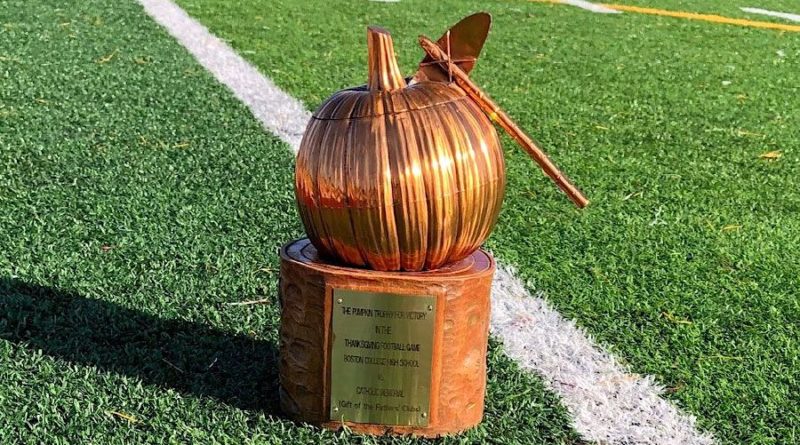 SBLive took a look at football rivalries across the state and ranked the top 10 rivalry games.

Did we miss a great rivalry? Do you disagree with our rankings? Let us know in the comments or hit us up on Twitter or Instagram @sblivemass.

This Massachusetts high school football rivalry dates back to 1893. Everett is a football powerhouse and has won 70 of the 128 meetings between the two teams, including the last 25 of 27 games. Everett is currently ranked No. 5 in the state.

There is not just a home-field advantage in this rivalry, but a home-Island advantage. The visiting team must travel 15 miles by boat to play the game. Nantucket has won 35 of the 64 meetings, but Martha’s Vineyard has dominated recently, winning 11 straight. The two teams play for the Island Cup each season. The game is set to be played at Nantucket Oct. 30.

This out-of-conference rivalry game has been played 109 times. The last 52 meetings have occurred on Thanksgiving. Before the last meeting between these two teams, Abington had already punched its ticket to Gillette Stadium to play in the Div. 7 state championship. With a state championship matchup against Leicester looming Abington could have rested its starters. They decided not to and captured a 27-14 victory over Whitman-Hanson and hoisted the “Turkey Day” trophy.

This Independent School League rivalry is well over 100 years old, dating back to 1886. The annual meeting between the two teams is known as Nobles/Milton Day and is the most anticipated game of the year for players, coaches and fans.

This year’s Nobles/Milton Day is scheduled to be played Nov. 13 at Milton Academy. The two teams did not play in 2020 due to a COVID-19 canceled season. Nobles and Greenough seek revenge this season after losing to Milton Academy 29-14 in 2019.

This annual rivalry game has taken place on Thanksgiving Day for over 100 years and since 2012 the two teams have faced off five times in the playoffs before the Thanksgiving game.

There is a tradition unlike any other before the two teams step onto the football field. The Rotary clubs of Winchester and Woburn for decades have celebrated the rivalry with a “Captains Luncheon” alternating sites each year. The Luncheon is an opportunity for both teams to show appreciation for one another and their respective communities, with a side of friendly banter before the big game.

For many in Foxborough and Mansfield, Thanksgiving represents family, food, and high school football. This rivalry dates back to 1895 and has been played annually on Thanksgiving Day since 1945.

There is certainly no love lost between these two teams. In 2019, a bench-clearing brawl spoiled the ending of the game, and the two teams did not shake hands after the game.

Since 1882, Needham and Wellesley have met for a “Turkey Day” rivalry game. In 2020, that changed due to COVID canceling the game. Instead, the game was played in the spring of 2021 and the outcome was Wellesley winning in a 34-0 rout.

The “Turkey Day” rivalry will resume this year and Needham looks for revenge after the spring beat-down Wellesley put on them. Wellesley has a slight head-to-head advantage winning 64 of the 133 meetings between the two teams.

Last year the game was played in April because of the COVID-19 spring season. Fourth-ranked Xaverian went on to beat No. 10 St. John’s Prep 35-14 in a Catholic Conference showdown.

The Boston Latin vs. Boston English Thanksgiving football game is America’s oldest continuously played high school football rivalry. The last matchup between these two Boston schools was in 2019 when Latin won 16-6. Boston Latin has an 82-38-13 lead in the series and has won the last six matchups between the two teams.

For much of the time, this rivalry game has been played at the historic Harvard Stadium, but in 2020 the game was put on pause due to COVID-19.

The rivalry is set to resume Nov. 25 at a full Harvard Stadium.

This longstanding rivalry game between two perennial powerhouse high school football programs has occurred on Thanksgiving annually since 1962. The winner of the Thanksgiving Day game wins the Pumpkin Trophy (pictured above). The two teams met last year in the spring and Catholic Memorial came away with the 35-7 victory.

Catholic Memorial (4-0) sits at No. 1 in the latest Massachusetts high school football rankings, while BC high is currently winless (0-5). In past years these two teams were at the top of the rankings and the Thanksgiving game was one of the most anticipated high school football games in the state.

It will be interesting to see if BC high can salvage their season and pull off an upset when these two teams meet on Thanksgiving Day.