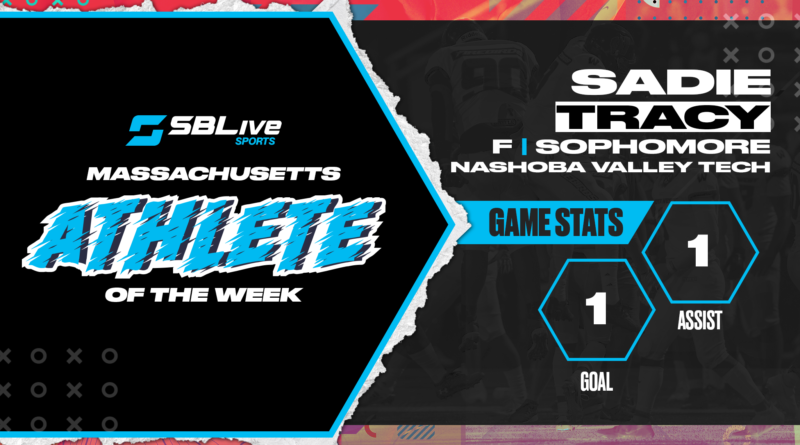 The sophomore striker had a goal and an assist in Nashoba’s 3-1 win over Lynn Vo-Tech on Sept. 24.

Tracy ran away with this week’s honor, receiving 62.98% of the total vote.

Campbell recorded a hat trick to lead Plymouth North to a 6-0 win over Plymouth South on Sept. 23.

Cueva had 10 aces, eight kills and six digs to lead Tewksbury to a straight-set victory over Lawrence.

Anderson had a pick-six in West Bridgewater’s 49-0 win over Bourne.

Charles caught two touchdown passes – including a 99-yarder – to lift Quincy to a 41-27 win over Westwood.

Constant scored two touchdowns and recovered a fumble to lead Leominster to a 13-7 win over Nashoba.

Coulstring rushed for 210 yards and three touchdowns to lead Rockland to a 23-7 win over Whitman-Hanson.

Craig rushed for three touchdowns and passed for two more to lead Chelmsford to a 43-8 win over Dracut.

Curran had nine receptions for 141 yards and three touchdowns in Hanover’s win over Dighton-Rehoboth.

DelValle rushed for 145 yards and two touchdowns to lead Salem to a 24-6 win over Greater Lawrence.

Gianibas scored three touchdowns to lead Hull to a 28-6 win over Tri-County.

Gordon rushed for five touchdowns to lead Foxboro to a 51-14 win over Plymouth South.

Landolfi threw for 235 yards and five touchdowns and added a rushing TD to lead Hanover to a 47-13 win over Dighton-Rehoboth.

Lodewick intercepted two passes, including a pick-six, to help Masconomet to a 40-8 win over Winchester.

Masterson threw three touchdown passes and rushed for one to lead Marshfield to a 35-0 win over BC High.

Murphy passed for two touchdowns and ran for two more to lead Plymouth North to a 28-14 win over Pembroke.

Ritz had a receiving touchdown, a rushing touchdown and kicked a field goal to lead Weymouth to 23-10 win over Hingham.

Sullivan had four catches for 145 yards and a touchdown in Scituate’s 35-0 win over Malden Catholic.

Capes has medaled and finished with the lowest score in 4 out of 5 Algonquin High School varsity golf matches helping to lead the team to a 4-1 start.