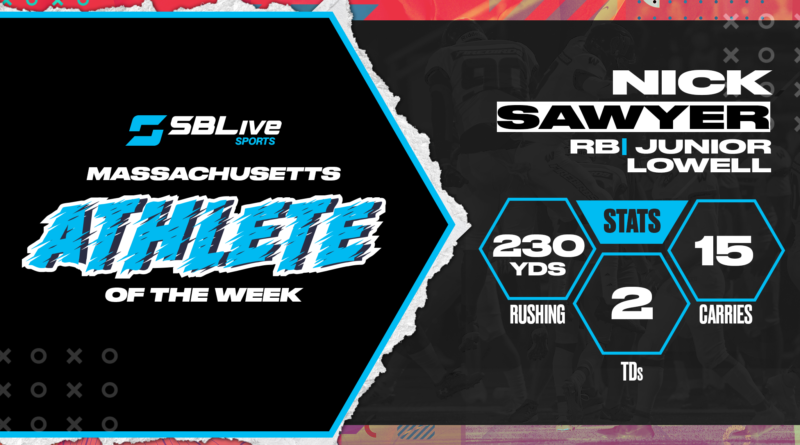 Congratulations to Lowell Catholic running back Nick Sawyer for being voted SBLive’s Massachusetts High School Athlete of the Week for Sep. 13-19!

The junior carried the ball 15 times for 230 yards and two touchdowns to lead Lowell Catholic to a 27-21 win over Ipswich.

Sawyer received 40.46% of the vote, beating out Chelmsford QB Dan Craig who finished second with 35.33%. Billerica RB Dom Gird finished third with 6.71% and Westfield field hockey’s Meghan Bowen finished fourth with 3.64%. There were over 28,000 votes tallied this week!

Scott recorded seven saves in a 3-1 win over Concord-Carlisle on Sept. 14.

Fyden had two goals and three assists to lead Hopkins to a 7-0 win over Hampden Charter.

Hennings recorded a hat trick to lead Smith Academy to a 6-0 win over Northampton.

Cooper scored two goals to lead Belchertown to a 5-0 win over Holyoke.

Bowen had two goals and two assists to lead Westfield to a 5-1 win over Northampton.

Acevedo-Torres carried the ball 16 times for 190 yards and two touchdowns in a 28-7 win over Malden.

Bennett returned a punt for a touchdown and caught a TD pass in Dover-Sherborn’s 28-7 win over Nipmuc.

Chaves had a pick-six on defense and caught a touchdown pass on offense in Winthrop’s win over Austin Prep.

Craig racked up more than 300 yards of offense and accounted for five touchdowns to lead Chelmsford to a 35-20 win over Lexington.

Gilbert accounted for three touchdowns – two passing and one rushing – to lead Xaverian to a 35-14 win over the Bridgewater-Raynham Trojans.

Gird ran for 164 yards and two TDs in Billerica’s win over Westford.

Landolfi threw for nearly 200 yards and three touchdowns to lead Hanover to a 34-0 win over East Bridgewater.

Marshall caught 5 passes for 115 yards and two TDs in Chelmsford’s 35-20 win over Lexington.

Nadworny carried the ball 20 times for 180 yards and two touchdowns in Masconomet’s 35-24 win over Peabody.

O’Driscoll caught five passes for 117 yards and a touchdown in Wayland’s loss to Amesbury.

Pallazola scored four touchdowns – two on offense, one on defense and one on special teams – to lead Manchester Essex to a 49-0 win over Nashoba Tech. He returned an interception 31 yards for a TD, returned a kickoff 80 yards for a TD and caught TD passes of 20 and 24 yards.

Petrongolo went 15-of-25 for 235 yards and three touchdowns to lead Catholic Memorial to a win over La Salle.

Quinlan starred on both sides of the ball in Hanover’s 34-0 win over East Bridgewater. He caught 5 passes for 75 yards and a TD on offense and had two sacks and three tackles for loss on defense.

Roenkranz had a pick-six on defense and caught three passes for 126 yards and two touchdowns on offense to lead Boston Latin to a 34-12 win over O’Bryant.

Scott rushed for 192 yards and two touchdowns to lead Holbrook/Avon to a 28-22 double OT win over Wareham.

Sutton carried the ball 17 times for 97 yards and a touchdown in Wayland’s 22-14 loss to Amesbury.

Sweeney racked up 125 yards and a TD on the ground in Malden Catholic’s 31-0 shutout of Gloucester.