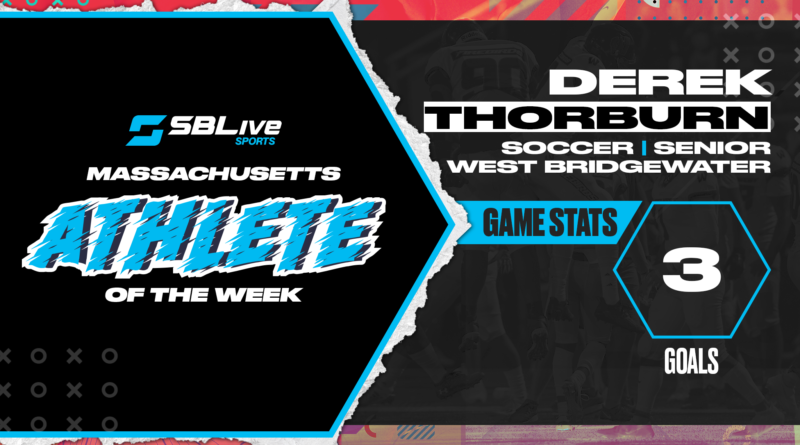 The senior recorded a hat trick to lead West Bridgewater to a 5-0 win over Abington.

Thorburn ran away with this week’s honor, receiving 67.34% of the total vote.

Ouellette scored two goals to lead Bishop Feehan to a 3-1 win over Medfield on Sept. 11.

Leonardo totaled 33 kills in wins over Foxborough and Oliver Ames.

MacDougall recorded 16 saves to lift Dedham to a 2-0 victory over Milton on Sept. 11.

Fiore scored three goals to lead Acton-Boxborough to a 6-0 shutout victory over Westford Academy on Sept. 11.

Zinda booted home two goals to lead Waltham to a 3-0 win over Cambridge.

Arpano threw for 136 yards and three touchdowns – all in the first quarter – and added a rushing TD to lead Lunenburg to a 53-0 win over Bartlett.

Dimond went 5-for-5 for 70 yards and two touchdowns and rushed 17 times for 209 yards and four TDs to lead Grafton to a 41-21 win over Nashoba Regional.

Greene scored two rushing touchdowns and caught a touchdown pass to lead Brighton to a 36-6 win over O’Bryant.

Hamawi had eight tackles and two sacks in Grafton’s win over Nashoba Regional.

LaRose rushed for 204 yards and two touchdowns and picked off a pass on defense in South’s loss to Watertown.

Mohamed scored the game-tying touchdown and game-winning two-point conversion in overtime to lift Everett to a 21-19 win over Xaverian.

Perry threw three touchdown passes, including the game-winning TD with five seconds left, to lift St. John’s Prep to a 47-42 win over Marshfield.

Pereira had more than 600 yards of total offense and accounted for 10 touchdowns to lead Central Catholic to a 67-52 win over Springfield Central.

Rodolakis carried the ball 17 times for 119 yards and two TDs in St. John’s loss to Mansfield.

Tenney carried the ball 21 times for 110 yards and a touchdown in Murdock’s 21-6 win over Monty Tech.