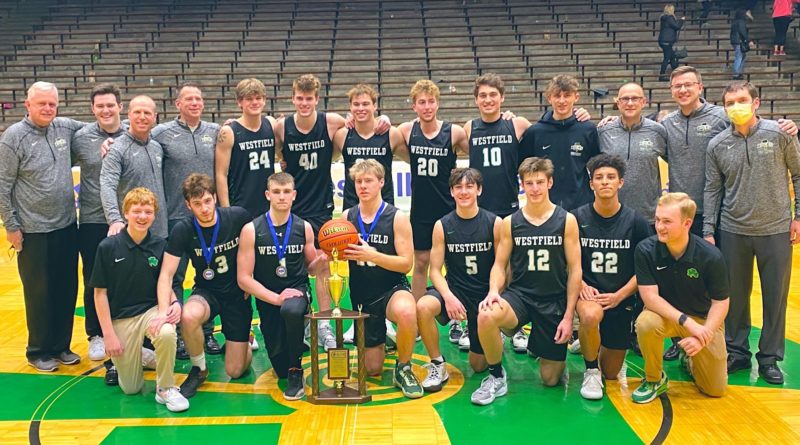 A scrappy and determined Westfield team completely outplayed Cathedral 74-63 in the championship game of the 2021 Hall of Fame Classic Thursday night inside the New Castle Chrysler Fieldhouse, the largest high school basketball gym in the world.

The Purdue-bound point man was electric with the ball in his hands, creating for his teammates. In fact, he was much the same way in the first game. Smith scored just nine points during Westfield’s victory over Connersville during the first round of games earlier Thursday, and that’s how he played again in the evening’s title tilt.

Listed at 6-feet tall, Smith is an elite athlete with the hops to play above the rim. Those physical traits combined with his ability to create an incredible number of opportunities for his teammates helped Westfield blow open a 50-30 lead over Cathedral in the third quarter.

Deflections on defense, managing the offense, and even rebounding – Smith was Westfield’s catalyst.

Cathedral’s lineup featured more players with a future at the college ranks – all of their starters are underclassmen too – but they did not compete nearly as hard nor did they communicate nearly as well. That’s especially true on the defensive end where Smith carved up Cathedral along the edge of the three point line and by hitting cutters to the bucket.

Even with just a 30-23 lead at halftime, it was obvious that Westfield was the superior team. The ball movement, the attitude, the energy on defense.

Give Cathedral credit. The Irish made a run in the fourth quarter and had it down to a six-point game, but the horrible third quarter did in the Cathedral effort and they came up short against a much more mature and team-oriented Westfield squad.

Congrats to Westfield for winning its first Hall of Fame Classic. Here are a few additional notes:

— While not yet a consistent player, Cathedral junior Xavier Booker is a clone of former NBA star Sam Perkins in terms of body type of shooting stroke. He knocked down three triples in the first quarter of the championship game alone. He’s extremely long and athletic. He just needs to play with a higher motor. His tool bag is huge and it’s why he’s been offered by numerous programs already.

— Purdue signed a tremendous guard in Fletcher Loyer from Homestead. He’s as smooth a shooter as anyone will see. He knocked in 24 in the first game and had 17 in the first quarter alone in the consolation game. When he’s on it’s just fun to watch. Loyer can hit shots off the wrong foot and with a defender in his face.

— Connversville may not have won today, but that’s going to be a quality ball club in the 3A state tournament. Patient, hard working, and always working hard on defense. The Spartans have been a really good program the past several years and there’s no reason to think that’s going to change with this year’s team.