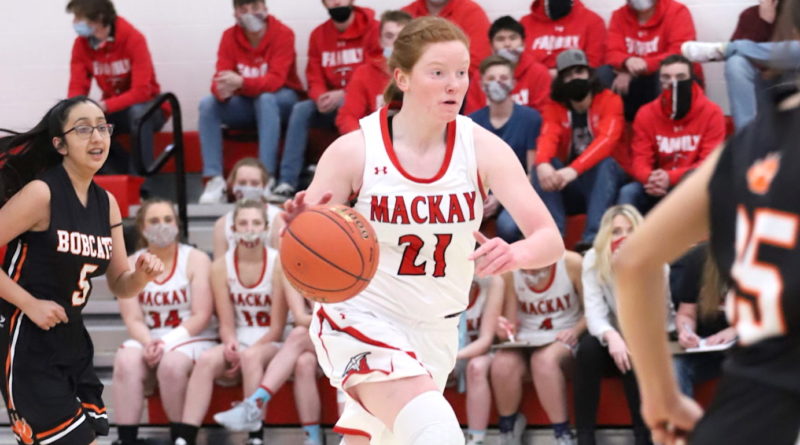 Here is an inside look at the Top 20 players in Class 1A Division II Idaho high school girls basketball.

There are dozens of standout 1A D-II girls basketball players in Idaho and these lists are not intended to be comprehensive. DM or tag us on Twitter or Instagram @sbliveid and let us know about players worthy of fans’ attention in 2020-21.

The Blue Devils didn’t qualify for state, but the future still looks bright with what their young up-and-coming star did for them this season. Hailey Astle, the daughter of head coach Rick Astle, who was the long-time assistant of legendary coach Acey Shaw, had double-digit points in nearly all of her games. Her 2020-21 performance should land her on the All-Sawtooth Conference list.

Botz led the Mushers to their first state tournament appearance in program history in just three years. She is averaging almost 17.0 points, 7.0 rebounds, 4.0 steals and 3.0 assists per game a year after being both the team’s MVP and an All-Sawtooth Conference selection. Botz has already had the likes of Carroll College, Saint Mary’s of Notre Dame, St. Catherine’s University, Belmont Abbey, Covenant College and St. Olaf’s University all reach out to her about playing at the next level.

“Ashly has a high basketball IQ and is like having a coach on the floor,” Camas County coach Jon Botz said. “She is very unselfish and will play any role the team needs to succeed.”

The Bulldogs won the first state championship in program history last season. And Boyer was the driving force behind that run. The 5-foot-10 wing basically averaged a double-double for the season with 9.7 points and 10.4 rebounds per game to earn both All-Rocky Mountain Conference and All-State second-team honors. She’s even better this season and is actually averaging a double-double of 14.0 points and 10.7 rebounds a game.

“Kiersley is a team leader by example,” Rockland coach Vern Nelson said. “She is a player with a good upside that should continue to help her become even a better player.”

An ACL injury to last year’s All-State point guard Lotus Harper suddenly left the Savages without a ballhandler. But lucky for them, Branstetter was more than up for the task. She more than doubled her scoring from last season with 15.1 points to go along with 5.5 rebounds and 4.6 assists per game in 2021.

“Sofie has stepped up and taken a lot on her shoulders,” Salmon River coach Paula Tucker said. I’m very proud of the way she has handled the difficult task of taking on the point guard position – the last spot she ever dreamed of playing.”

Castillo couldn’t have had a better debut last season. She led the team in every statistical category except for steals and racked up All-Long Pin Conference accolades in the process. But somehow she’s topped even that. Castillo has tied the school record for most assists in a game (11) and broke the school record for assists in a single season. Oh yeah, she’s also tallying 16.0 points, 7.0 rebounds, 7.0 assists, 4.0 steals and 3.0 blocks per game to firmly put her in the Player of the Year conversation.

“Gracie has proven to be a leader of our basketball team as only a sophomore,” Garden Valley coach Mike Chandler said. “She has the dedication and work ethic that sets an example for everyone on our team.”

While the Bulldogs returned Kiersley Boyer, they lost pretty much everyone else from that state championship team from a year ago. However, Farr has helped offset that loss in a major way. The 5-foot-10 post nearly has a double-double for the season with 11.2 points and 9.6 boards per game. It has resulted in quite the 1-2 punch for Rockland with her and Boyer.

“Ember has become an inside force for our team this season; both offensively and defensively,” coach Vern Nelson said. “Ember is one of the best offensive rebounders that I have coached. She scores a lot of her points on offensive rebounding put backs.”

The fifth-year program had its best season to date this year with a district tournament win. And Grayson played a pivotal role in it. Her stats shot up from 8 points and 5 rebounds last season to 14.5 points and 8.0 rebounds in 2021.

“Emma has made a huge jump this year to become a more complete basketball player,” coach Ryan Strehlow said. “In previous years Emma has had some inconsistencies from game to game on whether she will score or not, but this year she has taken a step to be a more consistent scorer where I know I’m going to get at least 10 points from her every night.”

Hollon is showing that big things do come in small packages. The 5-foot-5 playmaker orchestrated the Titans to their best finish in program history last season (third at state) with 11.3 points, 5.2 rebounds and 2.8 steals per game. She was an All-State first-team selection and the MVP of the Long Pin Conference that season as well. Hollon is averaging 12.6 points, 6.3 steals, 6.2 rebounds and 5.1 assists per game this year, which has kept Tri-Valley’s two-year unbeaten streak in conference play firmly intact. She is signed on to run cross country and track at Eastern Oregon, but will try out for the basketball team too.

“The thing about Emma is that you see so much more watching her than her stats show,” Tri-Valley coach Lili Springer said. “She brings such a presence to the game and makes things happen that are not shown on stat sheets.”

Horton put up 11.2 points and 6.2 rebounds per game for the Indians this season. The 5-foot-10 post is also a 4.0 student in the classroom and is wanting to go to Gonzaga for business management. She may just walk-on to the basketball team there as well.

Jones completes arguably the best backcourt in the entire classification. She made the All-State Tournament and All-Long Pin Conference first teams last year. This year, Jones is putting up 14.0 points, 4.0 rebounds, 3.4 steals and 3.0 assists. It’s led to the Titans winning the district championship for the second year in a row. Jones has University of Montana Western interested in her.

“She has really stepped up her defense this season making her more of a threat as a well rounded player,” coach Lili Springer said. “She shines the brightest in the biggest games.”

When Kent first walked through the doors four years ago, the Tigers were coming off a 3-win season. Four years later, they were within eight points of a state tournament appearance. She also leaves as a two-year captain and an All-Sawtooth Conference player, an honor she should get again after averaging 8.0 points, 4.0 rebounds, 3.0 assists and 2.0 steals per game this season.

“Great leader on and off the floor,” Richfield coach Buck Hendren said. “Has weathered the storm of three pretty tough seasons to help Richfield girls basketball be a legitimate contender again.”

From the moment Moore first suited up on varsity as a freshman, her future seemed bright. Three years later, that’s exactly what happened. She’s been an All-Rocky Mountain Conference player for three years running now with a fourth all but guaranteed. And last year she added All-State honors to her resumé with 14.3 points, 4.4 rebounds and 4.1 assists per game. Moore reached the 1,000-point club this season and is averaging 14.6 points, 5.1 assists and 4.6 steals per game.

“She puts 100% effort into everything she does,” Mackay coach Kashia Whitworth said. “One of the hardest working athletes to go through Mackay High School.”

The Tigers just won the District II title for the third consecutive year, and Morgan played a huge part in that feat. She is averaging 14.6 points and 6.0 rebounds this season. But this is nothing new for the 5-foot-10 forward. Morgan’s been on varsity since the 8th grade when she got permission to suit up because Kendrick only had 6 players that season. She also earned All-Whitepine League first-team honors a year ago.

What could have been. After breaking out last season with 14.2 points, 3.1 rebounds and 2.4 steals to earn All-Long Pin Conference first-team conference honors, Nichols had already eclipsed those numbers when she went down with a season-ending injury three weeks ago. She still finished with 14.8 points, 5.0 rebounds, 4.3 steals and 3.0 assists per game.

“Sydney is a very natural athlete, not just an all around offensive player but also a lockdown defender as well,” Council coach Dan Shumway said.

“We depended on Jordyn for scoring and rebounding,” coach Paula Tucker said.

Seefried is following right in Riley Moore’s footsteps. She is already a two-time All-League selection with a third one surely to follow this season. But that’s not the only honor she might add to her resumé. She’s making a serious case for All-State consideration with 18 points, 5.7 rebounds and 3.3 assists per game, so she too, should soon join the 1,000-point club.

“Trinity is a great all-around player. She has a phenomenal shot and is a great team player,” coach Kashia Whitworth said. “She always puts 100% effort into everything she does.”

“Raquelle has done a great job of making the jump from her sophomore to junior year,” coach Ryan Strehlow said. “She looks a lot more comfortable with the ball in her hands, and really is doing a great job initiating the offense.”

Wentz deserves a lot of credit for the Wolverines’ success this season too. She was an All-Conference selection last season as well, and is on her way to doing so again with 13.0 points, 9.0 rebounds, 6.5 steals and 1.0 blocks per game.

“Katy has tremendous athleticism,” coach Mike Chandler said. “She is a great asset to our basketball team.”

Not to get lost in the fold of the Mushers’ best season to date is Whittle. A year after playing five quarters every night on junior varsity and varsity because of a shortage of players, she has embraced her new full-time role on varsity this season. She is racking up 15.2 points, 4.0 rebounds and 4.0 steals per game.

“This year she has worked hard to improve to a very good and complete player,” coach Jon Botz said. “She is a leader who has stepped up big this year and carries a heavy load for us.”

Wood is arguably the best player in the entire classification. And she’s in the discussion for the best player in Idaho as well. She is the state’s leading scorer at 27.2 points per game, which helped her break Jaide Parke’s all-time program record of 1,255 points in a 61-55 win over Camas County on Feb. 2. Wood, the 2020 State and Sawtooth Conference Player of the Year with 19.8 points, 5.8 rebounds, 3.2 steals and 2.1 assists per game, is now hoping to get Carey back to the state title game where it fell to Rockland last season.