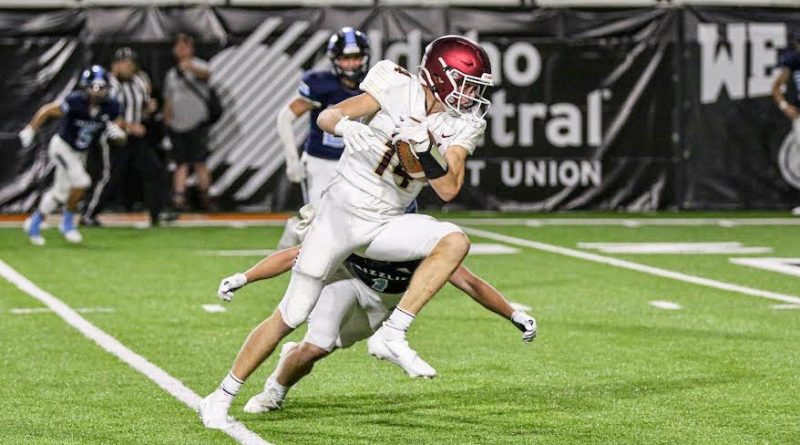 Here is an inside look at the top high school football games across the state of Idaho during the 11th full weekend – or quarterfinal round of the state playoffs – of 2021:

Game nugget: Grizzlies have won the past three meetings.

About the Rams: The Rams’ 32nd straight year in the postseason has been kind thus far. QB Jack Whitmer combined for 250 yards and five touchdowns against Skyview last week. But Rocky Mountain has had their number lately, including earlier this year in a 12-7 loss at home Aug. 21. However, Highland hasn’t lost to the same team twice in a season in 10 years. It also has RB Eli Parrish (693 yards, eight TDs) and WR Raimon Barela (716 yards, five TDs) to contend with.

About the Grizzlies: The reigning 5A champs have had two weeks now to sit and stew on a 26-6 loss to Mountain View in the 5A SIC title game. It was one of the worst losses in recent memory for the Grizzlies, who’ve won two out of the past three state titles. However, they haven’t lost back-to-back games in nine years. And QB Tegan Sweaney (1,798 yards, 19 TDs), RB Art Williams (587 yards, eight TDs), WR Hunter Steacker (636 yards, five TDs) and company don’t plan on starting now.

About the Warriors: Meridian got its first playoff win since 2007. But the Warriors are not satisfied. They want to take that next step as a program and this is their opportunity. Meridian was arguably Mountain View’s toughest opponent this season, up 13-0 at halftime before losing in the final seconds. QB Malakai Martinez is back playing his best football, and RB Kross Antonnacchi (1,037 yards, 10 TDs) and WR Quentin Riley (741 yards, seven TDs) are firing, too.

About the Mavericks: Yes, they lived up to all the preseason hype – and more – with the first 5A Southern Idaho Conference title in program history. But the road to another state championship will prove to be no easy task, especially against the Warriors, whose three losses have come by a combined five points. However, Mountain View boasts the No. 1 defense (9.8 ppg), top RB Quintez Evans (1,010 yards, 14 TDs) and QB Dawson Wahl (1,509 yards, 16 TDs).

Game nugget: First meeting between the teams since 2016.

About the Mustangs: It’s hard to imagine the Mustangs were, at one point, on the verge of posting a losing record midseason. They’ve now won six consecutive games, including five in a row by double digits. Eagle did lose leading RB Deegan Martinho (701 yards, 10 TDs) to a knee injury. But RB Roy Hull (508 yards, eight TDs) has proven to be quite the capable runner, as has QB Jack Benson, who is good with his arm, too, with 1,771 yards and 16 TDs.

About the Vikings: A few weeks ago, after a loss to Post Falls, they were in jeopardy of missing the playoffs altogether. Now they’re hosting yet another playoff game. Coeur d’Alene, which has advanced to four consecutive 4A semifinals, will need to keep the momentum it found against Lewiston (won twice in regular season, “Kansas” tiebreaker). QB Brayden Bengtson (1,734 yards, 15 TDs) has a plethora of weapons at his disposal, including WR Isaiah Griffin.

About the Eagles: The Todd Simis farewell tour carries on. The Eagles made sure the coach of 18 years got to the quarterfinals with their first win over a ranked opponent all season in Lewiston (44-13) last week. But Capital is going to have to play its best game all year if the last ride is going to continue. The Eagles do have productive QB Max Clark (2,808 yards, 29 TDs) and DE/TE Kody Walk (58 catches, 768 yards, 10 TDs), who totaled five sacks and two TDs last week, in tow.

About the Trojans: Rigby didn’t need any more motivation. The Trojans have just that after having to sit and wait following a stunning loss to Madison in the regular season finale. They’ll now have someone besides themselves to take the frustrations out on. QB Tiger Adolpho, a Weber State commit, WR Taylor Freeman, who seems to be over his ankle injury and RB Zheik Falevai are quite the trio, as is Rigby’s defense, which is only allowing 14.4 points per game.

About the Knights: A 21-0 loss to Emmett seems like ages ago. It’s because since then, the Knights have rattled off seven consecutive wins, six by double digits, including a 49-21 win over Twin Falls in the 4A opening round. Bishop Kelly will likely lean on all-state RB Seth Knothe (1,799 rushing yards, 32 TDs), who is in position to become the school’s first 2,000-yard rusher ever. But the Knights can spread the field, too. with QB Hadley Smith and WRs Jason Buss and Jack Heffner.

About the Thunder: This is the Thunder’s big opportunity to show that they’re the team to beat in 4A against the king’s of the classification in the six-time state champion Knights. This is also an opportunity for payback from last year’s loss. Ryan Payne has made a smooth transition to quarterback, and Ryken Echohawk is one of the best tailbacks in the state right now.