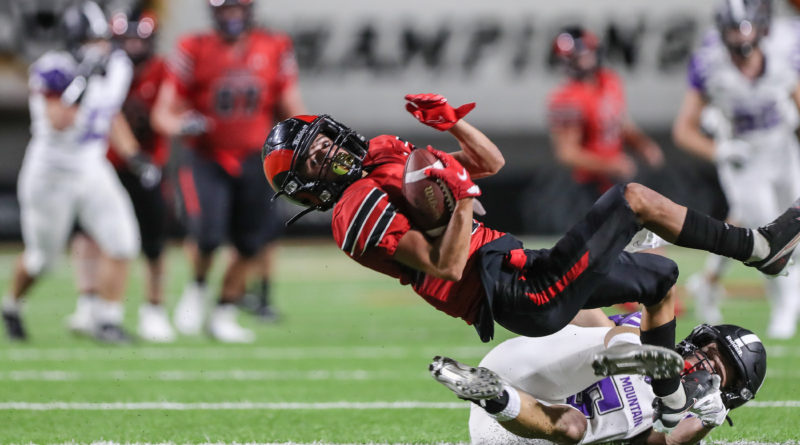 This week: Hosts No. 5 Highland on Friday night.

It wasn’t pretty with two turnovers and three key players going down with injury, including preseason all-state linebacker Logan Fredericksen, but the Trojans still found a way to grind out another win, thanks to three Tiger Adolpho touchdowns.

This week: Travels to Kuna on Friday night.

The Mavericks officially punched a ticket to their first ever 5A Southern Idaho Conference game by wrapping up the River Division title – with Quintez Evans racking up 169 yards and a pair of touchdowns.

This week: Hosts No. 7 Meridian on Friday night.

After being on upset alert for much of the first half, the Grizzlies scored 21 unanswered points and shut out the Wolves in the second half for their 10th consecutive win against them, paced by Tegan Sweaney’s three touchdowns.

The Vikings opened up Inland Empire League play with a bang, notching their sixth win in a row over the Trojans as Brayden Bengston threw for 224 yards and three scores.

This week: Travels to No. 1 Rigby on Friday night.

After a much-needed bye week following seven consecutive games, the Rams return to the gridiron in arguably the most anticipated game of the week in a showdown with the Trojans for the 5A High Country title.

Remember when the Mustangs lost back-to-back games and were on the brink of a losing record? Yeah, neither does this proud team. Jack Benseon threw for 265 yards in last week’s win.

This week: Travels to No. 3 Rocky Mountain on Friday night.

Kross Antonnacchi rumbled for 164 yards and two scores, but the real story may be Malakai Martinez seems to finally be at full strength, throwing for three touchdowns in his first full game since August.

The top team in 3A posted back-to-back shutouts in holding the Pirates to just 119 yards of total offense while Hayden Kincheloe rumbled for 343 rushing yards and four touchdowns.

The Trojans haven’t been 8-0 in a decade, they look to be in a pretty good position to do just that by playing against an undermanned team with just 16 varsity players.

This week: Travels to Aberdeen on Friday night.

The Pirates return from the off week and are ready to clinch their fourth consecutive 2A South East Idaho Conference title, while also extending the state’s longest winning streak to 28 games.