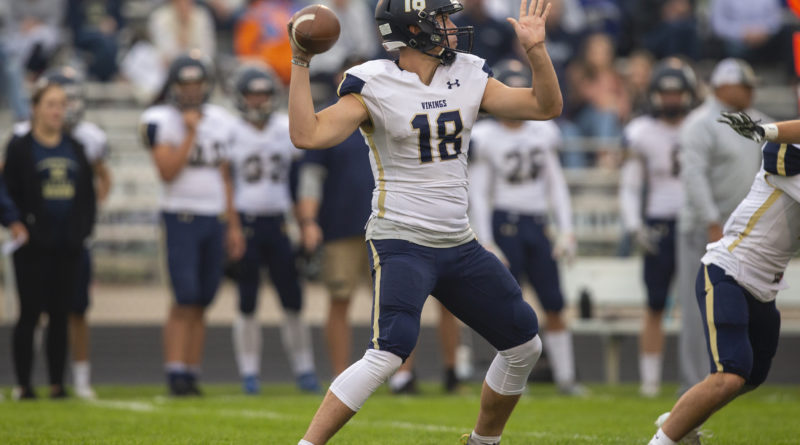 Here is an inside look at the top high school football games across the state of Idaho during the sixth full weekend of 2021:

Game nugget: The past two meetings have been decided by a combined five points.

About the Vikings: The last time Middleton faced a big tes,t it committed four turnovers in a 21-13 loss to No. 1 Minico on Sept. 3. But it gets another opportunity against the six-time 4A state champions. A win will move the Vikings up the 5A SIC standings, setting up a showdown with reigning league champion (and No. 2) Emmett next week. QB Ky McClure (1,446 yards, 11 TDs) and WR Owen Graviet (539 receiving yards) lead the Air Raid attack.

About the Knights: The Knights are also looking for that first top-10 win this fall. They’ve let it slip away from them twice – with losses to 5A No. 6 Eagle and No. 2 Emmett. Bishop Kelly needs to win this week, and have the Vikings upend Emmett next week to still have a shot at its first 4A SIC crown since 2018. The Knights will try and control the pace Friday with their run game – and that usually means a heavy dose of RB Seth Knothe (801 rushing yards, 16 TDs).

About the Tigers: The Cinderella season for Idaho Falls continues. The Tigers were losing by an average of 25.8 points per game at this time last year, and now they’re off to their best start in eight years. But those wins have come against teams with a combined record of 7-18. However, Idaho Falls can justify its sizzling start with a strong showing against the No. 1 team in the state. QB Skylar Olsen and RB Kyan Jesperson will have to lead the upset attempt.

About the Trojans: What’s left to say about the Trojans? Even with star WR Taylor Freeman (541 receiving yards, seven TDs) being limited last week, the Trojans still won big over Thunder Ridge. In fact, Rigby has beaten all of its opponents by double-digit margins (with a 32-point margin of victory average). QB Tiger Adolpho (1,126 passing yards, 14 TDs) and company shouldn’t treat the Tigers any differently in this 5A High Country Conference tilt.

Game nugget: Lewiston has won five out of the past six meetings.

About the Bears: Following a 2-0 start for the second consecutive season, Moscow has dropped two of its past three games, one of which was to 3A No. 5 Timberlake. For the Bears to get back on track and pull off the upset, they need to find a way to slow down one of Idaho’s highest-scoring squads just enough so their offense, led by QB Leon Hutton (1,372 passing yards, 11 TDs) and WR Cody Isakson (480 receiving yards), can find a groove.

About the Bengals: Days after entering SBLive ID’s “Power 10” rankings, Lewiston lost in a high-scoring affair at 4A Sandpoint – 42-41 in overtime – for its first loss. But this is an offense that knows how to score points and pile up yardage, led by WR-turned-QB Jace McKarcher (1,295 all-purpose yards, 17 TDs) and RB Cruz Hepburn (816 yards, 11 TDs), who form one of the backfield tandems in the state.

Game nugget: The programs faced each other for the first time in a decade last year (34-22 Diggers’ victory).

About the Indians: Preston was kind of the forgotten team in the 4A Great Basin during the preseason behind perennial powerhouse Centurey and the buzz around Pocatello. But it is the Indians who are atop the league standings heading into October. RB Emery Thorson does a little bit of everything for this offense – rushing (375 yards), receiving (146) and even passing (150). WR Tyler Lindhardt (355 receiving yards, seven TDs) leads pass-catching group.

About the Diggers: Since their unexpected 0-2 start, the three-time defending 3A champions have reclaimed a bit of that luster with back-to-back double-digit wins over Marsh Valley and Star Valley. This is an offense that has replaced a lot of last year’s skill-position talent with first-time regulars and underclassmen. That is what makes go-to senior WR Jonah Schulthies (345 receiving yards, two TDs) so valuable as the Diggers continue to find their footing.

Game nugget: This is the first meeting between the two teams since 2017.

About the Blue Devils: After committing five turnovers on Sept. 10 in a 32-16 loss to No. 4 Castleford that snapped their 13-game winning streak, the Blue Devils made a key positional switch. Cody Power moved from running back/wide receiver to the position his brother, Brady, manned in 2020 – quarterback. So far, it has worked out well as Power has thrown for 449 yards and seven touchdown passes in back-to-back wins.

About the Pirates: Coming off a 46-28 loss to No. 1 Raft River, Butte County had a bye last week to get ready for the defending 1A DII champions. There is a little extra motivation, too, after the Blue Devils won 36-14 a year ago. QB Tyler Wanstrom and RB Braxton Garnett are a handful out of the backfield, and proving to be quite the 1-2 punch. A win here would go a long way in enhancing program’s state-contending profile.