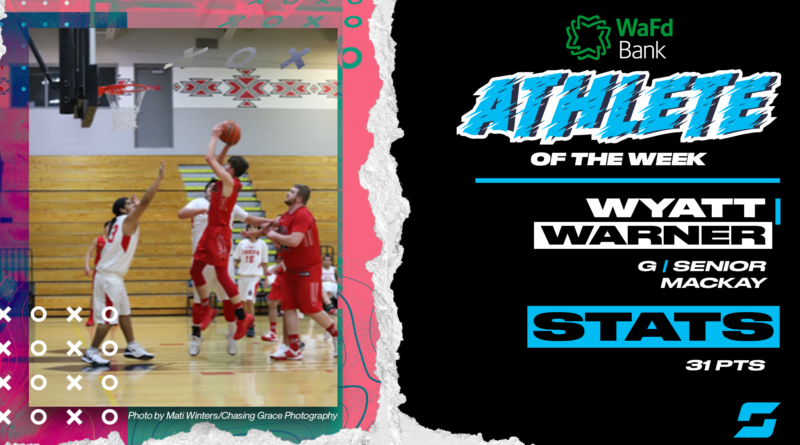 Warner scored 31 points in a big win over Sho-Ban, according to The Post Register of Idaho Falls.

Warner received 60.37% of the vote, beating out Thunder Ridge’s Lloyer Driggs, who finished with 30.52%.

Here are the other athletes who were nominated for the week of Feb. 1-7:

Blake Thurston, Cascade: Matched his season-high output with a game-high 41 points, including four 3-pointers, in a win over Council.

Joe Mpoyo, Meridian: The guard poured in a season-high 32 points and fie rebounds in a victory over Boise, the Idaho Press writes.

Hudson Hughes, Ambrose: Totaled a game-high 21 points in a victory over Melba, the Idaho Press writes.

Blake Munk, Rocky Mountain: Scored the game-winning bucket with 1.1 seconds to go as the Grizzlies topped No. 1 Meridian. He finished with a game-high 21 points, the Idaho Press writes.

Cooper Kesler, Hillcrest: Scored 27 points in a win over Idaho Falls, according to The Post Register of Idaho Falls.

Lloyer Driggs, Thunder Ridge: Scored 25 points in an overtime win against Madison, according to The Post Register of Idaho Falls.

Crew Clark, Sugar-Salem: Scored 19 points in a double-digit win over South Fremont, per The Post Register of Idaho Falls.

Kolton Mitchell, Lake City: Scored 20 points, including 5 of 6 shooting from 3-point range in a win over Lakelake, The Coeur d’Alene Press reports. He scored 15 points in the first quarter.

Dallin Criddle, Liberty Charter: Scored 15 points and grabbed 11 board in a win over Idaho City, reports The Idaho Press.

Gatlin Bair, Kimberly: Scored 18 points — more than half of his team’s offensive output — in a loss to Sugar-Salem, reports The Post Register of Idaho Falls.