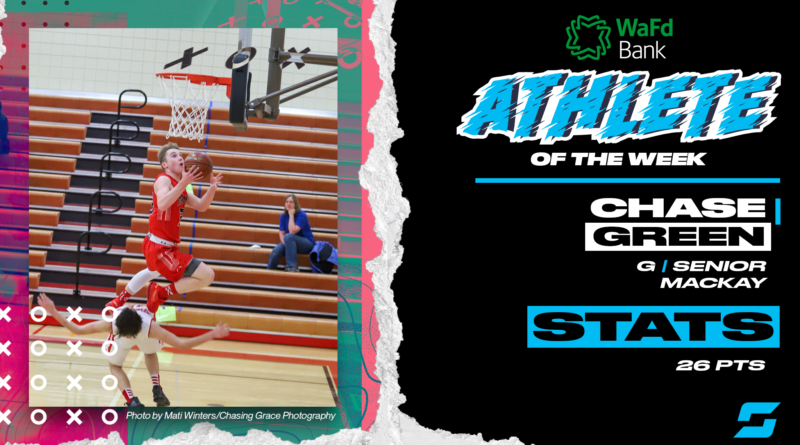 Green scored 26 points in a win over Leadore, reports The Post Register of Idaho Falls.

Green received 45.76% of the vote, beating out Columbia’s Joe Schulkins, who finished with 32.17%. Kellogg’s Kolby Luna finished third with 17.17% and Melba’s Braden Volkers finished fourth with 3.29%. There were over 25,000 votes tallied this week!

Here are the other athletes who were nominated for the week of Jan. 25-31:

Jacob Ankeny, Marsing: The forward dominated the pain with 30 points, 13 rebounds and three blocked shots in a win over Compass Charter, writes the Idaho Press.

Bryler Shurtliff, West Side: Went off for a game-high 29 points in a win over Soda Springs.

Karsen Barber, Rigby: Accounted for a game-high 29 points, including six 3-pointers, in a loss to Idaho Falls. Also scored 20 points in a win over Madison.

Dylan Seeley, Idaho Falls: Had a big night – 28 points, eight rebounds and the game-winning 3-pointer – in an upset win over Rigby.

Ryan Payne, Pocatello: Led all scorers with 24 points, but his team lost to Preston.

Joe Schulkins, Columbia: Had a game-high 23 points in a win over Emmett, writes the Idaho Press.

Lloyer Driggs, Thunder Ridge: Totaled a game-high 22 points in a win over Hillcrest, writes the Post-Register.

Gabe Hammons, Preston: Poured in a team-high 21 points in a win over 5A Pocatello.

Kolby Luna, Kellogg: Took over when his team needed it and scored most of his 17 points in the fourth quarter and overtime of a thrilling win over Timberlake, reports The Coeur d’Alene Press.

Ethan Riley, Timberlake: Hit six 3s on his way to 24 points in a four-point win over Wallace, reports The Coeur d’Alene Press.