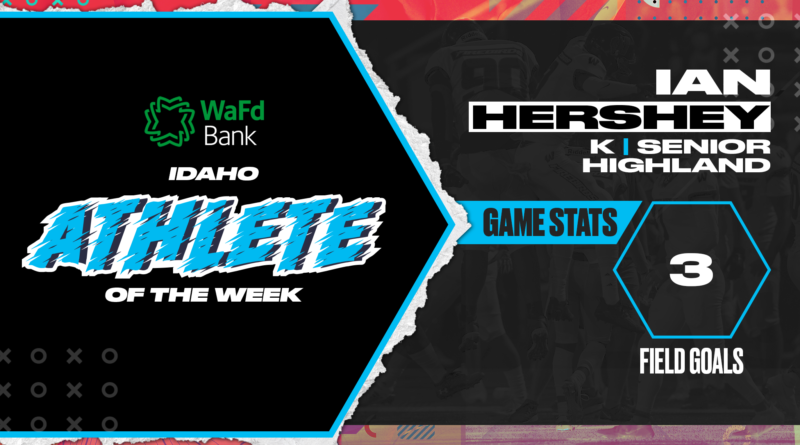 For the second straight week, the senior came up big with another three field goals, including a 40-yarder as time expired to send the Rams to their fifth state championship game in nine years in a 29-27 win over Eagle.

Hershey ran away with this week’s honor, receiving 64.75% of the total vote. There were over 18,000 votes tallied this week!

Tiger Adolpho, Rigby QB: Tallied 322 yards and six touchdowns himself, including the game-winning 2-yard run in a 55-49 triple overtime semifinal win over Meridian.

Kross Antonnacchi, Meridian RB:  Rumbled for three touchdowns and more than 100 yards, but it wasn’t quite enough as the Warriors endured a gut-wrenching 55-49 triple overtime semifinal loss to Rigby.

Payton Beck, Oakley QB: Went 14-of-17, including 11 completions in a row, for 304 yards and two touchdowns, while scoring another two on the ground in a 52-22 semifinal win over Butte County.

Isaac Cranney, Oakley WR: Came down with five catches for 106 yards in a 52-22 semifinal win against Butte County as the Hornets advanced to their third state title game over the last four years.

Ian Duarte, Eagle WR: Piled up 252 yards of offense, including touchdown grabs of 90 and 67 yards in a 29-27 semifinal loss to Highland.

Sam Krunz, Rigby WR: Recorded 10 receptions for 131 yards and a touchdown in a thrilling 55-49 triple overtime semifinal win over Meridian to get his team to a third consecutive state title game.

Lachlan Haacke, Skyline QB: Completed 22-of-25 passses for 240 yards and three touchdowns, with another on the ground in a 36-31 semifinal win over Pocatello.

Ty Koepp, Kendrick QB: Combined for 228 yards and five touchdowns, including 131 and two rushing, in a 46-30 semifinal win over Castleford to get the Tigers back to the title game for the first time in five years.

Riley Morey, Carey DB: Had not one, not two, but three interceptions, one of which he took back for a score, while also hauling in a 23-yard touchdown catch in a 54-20 semifinal win over Dietrich.

Parker Pettit, Sandpoint QB: Racked up 292 yards of total offense and three touchdowns while also running for the game-winning two-point conversion in a 29-28 overtime semifinal win over Blackfoot.

Kenyon Sadiq, Skyline WR: Had a career day with 12 catches for 136 yards and a pair of touchdowns to lead the Grizzlies to a 36-31 semifinal win over Pocatello for their fourth title game appearance in the last six years.

Brett Spencer, Weiser QB: Only missed on one pass in going 11-of-12 for 220 yards and five touchdowns, while running for another 40 yards and a score in a 49-27 semifinal win over Gooding.

Kole Spencer, Raft River RB: Did it on both sides of the ball with 154 yards and two scores on offense, while having four tackles, a sack and an interception on defense in a 51-6 semifinal shellacking of Lapwai.

Ethan Toribau, Oakley RB: Ran for two touchdowns and hauled in a 57-yard TD catch in a 52-22 semifinal win over Butte County.