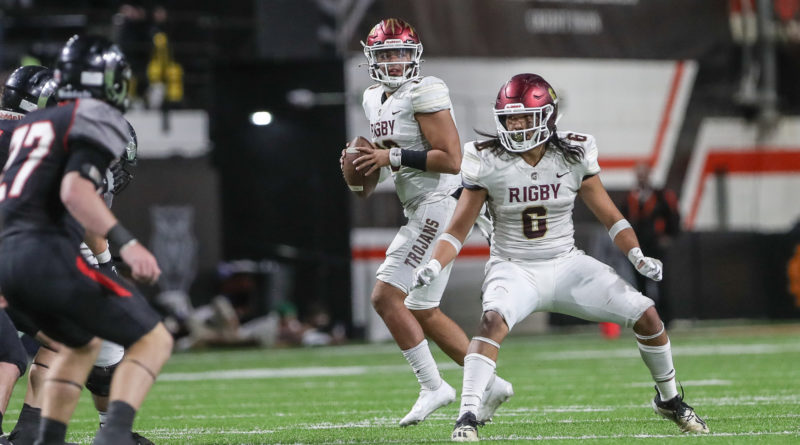 POCATELLO — Rigby’s Tiger Adolpho kept getting leis put around his neck during the postgame interview.

A year after being benched in the title game against Rocky Mountain, the senior quarterback returned to the scene with a four-touchdown performance to lead the Trojans to their second championship in three years in a 27-12 win over 11-time state champion Highland in the Class 5A final Friday night at Holt Arena.

“Great players have their greatest games on the greatest stage. What else can you say?’” Rigby coach Armando Gonzalez said. “And he shook the monkey off his back. It had literally been hanging on for three years now. So I’m happy for him as a teenager going into a young man that has matured in our program. That’s why I do this.”

PHOTO GALLERY: Scenes from Rigby’s 5A title win over Highland

It was the fourth consecutive state championship game appearance for Adolpho, who played in two others at Hawaii powerhouse Kakuku High School.

The storied program is notoriously a run-heavy offense that isn’t ideal for quarterbacks with aspirations to play at the next level. So Adolpho transferred to Rigby at the start of last season. He lit the state on fire by totaling nearly 2,300 yards of total offense and 20 touchdowns. But Adolpho turned the ball over multiple times in the first half of the 17-14 2020 championship loss and was sent to the sideline in favor of Taylor Freeman.

“That’s what fueled me the whole entire offseason to keep going,” Adolpho said. “When I got to here, I washed it.”

It seemed like it. He was on target nearly all night going 12-of-18 for 190 yards and three touchdowns with another one on the ground.

After a scoreless first quarter, Adolpho and the offense found their stride. He opened the game’s scoring with a 48-yard bomb to wide receiver Coleman Lords on the first play of the second quarter for the 7-0 lead.

Adolpho then hooked up with a familiar face who was sorely missed last week. He hit Freeman for a 23-yard touchdown to double up the lead at 14-0 with five minutes and six seconds remaining in the first half. Freeman missed last week’s three-overtime thriller against Meridian because of a broken arm he suffered in a quarterfinal win over Capital on Nov. 5. Rigby’s go-to receiver injured his right arm after planting it down on a reception. Freeman was initially told he would miss the rest of the season after having a titanium rod surgically implanted in the middle of his bone.

But that wasn’t going to stop Freeman, who also missed several other games with a partially torn tendon in his left ankle. He dressed down and got in on the action, even laying out Highland’s Godfrey with a big hit late in the game – cast and all.

“Oh … it means everything,” Freeman said. “Ever since fourth grade playing with the brothers out there, I’ve dreamed of this moment my whole life. So to go out there despite everything I’ve gone through and finish it off, it’s the best feeling in the world.”

Freeman wasn’t the only Trojan to battle injuries this season. They (11-1) had a bevy of guys out at some point this season, including linebacker Logan Fredericksen, who returned and played in Friday with a partially torn ACL. Rigby overcame mounting injuries, overtimes and a stunning loss to Madison in the regular season finale.

“Pain is sometimes necessary in order for you to grow,” Gonzalez said. “As much as human beings we hate that, we need to go through it sometimes. That game is making us a better football team right now.”

The Trojans finished it in the second half.

Adolpho, who is committed to Weber State, faked a pitch and juked a defender out of his shoes on a 15-yard touchdown run that gave them their biggest of the game at 21-3 with 4:46 left in the third.

The Rams (10-3) did show some life in the fourth quarter. Quarterback Jack Whitmer hit tight end Colton Sneddon on a 17-yard touchdown pass on the first play of the fourth quarter to give them a little momentum. But it was short-lived. Adolpho put an exclamation mark on his day with a 32-yard strike to wideout Brady Packer to make it a three-score game again at 27-10 with 9:18 to go.

Highland did get a safety after a Rigby snap on a punt sailed in the back of the end zone with 5:15 remaining. But the Rams failed to take advantage of it. Whitmer threw a pair of interceptions to defensive back Ryder Thompson to end the game and return the trophy to Rigby.

“Oh my gosh man. It’s still not even real,” Adolpho said. “You tell yourself all year, ‘Let’s go win a state championship.’ When you do it, it’s like, ‘We’re the best in the state.’ It feels great.”

It’s the first time in a decade the Rams have been beaten twice in a season by the same team.

The Trojans downed Highland 44-21 – the worst loss in five years – on Oct. 15. It was the first time the two High Country Conference rivals had ever met in the championship game.

Halfback Zheik Falevai and Lords both went for 100 yards on the day.

Whitmer passed for 173 yards and the Rams were held to 83 yards on the ground — a week after they posted 305 against Eagle.

”Tonight, we wanted no excuses,” Gonzalez said. “On this field, in front of all of Pocatello to see, ‘OK, who is the best team?’ That’s what it was about.”