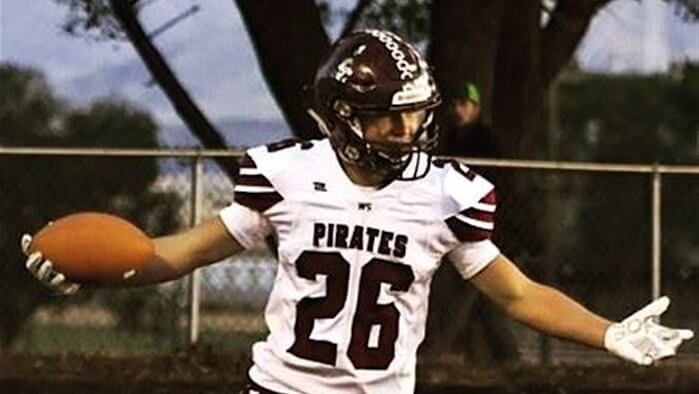 There was no overtime and a last-second play this time around. Top-ranked West Side made No. 3 Firth look like all the rest.

After having to pull off an overtime thriller over the Cougars in Week 1, the Pirates rolled to their 10th consecutive double-digit win in a 33-13 victory in the Class 2A state championship game Thursday night at Holt Arena in Pocatello.

West Side (11-0) extended the state’s longest winning streak to 32 games, and became the first team in classification history to win three state titles in a row. It was also the eighth championship in program history – the most ever in 2A.

In a rematch of last year’s final, the Pirates left little doubt. They never trailed and scored on the very first play of the game on a 70-yard run by running back Cage Brokens.

Idaho State commit and wide receiver Bryler Shurtliff got a preview of what it will be like to play at his new home next season with two catches for 104 yards and a touchdown. West Side put up 319 yards of total offense, but it was really the defense that won the game.

The Pirates forced three turnovers. The biggest of which was a 30-yard interception return for a touchdown by Owen Nielsen on Firth’s opening drive of the second half that pushed the lead to 26-7 with 11 minutes and 18 seconds remaining in the third quarter.

Shurtliff, who was responsible for two of the turnovers with a pair of fumble recoveries, then put the game on ice with an 89-yard touchdown reception from quarterback Blaze Brown on the opening play of the fourth quarter that made it 33-7.

They wrote 22-16 – the final score of their lone loss of the season to rival Raft RIver in mid-October – on the back of their undershirts. The extra reminder helped as Oakley got payback with a convincing victory Thursday in the 1A Di finals at Holt Arena in Pocatello.

It was the Hornets’ (11-1) fifth state title in program history and they became the first-ever 1A D1 team to repeat.

Oakley senior quarterback Payton Beck accounted for all but one of his team’s touchdowns. He went 20-of-23 for 261 yards and four touchdowns. He also ran for another 130 yards and a score, which was the first of the game on a 47-yard run.